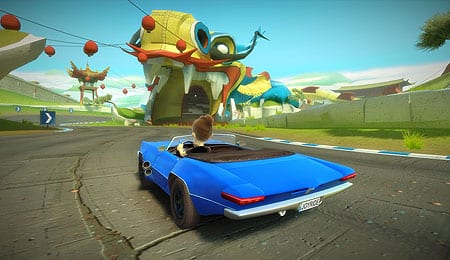 In this track, we “chase the dragon” pretty hard.

I was a little late to the Kinect party, finally picking up the Xbox 360 motion-control accessory a year after its release. So obviously, I missed out on some of the launch titles that ushered in the hands-free gaming experience. One of these games was the avatar-supporting racer Kinect Joy Ride, which earned mild praise but was described by most as an extended tech demo rather than a deep racer. Fast-forward to the present and Microsoft Studios has released a follow-up exclusively on Xbox Live Arcade, Joy Ride Turbo. Does it show how far the Kinect has come in the past year and a half? Um, no, because in this downloadable title, you’ll keep your Kinect parked and take a drive with your trusty controller.

Wait, hold up. So this means I have to drive a car… with a controller? Woof. Total Stone Age. Well, okay, I guess. Actually, this is better than okay — Joy Ride Turbo is one solid (albeit, familiar) controlling cart racer. Slam the gas with the right trigger, brake and reverse with the left and activate your weapon or assist items with the “A” button.  Drifting is a snap — just press “X” during your sharp turns. Whenever you get some air time from a ramp or speeding off a steep road, simply hold the stick in various directions to pull off spinning stunts. Big-time stunts and prolonged drifts charge up a turbo meter, which, when setting off with the “B” button, gives your car a quick boost of speed.

You don’t have to be a seasoned racer to get down with this fun. This Joy Ride handles smooth and easy when first starting up. It’s not until you step up to the higher class races that you’ll need to master some precision racing. The more advanced the vehicle, the more challenging the controls. That makes this racer highly accessible to all gamers, from casual to competitive.

Like its predecessor, Joy Ride Turbo is an avatar-supporting title, meaning that the entire presentation matches the appeal of the 360’s iconic user-based profile characters. The vehicles and environments are exploding with vivid colour and the animation is quite smooth. Equally joyous is the brassy soundtrack that happily accompanies every racetrack. Of course, this ride doesn’t have the intricate detailing and graphical prowess of a pro-racer like the Forza series, but this is definitely a quality presentation of the family-friendly variety.

Easily compared to the Mario Kart series, this is lighthearted racer with crazy physics and wild combat elements. As you speed through each lap, you’ll cross checkpoints lined with power-ups to steer the race to your advantage. Homing missiles, spiked balls, dummy power-ups and tanks of nitro commonly appear when in fair standing while more desperate items are dispatched when you are placing near to last, such as an ice blast that temporarily freezes opponents’ steering. The battle elements are rather fair and there isn’t an item that is grossly overpowering relative to another.

Starting off Joy Ride Turbo is the Championship Series mode featuring 10 unique tracks repeated in three speed tiers. You’ll need to place third or higher in each of the three vehicle classes within the tier to unlock the Grand Prix. Place third or higher in that series and you’ll be on your way to the next tier. This doesn’t mean you’ll automatically be upgraded with a faster vehicle. Every track carries a bevy of secret shortcuts and off-roads that contain car parts necessary to build and buy a new car. Find the three parts per car scattered across the entirety of the game’s raceways, earn coinage by winning races and then you’ll be suited with finer cars to tackle the more difficult series. This brings plenty of incentive for repeated gameplay to learn all the nooks and crannies that all 10 tracks have to offer.

This isn’t even including the free-roaming Stunt Park featuring two giant arenas designed to satisfy any driver’s hunger for exploration and open-world racing. Huge loops, half pipes, steep hills and ramps bring great potential for maximum air time and daredevil antics. In an effort to make sure you don’t miss a spot are skillfully placed trophies set to push your skills to the limit along with more car parts that allow for alternate builds of your vehicles.

A small gripe is that the assist items scattered in the park cater to combat, which really doesn’t fly too well in this mode. The only item that should pop up is the nitro for assistance in the most extreme stunt attempts. Also, you’ll get graded on stunt performance and awarded with coins but unfortunately, there’s no log or leaderboards for your insane achievements such as drift distance or air time. Nevertheless, time will easily slip by for perfectionists and completionists that want to win it all in this addictive mode of play

And of course, what’s a race without some friends? Joy Ride Turbo supports local four-player split-screen, which can also be taken online for a total of eight racers in the stunt parks or any of the race tracks. Online play is always stable, but a few more options would have been nice — for instance, the ability to edit your own series and which items are accessible would have provided a more robust experience. Instead, a roulette between the racer’s selection decides the one and only online race within the lobby, after which it’s dispersed needlessly, starting the matchmaking over again. Thankfully, you can create a private lobby with your pals so the races can keep coming quickly.

So, we don’t have a new Kinect title to wave our arms and body around with. However, that doesn’t stop Microsoft Studios from having a winner on its hands. Joy Ride Turbo doesn’t bring revolutionary controls to the picture, but instead delivers a solid and fun racing experience for all ages by sticking a controller in the mix. With a plethora of hardcore simulation racers available for the console, it’s nice to see a title that appeals to the casual audience, handles well and provides a decent amount of content for the price (800 MSP). It’s a great deal for these nice set of tracks and the large Stunt Park mode all supporting local and online multiplayer.

By Jess Castro
This entry was posted on Monday, May 28th, 2012 at 11:13 am and is filed under Jess Castro, Video Game Reviews. You can follow any responses to this entry through the RSS 2.0 feed. Both comments and pings are currently closed.