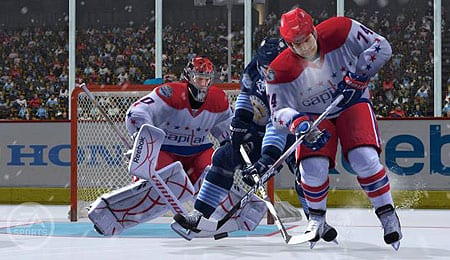 It’s September, and as hockey fans gear up for the upcoming NHL season, an annual tradition is here to help whet the appetite for puck: EA Sports’ NHL series. NHL 12 is here, and for the first time since the outstanding Be A Pro mode was introduced, there’s a new gameplay aspect significant enough to directly affect how you score goals and play defense. Is that enough to make this the best version in the series? Let’s find out.

Most of the controls carry over from NHL 11 — skating, shooting, passing and hitting are all assigned to the same button/stick settings. The biggest change, however, comes with the area in front of the crease. In fact, I’d call these battles for slot positioning a bigger leap forward than the previous addition of real-time physics. While the physics engine affected collisions, a lot of that was tangential to actual gameplay. The new crease encounters factor in an element of hockey that’s been long missing from video games, and the result is a new variable to defence and goal scoring that makes things more unpredictable than ever before.

For offensive players heading towards the slot area, a push on the right analog stick will engage them into a positioning battle. The left analog then controls you as you jockey for position by sliding or spinning off the defender. This will either put you in position to deflect the puck on a shot, be in close for a rebound goal, or screen the goalie so a shot can go through. With this new mechanic, you can be a critical factor in a goal and not even touch the puck. It creates a completely new way to view how you play.

Of course, you can control the defensive side of this as well. Instead of trying to screen the goalie or get in rebound position, the same analog stick controls apply while you try to give your goalie line of site or tie up a crashing forward. In previous NHL versions, this involved a lot of bouncing and bumping off each other. Now, there’s realism as two (or more) players get stuck together while strength and skill factor into positioning.

My only real control gripe with this is that the crease battles are entirely focused on analog stick control. That means if you slip free for a second and push the analog stick in the wrong direction, you could wind up inadvertently running the goalie and getting a goalie interference call.

Sports-game graphics have seemingly reached a plateau this generation. While animation is more lifelike than ever, the actual player faces look like… well, video game representations of players. At some angles, player faces are frighteningly lifelike. At others, they have a strange distortion to them. That’s not a surprise, and really, you only notice the good and bad of that in between plays.

Last year’s iteration of the NHL series introduced physics-based contact rather than checking/falling based on canned animations. With one year of experience under its belt, EA has upgraded this system. Collisions now take size and strength more into account, and physical reactions — stumbling, falling, bumping — now factor this in.

One of the biggest tweaks to NHL 12’s gameplay comes from its dynamic goalie system. There’s more on that later, but from an animation standpoint, goalies have never looked better. Watch the replays and you’ll see netminders scrambling from one side to another, peeking around the screening forward in front, even falling from contact from their own defencemen. Goalie mo-cap has always been top-notch in EA’s series, but this new standard makes it feel more lifelike and authentic than ever before.

The flip side to the dynamic goalie tweaks is that forwards and opposition defence can now engage in battles in front of the crease. While this adds all sorts of gameplay dimensions, from a graphical perspective, it’s a relief to see realistic jostling for position as opposed to the previous animations, which were more based on standard game animation instead of a specific mode for net-presence battles.

EA has finally integrated authentic arena introductions for NHL teams, such as the giant shark head in San Jose. Similarly, the Winter Classic setup (based on last season’s game at Pittsburgh’s Heinz Field) features all of the pomp and circumstance surrounding the NHL’s signature event.

It’s important to note one graphical area that EA has not improved — the front-end menus. It’s become par for the course that EA’s menu system is fairly messy with all sorts of background animation going on, some of which wind up slowing things down. Sometimes, less is more (and there’s more on that below).

From an audio perspective, Gary Thorne and Bill Clement are back, which means that players of previous EA Sports NHL games have heard much of this before. Thorne and Clement have recorded new lines, but there’s definitely an overlap with previous games. Of course, I suppose this is true-to-life — any sports broadcaster taps into his respective library of cliches and catchphrases. The most important thing is that the commentary feels seamless and relevant to the action, so even if you’ve heard some of this before, at least it works.

Thorne, however, does pronounce some player names wrong. Part of this is the fault of the EA team, as mistakes are carried over from previous years. Much of this has to do with lesser-known players who float between the AHL and the NHL, along with younger prospects. Is it too much to ask to have a quality control person review the pronunciation of player names? With several thousand players in the database, perhaps it is.

EA Sports games seem to have a different soundtrack feel for each series, and there won’t be any surprises when you load up NHL 12 — it’s the expected mix of metal and rock, though the addition of prog-rockers ELO and new wave/punker Billy Idol will cause you to do a double-take.

In terms of core on-ice gameplay, the addition of crease battles and dynamic goalies creates several very welcome outside factors into goal-scoring. There’s a greater strategy at play depending on your player’s character strengths. Do you try to back the defenceman into the goalie so he’s caught out of position? Do you try to get off to one side and hope for a deflection? In previous NHL versions, scoring was mostly based on your own passing and shooting. The element of goalie acrobatics and crease battles adds even more calculated chaos in the effort to put the puck on the net. While the execution has its own small flaws, its very presence creates an entirely new dimension to video game hockey and minimizes the “canned goalie movement” factor. That, in itself, is worth the price of admission.

There are noticeable AI tweaks to both offense and defence that help create a better sense of realistic strategy. Players now tend to react based on their own skill sets, so someone like Brian Campbell is more apt to pinch in from the point than, say, Douglas Murray. When gaps open up in the neutral zone, the AI utilizes a little speed burst for skill players to give them the same jump in real life. Player anticipation is better too — dump and chase is now a much more viable strategy based on where players go upon a dump-in.

However, that only addresses what happens between the whistles. Outside of that, EA Sports has brought back and refined all of the previous game modes, creating an immense package with so many forms of gameplay and management that you could win the Stanley Cup five times over and still find a new way to play the game. For the uninitiated, here’s a sampling of the gameplay modes:

All of these modes include the core on-ice gameplay. They’re just different ways of getting there — and in some cases, if you’re more into management than actual gameplay, you can simply simulate the games. The Legends mode is new for NHL 12, and it’s a unique spin-off of the Be A NHL Pro mode, as players such as Chris Chelios and Gordie Howe can play for any team.

Each of these modes will appeal to different gaming styles, from the pick-up-and-go casual sports gamer to the armchair GM. All modes carried over from previous games have been given their own tweaking and revising to add depth — for example, Be A Pro offers more-realistic shift management that prevents you from hogging ice time; you can also skip ahead to your next shift while results are simulated (something that you’ll probably use more often than not).

The laundry list of updates is huge, and too much to simply list here. The easiest way to sum it up is this: all of the modes from NHL 11 are back, and changes range from minor improvements to major depth tweaks. The only real fault someone might find with EA Sports’ changes is that they make the game a bit too complex to just jump into at times.

In fact, my biggest complaint about the game as a whole is that much of the off-ice interactions are menu based. That would be fine except, as I mentioned earlier, the menus are too cluttered and animated, dragging the speed of the whole experience down. There’s really no need for letters and words to swoosh on and off the screen while the background flashes. The animation in itself slows things down, and then when you finally make a decision, the save/load time brings things to a standstill. I don’t know if all of the animation contributes to the slow load times or if they’re put in there to try to mask the load times; either way, they’re one of the few flaws in the entire package.

NHL 12 is almost like a sandbox-style game for the sports genre. The core mechanics have improved to add a level of dynamic surprise, creating a stronger foundation to what was already an impressive game engine. On top of that, NHL 12 can be played in just about any way possible. Straightforward sports game? Pick your team and try to win the Stanley Cup. RPG-esque character creation and leveling? Be A Pro your way to the top. Stats and number crunching for the strategy gamer? The improved GM and Ultimate Team will scratch that itch. In short, NHL 12 is more than the sum of its parts, despite a few technical flaws. It allows you to create a hockey experience in whatever way you want it to be. It’s that good.

By Mike Chen
Tags: NHL
This entry was posted on Wednesday, September 7th, 2011 at 11:00 am and is filed under HOCKEY, Mike Chen, Video Game Reviews. You can follow any responses to this entry through the RSS 2.0 feed. Both comments and pings are currently closed.