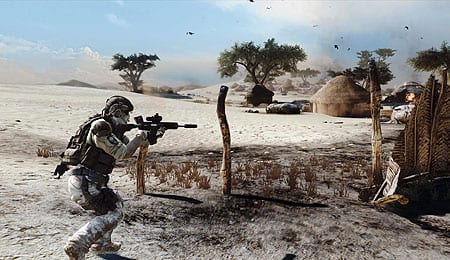 Stealth and patience are key elements in Future Soldier.

Whether you favour Call of Duty, Battlefield, Halo, Gears of War or almost any other big-time shooter on the market, one thing is constant — a frenetic pace designed to keep your palms moist and your nerves frayed via intense campaigns and run-and-gun multiplayer. Contrary to that style is Ubisoft’s newest entrant, Ghost Recon: Future Soldier. This cover-based, third-person shooter slows things down and puts a premium on cautious and intelligent engagement. And it’s damn fun.

While anyone competent in cover-based shooters will be able to dive right in, Future Soldier does have a couple of unique aspects to get used to. First, moving between cover is slickly done by simply viewing another covered vantage point and holding down “A” to sprint there. Popping in and out is crisp, though there are times at the edges when I’d seem to toggle between looking over the cover and around it, which can be frustrating if you’re trying to take aim at something.

Equally important is the ability to mark enemies. Here you simply line up a tango and press the right bumper — when hidden, this targets them for a quiet kill, whereas in firefights it instructs your squad to concentrate fire on that enemy or vehicle. It works great and brings a lot of satisfaction when you can quietly sweep and clear an area. If you target four enemies at once and take them down (known as a Sync Shot) you’ll be rewarded with a temporary slowing of time, allowing you to finish off stragglers before they can raise the alarm. If anything, though, it can be a little too effective in combat as even distant snipers are quickly disposed of with midrange weaponry when marked.

There is a virtual reality aspect throughout Future Soldier that gives it an Assassin’s Creed feel with a hint of Dead Space as holographic rings encircle your weapons and bits of information dot the skyline. It provides a unique look, which combined with the soldiers’ fluid movement and nicely detailed work on their armour and weapons, makes for a strong showing from the core graphical aspects.

Once you venture beyond that, however, things aren’t nearly as impressive. Cut scenes have a messy look that almost makes you wonder if you’re playing the same game — textures are muddy, lip synch is non-existent and there’s just nothing engaging about them. Given how little they offer, whether it be in the area of character or storyline development, you could argue they’re borderline unnecessary. The good news is that these cinematic shortcomings do nothing to dull the action or take away from how impressive the in-game fighting looks.

Despite Future Soldier’s average voice acting and an eminently forgettable soundtrack, Ubisoft manages to hit all the right notes when it comes to the game’s powerful battle effects. A partial (optional) install to your hard drive allows for “enhanced audio” so it’s possible not everyone will hear it the same way I did, but the gunfire and ambient sounds of battle really packed a punch.

Recycled from any number of military games, shows and films, the plot for Ghost Recon: Future Soldier is likely the weakest part of the game. You play as part of a “Ghost” unit that is decked out with the best hardware money can buy and, as such, you draw the most dangerous covert ops. So when another team is killed intercepting weapons of mass destruction, it’s up to you to trace the source of the shipment and bring those responsible to justice.

With stereotypical squad mates and the usual “we must get these guys right now or we’ll never ever get another shot at them” mission briefings there isn’t a lot to sink your teeth into. Instead, the game’s 12 chapters essentially consist of you infiltrating various places (mostly in Russia) and wading through underlings before eventually reaching the top. That such a paper-thin story detracts very little from the single-player mode is a testament to the campaign’s other elements.

At the top of that list is the pacing, which feels a lot more deliberate than other shooters. Most of the missions consist of moving to rally points and eliminating squads of hostiles along the way. Sure, going loud is an option, but it only takes a few rounds to get downed here and enemies aren’t nice enough to advance exclusively from one direction. Instead the focus is on marking targets, watching patrol patterns and putting them down as quietly as possible. There are moments when it feels like alarms are unfairly triggered, but they’re fairly rare. Plus, frequent checkpoints allow you to easily retry a section if things don’t go according to plan.

Where the game stumbles are those few moments toward the end of the campaign when it seems as though the designers forgot what differentiated Future Soldier from the masses. The gameplay doesn’t seem geared toward full-blown firefights, and when they do occur it often makes more sense to simply mark targets and let your fellow super soldiers take them down.

This brings up a notable disconnect found in the campaign — your teammates are treated like actual ghosts by the enemy. For a game that features such lifelike movement of its soldiers and stresses what seem to be more realistic combat tactics — suppressing, moving from cover to cover, advancing slowly — it’s weird to watch an enemy literally bump into a member of your squad and do nothing. From a gameplay perspective it makes sense, and it’d be undeniably frustrating for an A.I. teammate to give away your position, but it still feels wrong.

Those minor issues aside, Ghost Recon: Future Soldier lays out an excellent single-player mode, which also doubles as a teamwork-laden co-op experience with up to three other players. Moving stealthily through heavily occupied zones is a thrill, and the game’s active camouflage system that renders you nearly invisible when crouched is sure to make you feel like a bad ass. There are a handful of solid on-rails segments to spice things up, consisting of both vehicles and a protective “diamond formation” where you move as a unit in the open and cover each other the old-fashioned way, with bullets.

At the end of each level you’ll be scored by how well you performed based on criteria like civilians killed and hit percentage on your rounds. There are also stage-specific challenges for actions, such as clearing an area under a par time, and weapons that unlock additional equipment for future replays. For a shooter, the campaign is pretty meaty, checking in around 10 hours with enough memorable missions and sections to at least warrant a return trip.

Multiplayer is also well represented with co-operative and adversarial modes on offer. Guerrilla is Ghost Recon’s take on “Horde” as you are tasked with surviving 50 waves of enemies. In keeping with the spirit of the game, however, you will alternate between defending and capturing. Survive and you’ll earn wave streaks, which offer up powerful abilities like an airstrike or sentry turret. Two people can play local split-screen or up to four online.

Adversarial revolves around “Conflict” mode, which keeps rolling out new capture and hold points around the map. You’ve certainly seen setups like this before, but the focus on gadgets, teamwork and staying in cover allows it to feel reasonably fresh. There are a handful of other modes as well, including a no-respawn “Siege” setup that feels like a throwback to the original SOCOM games, but odds are Conflict is where most of your online hours will be spent.

Kills, captures and wins rack up experience points, which level up your loadouts and unlock new gear and weapons. Each advanced level brings with it an attachment credit, which are spent in the robust gunsmith mode where you can customize the effectiveness of your gun and tweak virtually every part of your it from side rails to the gas system. It’s a cool addition, and one you can control with the Kinect if you are so inclined, though it seems to work more smoothly with a traditional controller.

While online play does manage a different feel than Call of Duty or other shooters, it’s heavily slanted toward those that can work together. And, as such, I found myself in a lot of lopsided matches where the well coordinated team would rip through the opposition. That’s bound to happen every so often, but the game doesn’t seem to do any auto-balancing, as it will keep the same six-on-six match that just ended with one team scoring 95 per cent of the points. No matter which side you’re on, non-competitive matches aren’t much fun.

Although Ghost Recon: Future Soldier features a solid multiplayer component, it’s the campaign that makes it one of the more enjoyable shooters we’ve played in some time. Anyone who favours tactics over all-out gunplay would do well to add this to their collection.

By Herija Green
This entry was posted on Wednesday, May 30th, 2012 at 10:36 am and is filed under Herija Green, Video Game Reviews. You can follow any responses to this entry through the RSS 2.0 feed. Both comments and pings are currently closed.