MLB Today: It Takes a Ball in the Face to Slow Paul Konerko 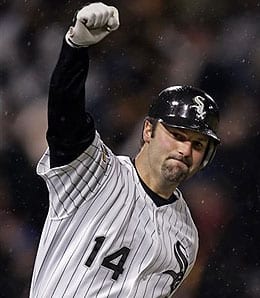 Paul Konerko is the rare creature that seems to be hitting his stride in his mid-30s. He enjoyed a career year in 2010 at the age of 34, when most players are in the downward trajectory.

But no worries… he’d slow down the next season, right? Only partially correct. Konerko put up another .300 campaign, while again topping 30 homers and 100 RBI.

Stranger yet, he’s been even better so far this season, and the only thing that’s slowed Paulie down so far was a Jeff Samardzija fastball to the head on Friday.

Konerko sat the final two games of the Cubs series and the Pale Hose had Monday off. He’s expected back in the lineup Tuesday.

Tough as nails, this Konerko dude. He’s a player that’s slowly but surely starting to put himself into Hall of Fame consideration. Not bad for a guy that looked pretty much done at the age of 32. To call Konerko underappreciated still seems like an understatement.

Now, is he going to maintain a .367 BA (third in majors, second in the AL) all season? Not on your life, especially with his strikeout rate up this year.

But even with the expected regression, he’s well on his way to another stellar season, currently ranking second in the AL in OPS to that Josh Hamilton fellow. Never heard of him, but I guess he’s pretty good.

By RotoRob
This entry was posted on Tuesday, May 22nd, 2012 at 6:22 pm and is filed under BASEBALL, MLB Today, RotoRob. You can follow any responses to this entry through the RSS 2.0 feed. Both comments and pings are currently closed.