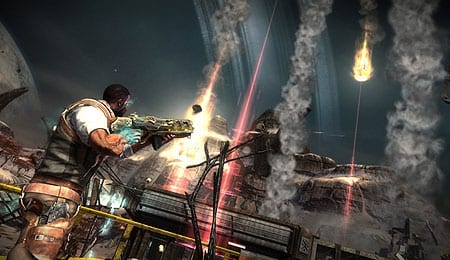 Haven’t we seen this image in every Michael Bay film ever made?

We’ve had our eyes on Starhawk, Sony’s new online-centric third-person shooter, for a while now thanks in no small part to the proposed mix of combat and tactical deployment of buildings and vehicles. As it turns out, the game is more about fast-paced action and, in many ways, feels like a high-budget version of TimeGate Studios’ Section 8 with cooler bells and whistles– and that’s not a bad thing.

There are three distinct methods of travel (and combat): plane, ground vehicle and on foot. Each one has its own unique setup with the core on-foot shooting mechanics taking top honours. Shooting in particular is tight and responsive, which makes for good accuracy when aiming down the sight. The triggers control sprinting (left) and grenade throwing (right), while the face buttons cover jumping, crouching and reloading.

Where Starhawk branches out from other shooters is with the option to call down structures from space — anything from defensive walls and turrets to vehicle depots and launch pads is available provided you’ve harvested enough Rift energy to “purchase” it. It’s fairly slick with the triangle button calling up a radial menu and you making your selections from there.

Ground-based vehicles like jeeps and tanks handle very well. They’re easy to maneuver and aim, and there’s no frustrating fishtailing going on. Unfortunately, the game’s namesake, the Starhawk, isn’t quite as refined. The primary flight controls are solid, but I felt like it was exceedingly difficult to shake A.I. hawks once they got behind you. There are several available tricks, including a missile-confusing chafe, but it never seemed to be enough to capably engage in a dogfight. I also didn’t care for the initial boost when you transform from mech to fighter mode. Cool looking? Yes. But it’s still annoying when it sends you rocketing into an object.

While it may not be a truly eye-popping game, Starhawk looks pretty damn good. The sci-fi Western theme is handled deftly as state-of-the-art structures and vehicles are continually juxtaposed with the desolate worlds where the action takes place. Seeing things rocket down from space and assemble in front of you doesn’t get old, and both aerial and ground combat look smooth. Plus, even with lots going on the frame rate never seems to dip.

There isn’t a lot of personality conveyed by the cast of characters to sink your teeth into, but the voice acting itself is well done. Where the game really shines, though, is with the sounds of battle. Weapons and vehicles have instantly recognizable sounds that provide valuable audio cues in regards to what is going on around you. Add that to some quality tunes and you’ve got a solid audio track.

In contemporary gaming, campaigns tend to take a backseat to multiplayer when it comes to big-budget shooters. There are some notable exceptions — Deus Ex: Human Revolution, BioShock and Singularity spring to mind — but for the most part that’s where the longevity is. LightBox Interactive not only follows that lead, it goes one step further and turns the abbreviated single-player story into a glorified tutorial for the multiplayer, complete with mission-specific structures that ensure you complete the level within the confines of what the game wants you to learn, albeit with some degree of freedom.

The back story is decent enough, reimagining the gold rush in space with frontier towns springing up on distant planets to harvest precious Rift energy. You play as Emmett Graves, a prospector turned gun-for-hire that has been infused with powers from the Rift — powers that have turned other, less resilient folks into claim jumpers known as outcasts. You have been sent back to your home settlement on the planet of Dust to protect a massive shipment of Rift energy from an unusually organized group of outcasts led by the mysterious Outlaw.

Advanced by comic-style cut scenes, the story never really goes anywhere you don’t expect and in the process fails to make Graves a sympathetic protagonist or flesh out the supporting cast. There was potential here to weave a fairly interesting tale, but the setup is left to die on the vine. It isn’t terrible; it just could’ve been more given the setting.

Despite the campaign being geared toward teaching you the game’s signature feature — the build and battle system — it’s generally pretty fun. Dropping buildings from space and scrambling around to take on dozens of outcasts is exhilarating, even if the game holds your hand tactically. The dogfights can be frustrating and a few later chapters overstay their welcome with excessive waves of foes, but the journey, which should take roughly 4-to-5 hours, is worth embarking on at least once.

Clearly, though, Starhawk is about the multiplayer. Despite packing just 10 locations and four modes (Deathmatch, Team Deathmatch, CTF and the Territories-inspired Zones), the game has some serious legs online. Before we get to the good, though, let’s touch on the surprising amount of disconnect from the campaign to multiplayer.

As already noted, the story mode is essentially presented as a lengthy primer for how everything works once you go online. However, once you jump on there you’ll find very little of what you’ve learned will actually translate against real players. For example, the rocket launcher’s lock-on function, which is so effective offline, is brushed aside by pretty much every pilot you’ll encounter in multiplayer. If you fire 20 rockets you might hit one or two hawks, and that’s usually because they were engaged with other flying enemies and got too close to avoid it.

That underscores another point. Traditional player vs. player gun combat was incredibly sparse in my time spent online with most hopping in tanks or hawks and fighting that way. It’s better in the objective-based Zones and CTF, but in a mode like Team Deathmatch you might play a number of rounds without ever firing your rifle so it’s definitely skewing toward vehicles.

All of which means one thing: no matter how much you excelled at the campaign there is going to be a substantial learning curve when you start playing against other people. Experienced pilots will shred you, tanks will drop artillery on you and you’ll see way too much of the pod launch screen. With some time and perseverance, though, the tables will start to turn. Suddenly you’re the one bombing an enemy convoy of tanks and effortlessly rolling away from a half-dozen projectiles. And I am here to tell you: that feels damn good.

Without question, Starhawk is different. This isn’t another Call of Duty or Halo knockoff, and your ability to dominate those games won’t necessarily get you very far here. There is a unique ebb and flow to many matches, made more enjoyable if you can find teammates that want to strategize and coordinate offensive and defensive maneuvers. I played a lot of hours online, and I don’t recall a single match when one person really carried a team to victory.

Beyond competitive multiplayer, the game also offers co-op both online and offline in the form of a survival mode. It’s a wave-based setup you’ve surely seen before, though standing your ground is no easy feat. Fighting is intense, communication is critical and for better or worse you’ll need to readjust the tactics you picked up in both the campaign and adversarial multiplayer.

Slick presentation, good graphics and a meaty multiplayer make Starhawk one of the PlayStation 3’s top online exclusives. The campaign is a bit lean, though, so if you’re not someone that does a lot of social gaming you might want to look elsewhere with your entertainment dollar.

By Herija Green
This entry was posted on Monday, May 21st, 2012 at 1:27 pm and is filed under Herija Green, Video Game Reviews. You can follow any responses to this entry through the RSS 2.0 feed. Responses are currently closed, but you can trackback from your own site.