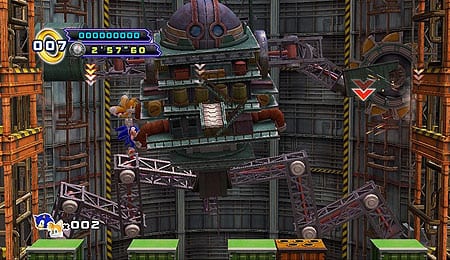 “Why won’t they bring back old-school Sonic games?,” an angry mob of Sonic the Hedgehog enthusiasts groaned after several 3D outings failed to recreate the magic that once captured the hearts of gamers worldwide. Sega attempted to answer the call with Sonic the Hedgehog 4: Episode I, a true 2D throwback set of stages that claimed to be the first real Sonic sequel in over 15 years. But that was in October 2010 and two major releases (Sonic Colors and Sonic Generations) have come and gone. Seemingly set to finish the adventure is Sonic the Hedgehog 4: Episode II, which is available for download on Xbox Live Arcade and PlayStation Network. Was it worth the wait or will Internet message boards continue to speak of tainted childhoods?

Well, you know the drill, gamers — this is Sonic! Run, jump and spin at top speeds to collect golden rings and reach the finish line. Much like the previous installment, the blue blur can also home in on auto-targeted enemies and objects with a simple press of the jump button. And, of course, crouch down and quickly tap the same button for the signature spin dash. This time, though, Sonic isn’t alone as his longtime sidekick Tails comes along for the ride. The “X” button is the key to teaming up for special combo moves. Press it in the air for Tails to carry Sonic to new heights or press it while grounded for a duo dash that can break specific walls and barriers.

Episode I wasn’t too shabby as a return to 2D form after years of 3D titles, but the jumping needed some fine tuning. Thankfully, Episode II made those tweaks as this is the smoothest playing 2D Sonic in a long time. The flow of speed that fans crave is mostly there and the jumping physics are the best they’ve been, which is something the series has struggled with over the past 20 years. Plus, the Sonic/Tails combo moves are defined very well and integrated into the stages in a natural way that doesn’t feel like a gimmick.

However, dismounting from these moves could have used some work. While being carried by Tails, jumping from the grasp as Sonic isn’t the most precise of actions. So when using said moves during boss bottles where rings are scarce, this can result in some clumsy deaths. And as usual, Sonic’s homing attacks will have moments of unreliability, but fewer than Episode I. Overall, however, these are the classic Sonic controls that faithful fans have been clamouring for (unless they’ve been playing the portable titles, that is).

Not only are there tweaks to the controls from Episode I, but also some improvements to the graphics. It’s not that the previous installment didn’t have some flashy visuals — it’s just that its shiny and plastic looking aesthetic wasn’t very fitting of classic Sonic. In this latest outing, the visuals still keep with the times, but they have a better balance of vintage and modern. The textures and models are softer, and the animation nails the look and feel of Sega’s iconic mascot.

The tunes and sounds are kind of a treat as well. They sound like they’re being pumped right from the Sega Genesis circa the Sonic 3 era. But, as nostalgic as they are, the actual compositions aren’t truly memorable amid the large library of Sonic BGM. Plus, as vivid as Episode II looks, it doesn’t have many graphical stand-out moments, especially when compared to last year’s Sonic Generations. Though, to be fair, it’s pretty tough to follow that title in the wow department as far as pure nostalgia and the series’ stage design goes.

It seems that last year’s re-release of the semi-obscure gem, Sonic CD, wasn’t just a love letter to old-school fans. Sega wanted to familiarize gamers with the game’s rival, Metal Sonic, who plays a big part in this new episode as Dr. Eggman’s right hand man… er… robot hedgehog. Since Eggman is fond of teaming up, it’s only natural that Sonic brings Tails to the party, which consists of four zones plus a final boss confrontation — not too different from Episode I. Each zone contains three stages followed by a boss battle, all of which can be played straight through or tackled at your leisure via a world map where you can select stages you’ve cleared freely.

Of course, beating Eggman’s creations and saving the day just isn’t enough. Collect 50 rings at the end of a stage and you’ll get access to one of eight special stages in an effort to snag a coveted Chaos Emerald. This time, in tribute to Sonic II, the stages are in a 3D half-pipe where you’ll need to collect a requested set of rings per checkpoint to win the emerald. These are great fun and much like the original set, they provide a good challenge. Collect all eight emeralds and you’ll gain the ability to transform into Super Sonic, giving you the chance to change your “Try Again” ending into a non-“Try Again” ending (gee, thanks, Sega). Completionists will still fight the good fight nonetheless as well as sniff out every stage’s hidden Red Star.

Okay, so it plays well, there are essentially 15 stages, speed-run leaderboard support and a bonus set of prologue stages where you can play as Metal Sonic if you already own Episode I. What’s not to like? Nothing really; but then again there isn’t really anything to love, either. The stages are fun and flow well and the boss battles actually offer a little bite. Make no mistake — this is a good Sonic game for sure. But there’s very little of this entry that pushes the boundaries of what previous Sonic games have accomplished. Once again, I blame the kinetic and stimulating 2D stages of Sonic Generations and even the freshness of Sonic Colors.

Is it fair to compare this downloadable title to full-fledged retail releases? Considering this one has a US$15 price point and is technically half of a package, we’d say yes, it is. A year and a half has passed since the first installment and the improvements are much appreciated, they’re just not overwhelming. Perhaps we’d be more excited if these improvements passed over to Episode I giving a reason to revisit existing content. Old-school Genesis gamers were able to experience this when Sonic 3 snapped into the Sonic and Knuckles cartridge back in the day. Why not do it now? Oh, and I hadn’t mentioned that this one has multiplayer features where two players can play together as a team. That’s because it’s honestly the game’s weakest add-on. Aside from making the later special stages easier, it’s much smoother experience taking on the quest solo.

Hardcore Sonic fans shouldn’t hesitate to get Sega’s latest (and probably last) installment in the Sonic 4 series. It’s a fun, short-lived adventure that genuinely feels like it picked up from the 16-bit era of speedy hedgehog titles better than Episode I did. However, if you haven’t been wooed back into the blue blur’s world with the latest set of his releases, Episode II is unlikely to change your mind, either.

By Jess Castro
This entry was posted on Wednesday, May 23rd, 2012 at 1:48 pm and is filed under Jess Castro, Video Game Reviews. You can follow any responses to this entry through the RSS 2.0 feed. Responses are currently closed, but you can trackback from your own site.