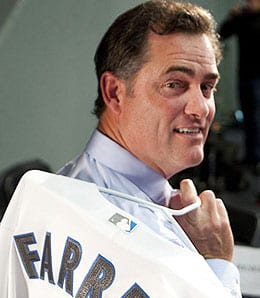 John Farrell has dumped Adam Lind down the batting order.

The Toronto Blue Jays continue to play well lately, but with both the Rays and Orioles rolling, they have now fallen three back of Tampa Bay and two and a half games behind Baltimore in the AL East. On the plus side, the Yanks have been spinning their wheels, allowing Toronto to slide into third place, a half game ahead of New York.

On Monday, Brett Lawrie doubled for the second straight game, but we’re still waiting to see the youngster go on a real tear and start to live up to the lofty expectations. He’s not piling up runs the way he did as a rookie, nor is he being nearly as productive. Lawrie’s BA is down slightly, but nothing to get overly worried about, but the real item that jumps out from his line is the slugging percentage.

After putting up a whopping .580 mark in 150 at-bats last year, Lawrie is only slugging .400 this season. He’s been better with the glove than anticipated and continues to exhibit all-out hustle that makes him a joy to watch, but we’re wondering what happened to that pop he flashed last season.

Are any of you Lawrie owners worried about your boy’s pedestrian slugging through the first few weeks of the season?

By RotoRob
This entry was posted on Thursday, May 10th, 2012 at 6:37 pm and is filed under BASEBALL, MLB Today, RotoRob. You can follow any responses to this entry through the RSS 2.0 feed. Both comments and pings are currently closed.