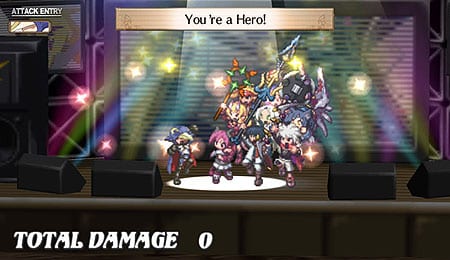 We couldn’t even begin to tell you what the hell is happening here.

The only problem with being a fan of role-playing games is that there just isn’t enough time to enjoy every single one of them. With many quests boasting hundreds of hours of gameplay, it’s inevitable that some series slip through the cracks. Personally, I missed out on the Disgaea series that originally started out on the PlayStation 2. Being a fan of old-school Japanese RPGs, like Chrono Trigger and the Final Fantasy series, and an avid anime viewer as well, it looked like something I could sink my teeth into, but I simply never had the chance. Until now, that is — Nippon Ichi Software has re-released its 2008 PlayStation 3 installment as Disgaea 3: Absence of Detention on Sony’s PlayStation Vita. Now I can finally see what I’ve been missing.

Continuing the series of turn-based role-playing strategy combat, Absence of Detention doesn’t deviate from the successful formula of the genre. Each battle takes place on an isometric playing field where each turn starts with placing your combatants like chess pieces. Execute a series of attacks, magic spells and item usage via menus, then the enemy team takes their turn. The cycle repeats until you drain all of the foe’s health points — resulting in fanfare, victory dances and, most importantly, loot and experience points for leveling up your party. With several classes of characters and enemies, bountiful amounts of weapons and items, and tons of skills and rules to learn, tackling this quest can be intimidating to newcomers. But like any solid RPG, the menu layout and navigation is easy to get around and there’s no shortage of tutorials to get you started.

Usage of the Vita’s touch screen and rear touch panel is also very simple as well. Tapping corners offers quick zoom, holding square while tapping changes perspective and using the bumpers will rotate the camera. All of these function well enough to get the best view of the grid even though the overall feel is loose and could use some tightening. The touch screen can also be used to position your team and select their movement, but this isn’t the most precise method of control. Fortunately, rather than force new touch controls on players just for the sake of demonstrating the portable’s capabilities, the options of Disgaea 3 allow it to handle like a traditional strategy title in every way. That’s not to say that smoother touch-control integration wouldn’t be appreciated in future updates or series installments.

Disgaea 3 is an old-school JRPG and anime fan’s paradise filled with adorable sprite-based characters performing over-the-top magic spells and stylized special attack moves. Seamlessly blending with the 3D environments, every character and creature is seeping with a classic nostalgic vibe while still looking crisp and detailed (I’d avoid the “Soft” visual setting, though, as it makes the characters look washed out and dull). Being mostly a lighthearted comical epic, expect ridiculous and goofy voice samples (in your choice of English or Japanese), hilarious text- and artwork-driven cut scenes and an equally colourful musical score.

Perhaps this title is a little too throwback to truly demonstrate the Vita’s power. Even though the visuals are hitting all the sweet spots for the target audience, there’s no getting around the fact that the general animation during basic combat is very limited and the 3D visuals lack the wow factor of other PS3 ports.

Most RPGs proudly boast a gameplay lifespan of over 100 hours. Disgaea 3 mockingly laughs at your puny 100 hours and brags of over 1 million hours of gameplay. That’s like… I don’t know… a lot of days, right? But really, there is a ton of content in this title. Not only is this a full port of the PS3 title and all its available DLC, but there are new scenarios, new characters and new skills exclusive to this new version. But what does that mean to people like me who missed out on not only this last installment, but the whole series?

It’s simple: If you enjoyed games like Final Fantasy Tactics or Ogre Battle, this is right up your ally. Heck, if you enjoyed any turn-based JRPG ever, this is about as good as it gets. And like most series, previous knowledge of past installments isn’t necessary to enjoy this one. Following the exploits of Mao, the No. 1 honour student at the Evil Academy, your initial quest is to destroy his overlord father, who is responsible for a crushed game console and the loss of hundreds of hours of saved game data. Being the victim of lost saved game data at the hands of others is something I can relate to, so it’s only natural I got sucked into this humorous quest full of exaggerated plot points and ludicrous characters. Honestly, while some gags work better than others, and some are just repetitive, there’s always a decent segue into each upcoming battle without becoming tiresome.

Certainly the addictive combat and endless party customization options don’t hurt, either. On top of your primary story-driven characters, you’ll have nearly 50 different character and monster classes to create from, each with their own set of skills and abilities to learn and master. Prepare your teammates in the Homeroom, a school class where clubs and titles are assigned. Position these alliances on the battlefield correctly and you can perform devastating (and visually impressive) team attacks and skill combinations. Monsters can team up with human partners using “Magichange” in which they transform themselves into powerful weapons. This is just scratching the surface of many of the tactics, strategies and abilities Disgaea 3 has to offer. After all, the level cap for your characters is 9,999.

This isn’t to say that you have to spend your gaming lifetime to fully enjoy the game. Many will be happy enough spending 20-plus hours on the main quest alone and moving on with their lives. But for the nutty completionists that thrive on a life of sub-quests and creating God-like characters, this is pure heaven. Every item in the game can reach unlocked potential in Item World, where conquering a 10-level tiered quest can create powerful equipment assets. The same system also applies to your team members in Class World where you can beef up specific stats through various missions. Considering the amount of characters and items available plus multiple endings and bonus content, there is a ridiculous amount of fun to be had here.

As far as PlayStation Vita titles go, Disgaea 3: Absence of Detention won’t impress technically as it doesn’t fully leverage the portable’s graphical prowess or touch-screen/pad abilities. However, when it comes to classic strategic questing, this game is tops! This title offers nearly endless gameplay and nostalgic JRPG charm. If you’ve played the PS3 version up and down, there may be very little to revisit, but if you missed out or are new to the series, we highly recommend it.

By Jess Castro
This entry was posted on Wednesday, May 9th, 2012 at 10:26 pm and is filed under Jess Castro, Video Game Reviews. You can follow any responses to this entry through the RSS 2.0 feed. Responses are currently closed, but you can trackback from your own site.