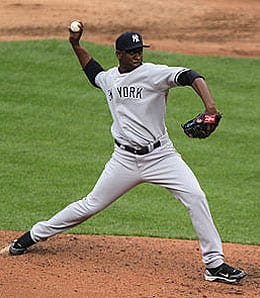 How ironic is it that just a few weeks after we marvelled at how Mariano Rivera has never had a serious injury in his long and illustrious career, he suffers a serious injury? While shagging flyballs. Really?!

The only closer the Yankees have known since John Wetteland was bagging saves for them in 1996 is done for the season, and considering Rivera hinted this was his final season, the immediate reaction was he done, as in rocking chair done.

But no, not to worry… Mo put those fears to rest on Friday when announcing he will be back next season.

But that still leaves us with the question about who will be earning saves in New York this season. Since Rivera’s injury, the Yanks have not had a save chance. The closest came on Friday, when David Robertson was brought in to finish up a 6-2 win, and he blew away the Royals, striking out all three batters he faced. He’s clearly going to get the first shot to do the job, but as Tim discussed in the Wire Troll on Sunday, don’t forget about Rafael Soriano.

By RotoRob
This entry was posted on Monday, May 7th, 2012 at 6:15 pm and is filed under BASEBALL, MLB Today, RotoRob. You can follow any responses to this entry through the RSS 2.0 feed. Both comments and pings are currently closed.