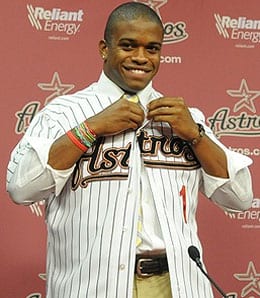 Delino DeShields Jr. could be the leadoff man in Houston one day.

With the season now a few weeks old, it’s time we checked in on the minor leagues to see who’s catching our eye.

A name that has to be familiar to anyone not brand spanking new to the game is Delino DeShields Jr., a second baseman (just like his pop) in the Astro organization.

Houston’s first rounder from 2010 is still over three months shy of his 20th birthday, yet he’s in his third professional season already.

DeShields Jr.’s on-base skills and stolen base prowess were immediately evident in his first taste of the Appalachian League in 2010, but he struggled to a .220 BA in his first try at full-season ball in the Sally last year.

This year, DeShields Jr. is repeating the Sally – with much better results. After going yard (a tie-breaking jack that led Lexington to the win) and scoring two runs with two steals Friday, he’s now hit safely in five straight games. DeShields Jr. is flashing a bit more gap power, but it’s all about speed with him and an 18-for-18 performance on the basepaths through 27 games speaks directly to his chief weapon.

Combine that with much better batting zone judgment this season and you can see that this youngster could be ready for a move to High-A Lancaster of the California League by mid-season.

A line-drive hitter, DeShields Jr. isn’t expected to ever hit for pop, but he’s already packed 35 pounds onto his 5’9” frame since being drafted out of high school, so perhaps he’ll develop modest power – or maybe just a not-sot-modest gut.

No, for this kid, it’s his ability to create chaos on the basepaths that will be his ticket to advancement and has him positioned to be Houston’s potential leadoff man of the future.

The jury is still out here whether DeShields Jr. will be half the player his dad was, but he definitely brings a similar skill set to the table.

By RotoRob
This entry was posted on Saturday, May 5th, 2012 at 12:46 pm and is filed under BASEBALL, Minor Matters, RotoRob. You can follow any responses to this entry through the RSS 2.0 feed. Responses are currently closed, but you can trackback from your own site.