Video Game Review: Back To The Future, Episodes 3 – 5 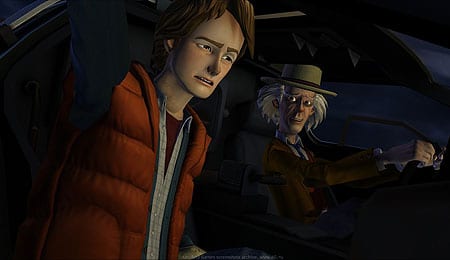 When we last left Marty McFly at the end of Back To The Future: Episode 2, he’d just gotten back to 1986… only it wasn’t the 1986 he recognized. Instead of suburbia, Hill Valley had become a dystopia under the watchful eye of Citizen “Doc” Brown. With three episodes to go, how could Marty restore the timeline he’d suddenly disrupted? More importantly, would the remaining episodes be better than the so-so Episode 2?

All five episodes of Tell Tale’s Back To The Future game are now available across a variety of platforms. For fans that haven’t already purchased the game, now’s a good time to read up on whether or not it’s worth your time, as various package deals have floated around depending on which platform you’re playing.

For better or worse, not too much has changed in terms of gameplay or production since we last checked in with Episode 2. The good (plot, voice acting) is still there, as is the bad (controls), though it’s safe to say that Episode 2 was easily the worst of the series and the tension — and twists — sure picked up from there. Let’s see how the rest of the series fared.

The biggest problem with Back To The Future’s control scheme has been movement. The first two episodes seemed clunkier than other Tell Tale productions, and it almost seems like things have gotten worse over the episodes. The problem here is two-fold: First, areas are seemingly blocked off even though they make no sense, such as one angle allowing Marty to walk on a street but another angle only giving him sidewalk access. Second, the camera angles themselves can be obtuse, obscuring what you need and only intermittently preventing you from running across the screen.

When Marty isn’t actually walking around, things aren’t that bad. Tell Tale’s standard system of using the trigger buttons to cycle through objects on the screen works well to let you know what your options are. It’s a console workaround for the old PC point-n-click system, and while it’s cumbersome, it does manage to get the job done. In most cases, I stood static in the centre of the screen and cycled through the objects/people on screen rather than actually walk to them — it was simply easier to navigate that way.

If you’ve played Episode 1 or Episode 2, you already know what to expect: cartoonish representations of Marty McFly, Doc Brown, and their beloved Hill Valley across different time periods. These graphics aren’t groundbreaking by any means, but they get the job done and certainly create the appropriate vibe for the game. There’s a lack of variety in some of the gameplay environments — much of the action takes place in the same area of Hill Valley, just painted over to represent timeline shifts or changes. Because of that, don’t expect too many visual “wow” moments.

However, what Back To The Future lacks in graphical power or variety, it more than makes up for with its fantastic voice acting. The cast from the first two episodes are back, which means you’ll feel like you’re right there with Doc and Marty as they try to fix the timeline blunders they’ve accidentally created. Semi-spoiler: Episode 5 features a cameo from a prominent trilogy actor, and you’ll have to be pretty darn heartless not to get any warm fuzzies when you hear his voice.

Other audio bits are taken straight from the film trilogy, with the familiar franchise theme played at appropriate times. Similarly, you’ll recognize the sound of the Delorean revving up to 88 mph. It’s all part of the little nuances Tell Tale has implemented to bring the Back To The Future universe into the game environment.

With Episode 2, Back To The Future’s gameplay was both simple and short. For the remaining episodes, the puzzles have ramped up their difficulty, but more in a clever way rather than a frustrating way. As a veteran of adventure games dating back to Sierra’s King’s Quest and Space Quest series, I finally got that “a-ha!” moment in Episode 4 when it really felt like my puzzle-solving cap had to be used.

That doesn’t necessarily mean that the puzzles are that memorable. They’re more mechanisms to advance the plot, and fans of the film series that simply want to enjoy the story might find themselves using Tell Tale’s built-in hint system more often. Other times, you might be wandering around simply trying to figure out what to do (a Goal pop-up can be activated). Part of this confusion stems from NPCs appearing in certain locations after an event — however, their arrival sometimes isn’t obvious, which means you’ll just have to walk around all of the areas to see if anything has changed.

The actual puzzles are standard fare for adventure games: use this object over here, or find out this information to convince that person to do something. Experienced adventure gamers should have no problem blowing through each episode in a few hours; when you put it all together, even fast gamers will get 15-to-20 hours across five episodes.

I got the feeling all along that Tell Tale simplified the game’s puzzles because it knew that this would appeal to a broader audience than, say, Sam & Max. It’s understandable, though it does take away some of the sense of accomplishment that comes with puzzle-solving.

As individual titles, Episodes 3-5 each are better than the previous two episodes, especially when you explore 1986 Hill Valley as a Big Brother society after screwing up the timeline. The Tell Tale team brought in some of the movie trilogy’s original creative staff, and their influence is felt in a story’s effective tone and pace. Despite the ups and downs of the actual game mechanics, the story feels like it fits right in with the movies. In fact, my wife watched the majority of the episodes as I played because the story and voice acting were so effective.

If you’re an adventure gamer who loves the Back To The Future movies (and seriously, you have to be a cold-hearted bastard to not love those movies), this is definitely worth picking up. If you’re simply a fan of the movies, the games are user-friendly enough for you to enjoy. If solving puzzles is too frustrating for you, though, you can still take in the story simply by using the hint system to get past obstacles.

Back To The Future is far from perfect, both from a design and technical standpoint. However, with its fantastic plot and incredible voice acting, it’s far too enjoyable to simply be passed over. Perhaps a better sign of what this game does: immediately after finishing it up, the first thing I wanted to do was pop in my unopened Blu-ray of the Back To The Future trilogy. Tell Tale has done a solid job with this project, though if it comes back for another season, there are plenty of technical and game-design issues that could be addressed to put it on par with the Sam & Max series.

By Mike Chen
This entry was posted on Wednesday, August 3rd, 2011 at 9:42 am and is filed under Mike Chen, Video Game Reviews. You can follow any responses to this entry through the RSS 2.0 feed. You can leave a response, or trackback from your own site.