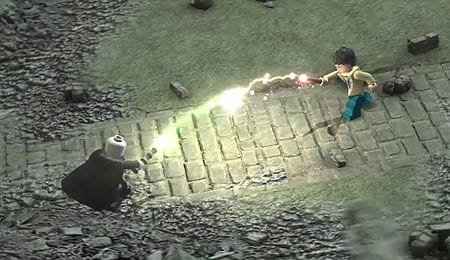 The Boy Who Lived… come to die…

When I was growing up, LEGO was always one of my favourite toys. I loved building ships, destroying them and then building completely different ones. In fact, as I type this, somewhere in my parents’ garage is a plastic trashcan filled with those colourful bricks. As an adult I’ve still gleaned enjoyment from the LEGO video games — specifically the Star Wars series — and was looking forward to seeing LEGO Harry Potter Years 5-7 on my PlayStation Vita. So, without further ado, Expecto Reviewum!

With only a few commands to keep track of here there are actually several redundancies found on the Vita’s setup. Specifically there are three different ways to cycle through your selection of spells: the right analog stick, the left and right bumpers or by touching the spell wheel with your finger. Casting is done with the square; up to three targets can be painted, or you can hold down the button and lock-on with a more powerful version of your spell. You can also jump (X), switch between characters (triangle) and interact with the environment (O).

A handful of touch screen functions are also on offer. Beyond spell toggling you can tap the screen to interact with objects and switch wizards, and there are also times when a hint icon will appear that you can press for more information. The rear touch pad can be used in conjunction with the square button to move the targeting reticle when casting spells. Everything works efficiently, and outside of an inability to manipulate the camera there’s nothing to complain about here.

Few films have been more visually impressive over the past decade-plus than the Harry Potter franchise, and seeing the LEGO equivalent on the Vita is really a lot of fun. Everything is bright and vibrant, and even the darker scenes from the movies have been cheered up for young audiences. The cut scenes do tend to be a little murky looking, though, which doesn’t fit with the rest of the package. Still, the actual gameplay sections are undeniably charming.

All the signature Harry Potter tunes are represented here and help keep the spirit of the film series front and centre. As with all LEGO games (or at least the ones I’ve played) there are no spoken lines as all dialogue is replaced by grunts and other unintelligible noises. It’s a cute gimmick.

As with the movies, Years 5-7 are spaced out over four installments with The Deathly Hallows being split into two parts. Hogwarts doubles as a central hub that allows you to access them and a handful of other activities, such as a dueling club, though they need to be cleared in order before you have free reign to jump around as you please.

Levels are split into chapters, nearly all of which follow the same basic formula of destroying objects to accumulate studs and manipulating LEGOs until you’ve solved enough silly puzzles to advance. Clearly this is a game primarily aimed at children, and as such the difficulty level is nearly non-existent. Enemy encounters are few and far between, and outside of the occasional awkward platforming moment, it’s pretty difficult to actually lose a life.

Should you burst into bits you’ll immediately respawn ad infinitum; once again a concession to the age of many that will be playing. Despite that, LEGO Harry Potter Years 5-7 is still a fun game for adults as well. Beyond just the charm of the LEGO world, the leisurely pace and constant nods to the source material (both films and books) make it a nice low-intensity option — especially on a handheld system like the Vita where abbreviated gaming sessions are common.

Like past LEGO games, every level in Years 5-7 is designed to be revisited multiple times as you unlock new characters that grant entry into previously inaccessible areas. That is just part of the staggering amount of content packed into the game as clearing all four story modes will still leave you hovering around 50 per cent completion. Some of that extra content can be purchased with the studs you’ll be collecting along the way while other stuff must be found in the levels themselves.

There is one significant omission from the console versions, however, as co-operative play has been jettisoned. As anyone who has played any of the half-dozen or so LEGO video games knows, co-op is one of the franchise’s true bright spots. It’s still a fun game without it, though the absence is felt.

LEGO Harry Potter Years 5-7 pretty much holds your hand from beginning to end with spoon-fed puzzle solutions and one-button combat, yet it’s hard not to have a good time, whether you’re facing off with Voldemort in the Ministry of Magic or raiding Gringott’s. The lack of multiplayer is a blow, but this is solid casual fare nonetheless.

By Herija Green
This entry was posted on Tuesday, May 1st, 2012 at 8:50 am and is filed under Herija Green, Video Game Reviews. You can follow any responses to this entry through the RSS 2.0 feed. Both comments and pings are currently closed.