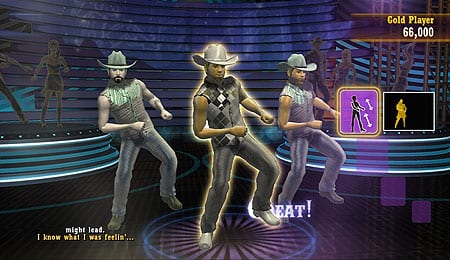 Dust off your cowboy hat, squeeze into your jean skirts and polish those rattlesnake-skin boots — it’s time to get honky-tonk up in this bitch! That’s right, available now for the Kinect is Country Dance All-Stars from GameMill Entertainment. Further expanding the library of dance games on the Xbox 360’s motion-control peripheral is a title with plenty of boot kicking and line-dancing without the harsh liquor or tobacco-chewing of the urban country dance hall. Well, I suppose you could add that to the home experience if you’d like, though personally I like my TV without drunken guests smashing through it and not having my fish tank double as a spittoon.

There are a number of dance games out for the Kinect with the same control scheme, and this one follows that successful fun formula. Each song will have players mirror the dance moves of an on-screen dance posse to the best of their abilities as they’re scored on how accurately they perform the moves. Though its aesthetic is closer to the Dance Central series, the dance gameplay is more similar to the Just Dance games. The choreography flows quickly like a real dance number, which can be overwhelming for first time players, even with the Dance Central style cue cards. They needn’t worry as the judging system isn’t very critical, making even the hardest dance numbers easy to overcome.

On one side, this makes for a great party game experience that any country music fan will easily enjoy. On the other hand, it doesn’t demonstrate the Kinect’s capabilities of recognizing body movement as impressively as other titles.  In most cases, flailing and half-assing the moves will garner the same results as putting in an earnest effort, which takes away incentive from trying harder to learn the real moves. But fun is fun, and Country Dance All-Stars is competent enough to play with the big boys in terms of control. The menu navigation is solid and the two-player modes read both dancers just fine.

She may be able to dance alright, but Country Dance All-Stars sure ain’t pretty. Unfortunately, all of the models and environments look like they were built from last-generation hardware and then upscaled to HD. The clothes on the dancers also have this very bizarre and distracting effect where their textures and patterns are flat and composed incorrectly. It looks like their outfits are simply chroma-keyed out with plaid patterns like a weatherman segment gone wrong.

The sound quality of the tunes is top shelf, for sure, but the tonality and style of dance for some songs just don’t match. Take Johnny Cash’s classic, “Ring of Fire,” for example. The routine for this features a set of sleeveless male dancers snake-slithering like Chippendale dancers, which doesn’t fit the tune at all. There’s a small set of slightly somber hits out of the 33-song setlist that have the same oddity, but for the most part, the mix of pop songs with classic line-dance is fitting. Outdated visuals aside, your enjoyment in the overall presentation depends solely on how much you appreciate modern country music artists such as Tim McGraw, Sugarland and Rascal Flatts.

There aren’t many features to speak of in this boot scootin’ boogie with its four different modes — Normal, Perfection, Freeze and Rehearsal. The Rehearsal mode is a rather weak and watered down practice session where you simply go through the routine without being scored. Since this game’s dance routines free flow as one number instead of being broken down into segments, the ability to tackle the song piece by piece in inaccessible. Perfection mode is simply the same as Normal mode except you’ll only be rewarded points for hitting “Great” moves.

That leaves Freeze as the only unique feature in Country Dance All-Stars. This mode will have randomized moments when the music will stop in which the dancer must freeze their body unless they want their score penalized for the slightest movement. This is a decent mode to give a little competitive twist to your honky-tonk shindig, but this title was built as a dancing fun-time toy with minimum functionality at best.  There are no playlist options, songs offer just one set difficulty and, as described, the modes offer little variety.

That’s not to say it doesn’t deliver what it set out to do — offer a functional dancing game with a 100 per cent country setlist. Song selection is simple enough, load times aren’t too shabby and the routines are elaborate enough to keep you moving. There’s downloadable content support for future tracks and the two-player support keeps with the times. However, the majority of the routines have way too much of a sassy feminine touch to make it a balanced experience for all players, more so than other dance titles. I was able to let loose with Dance Central 2 and Just Dance 3 very easily, but this one felt like I was trying out for a Dallas Cowgirl cheerleader position most of the time. Oh, the shame!

It’s easy. You like dancing to country music? Do yourself a favour and pick up Country Dance All-Stars. It’s not impressive enough to win newcomers to the genre when compared to the big dance franchises, but on its own it’s a fun Kinect title, albeit not a good looking one. A midrange price of US$39.99 makes this 30-plus-song setlist a fair buy.

By Jess Castro
This entry was posted on Thursday, May 3rd, 2012 at 6:55 pm and is filed under Jess Castro, Video Game Reviews. You can follow any responses to this entry through the RSS 2.0 feed. Both comments and pings are currently closed.