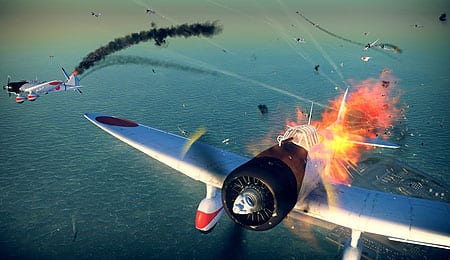 The day was May 25, 2001. It was a quiet morning on a Hawaiian naval base called Pearl Harbor. A beautiful nurse-in-training named Kate Beckinsale was head over heels in love with a young dapper fighter pilot named Ben Affleck. Japanese bombs were dropped. Slow motion explosions ensued. Tears were shed. Refunds were demanded. It truly was a sad day for some to see the infamous event that launched the U.S. into World War II turned into the butt of movie fan jokes. Maybe Konami and Gaijin Entertainment will have better luck in interpreting those historical events with their new WWII air combat game, Birds of Steel.

Birds of Steel features combat flight simulation controls and keeping your plane steady in the air is just as important as firing your guns. There’s a certain mastery to piloting the plane by manipulating the ailerons, rudders and throttle with the analogs. Every aspect of flying the plane is at your control, starting with take-offs, then soaring into dogfights, leading ground assaults and eventually bringing her down for a smooth landing. Your triggers and bumpers operate your weaponry and the face buttons toggle objective maps, viewpoints and assisted target locking. Immersing the gamer further into the pilot’s seat is the ability to get a true pilot POV by pressing in the right trigger while using the d-pad to scope out your environment.

There are three difficulty settings that affect the sensitivity of the controls as opposed to the intensity of the actual battles. When playing in Simplistic mode, you’ll get the easy-to-fly experience where quick moves, spins and turns make for a straightforward arcade-style shooter. Cranking it up to Realistic requires much more finesse and care. Turning incorrectly can easily put you in a top-spin that you’ll have to recover from and damage to the plane becomes a critical factor in keeping your bird in the air. Obviously, Simulation is for the experienced connoisseur of flight where even target locking is disabled, thus calling for bona fide skill. A different set of options also determines whether or not ammunition and fuel are unlimited if you’re feeling ballsy enough.

In any case, the controls are quite smooth and the options will cater to players of any skill set. However, the target audience is the true fans of vintage flight and war history buffs. This doesn’t match the speed and ferocity of a modern shooter like the Ace Combat series, but that’s not the aim here. Birds of Steel delivers a highly satisfying experience to those patient (or previously experienced) enough to master the nuances of realistic flight simulation through plenty of practice. The only downside will be for gamers that find the Realistic and Simulation settings too complex, yet can’t find enough thrills in the aptly titled Simplistic mode.

Birds of Steel boasts over 100 real-life WWII fighter planes, which is outstanding considering the meticulous detail featured in each and every one of them. When flying in the third-person perspective, these models truly impress with realistic textures and lighting. When taking damage, you can even see the bullet holes in very specific areas of the craft. Switching to the cockpit view further demonstrates the development team’s passion for realism as the innards of these war machines are equally magnificent.

Gorgeous landscapes based on true-to-life maps and a somber accompanying score also make for a mostly great presentation, though the detailing in the explosions and weapon effects somewhat pale in comparison to the rest of the game’s visuals. Also, the ground elements such as aircraft carriers, battleships and tanks seem small in scale compared to the planes. I pulled a kamikaze on a ship or two and the damn thing seemed smaller than my plane sometimes.

Given that Birds of Steel was inspired by real campaigns, such as the bombing of Pearl Harbor and battle of Wake Island, you would expect a fair amount of drama. But, to be honest, that is an aspect that is unfortunately lacking here. Playing through “the date which will live in infamy” offers zero emotional heft as does the rest of the historical campaigns. On the flip side, it is appreciated that these tragic times of war were not over-sensationalized; and the collection of film clips and informative narration are certainly excellent.

So, yes, I am disappointed that a thinly veiled love story between a crack shot pilot and a beautiful nurse didn’t make it in this WII-era game. I think I can live without it, though. Birds of Steel has a good bundle of content to make up for the lack of Cuba Gooding, Jr., the potato cook that saved the day. A good place to start will be the tutorial missions, which allow you to get a good grip on the fundamentals — taking-off, flying, weapons training and landing. Then you’ll be ready to tackle the Historical Campaign featuring a total of 20 missions guided by a textbook style account of the real battles of 1941-45. Because of its straightforward approach, it isn’t the most exciting six-hour campaign to play through, but your time is not totally wasted. Experience points are earned that can be used to purchase planes and components for the real attraction — the online modes.

The Dynamic Campaign is where to go for competitive multiplayer gameplay supporting up to 16 fighters. A plethora of options determining ammo, fuel, flight controls and planes are available to set the stage for a territorial battle similar to “king of the hill” modes in other games. Single Mission is a four-player co-op mode where you and your friends work as a team to tackle various mission objectives (the mode can also be played solo with AI bots covering your six). Lastly, there’s the Mission Editor, which is basically a customized version of the Single Mission mode. The only bogus aspect of this one is that you won’t score any XP points to go toward your hanger of customizable planes.

Matchmaking and online gameplay is smooth and functional, but the overall fun factor and replayability are dependent on the gamer’s taste for the genre and fascination with the era. If you’re gung-ho on WWII history and/or love flight sims, this is a must have as it excels in hitting those sweet spots. If you had your fill of Medal of Honor and Call of Duty titles and you had a hard time getting past the first few stages of After Burner, this game will mostly bore you with frustration (or frustrate you with boredom).

Not everyone will appreciate the craft and attention to detail that Birds of Steel is packing. It takes patience and practice to truly master the game’s simulation controls if for those not already experienced in the genre, so it may turn off the casual crowd. However, fans of flight and old war nostalgia are rewarded as Gaijin Entertainment has treated them with enough single-player and multiplayer content to last for a good while. These birds are ready to fly on Xbox 360 and PlayStation 3 for the modest price of US$39.99.

By Jess Castro
This entry was posted on Saturday, April 14th, 2012 at 9:38 am and is filed under Jess Castro, Video Game Reviews. You can follow any responses to this entry through the RSS 2.0 feed. Both comments and pings are currently closed.