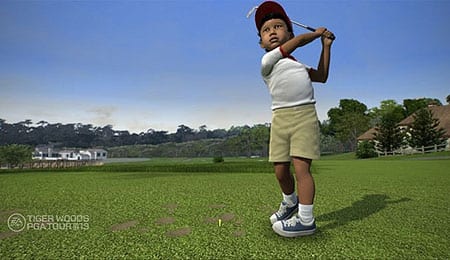 This screenshot is likely the only time you’ll think about Tiger Legacy mode.

Ah, analog control — how EA loves to integrate you into this generation’s sports games. Slowly but surely, sports games have moved towards minimal button interaction, moving past the digital on/off buttons for control schemes that have the flexible feel of true sports. Tiger Woods PGA Tour 13 is EA Sports’ dip into this philosophy for the golf genre, and its revised swing mechanic is probably the biggest draw for this year’s release. Is it enough to warrant a new purchase? Let’s take a look.

Note: This score does not factor in Move or Kinect support. As this was reviewed on a PS3, Move support is discussed at the end of the review.

Golf game controls tend to focus on just a few very specific things — swing timing/power, placement, and club selection. For the previous two, EA has given players greater control over the variables. Swing speed, stance, backswing arc — all of these details that golfers both pro and amateur take into account when they hit the links. The left analog is now the focal point for your swing, determining the complexity of your swing, giving you all sorts of options to compensate for wind, add spin, or chipping. Once you finish your swing, a small HUD update lets you know how successful your shot was.

This new control scheme replaces some of the old button/stick work, and as EA (and sports games in general) try to consolidate control into a fluid analog motion, this is probably the biggest evolution in control in a while. It does take time getting used to, just like EA’s Grand Slam Tennis 2 new racket control system. Once you get the hang of it, though, it’s a fun and innovative new way to enjoy the golf sim genre.

There’s room for improvement and nuance, of course, but that’s par for the course (har har) when EA implements a new control scheme. Expect next year’s iteration to take this as a foundation and improve as it moves forward.

By now, there are no real surprises when it comes to the audio and graphical quality of an EA Sports release. Tiger Woods 13 is no different — the environments are strong and vibrant with meticulous details poking through at different angles. One thing that golf has going for it over, say, hockey, is that the animations can focus mostly on the player and his/her immediate environment. There aren’t teams of multiple players on each side, each in the middle of unique animations with realistic facial details. Because of that, EA’s background and environment work stand out — particularly the light and shadow.

From an audio perspective… well, it’s a golf game. It sounds like golf. Golf clubs, golf balls, golf audiences, golf claps. It’s all sampled and propagated mostly from previously existing EA Sports assets, with the usual process of baselining audio commentary from earlier games but with new lines thrown in.

Tiger Woods 13 excels at the core game of simply playing virtual golf. The refined control scheme improves the experience as any time controls become more accurate and fluid in sports iterations, it’s always a bonus, and you’ll find that putting no longer feels like hitting a golf ball with a hockey stick. EA Sports seems to have tuned in the analog feel to get the nuances right. Of course, just like in real golf, you’ll have fits of “There is no way I hit it that hard,” but isn’t that half the fun of golf?

The current sports gaming model focuses on earning customizations and playing online. For the former, Tiger Woods 13 introduces coins. If it sounds like virtual currency, it is; coins can be used to ultimately buy tweaks and bonuses that are both visual and game boosts. Coin collecting is at the forefront of the game, and it’s a bit of a catch-22, particularly if you’re playing competitively online. You’ll do the sports equivalent of level grinding to earn coins, which gets old soon, but you’ll want those coins to compete with other players that have those boosts. The other trick, though, is to use real currency and just buy the virtual add-ons. Either way, you’re out time or money. The former may not be an issue if you like playing tourney after tourney, but it does feel a bit like a tacked-on idea that a corporate accountant spawned.

Single player game modes come in fairly standard sports-game options: instant matches, career modes, tournaments, playing The Masters. EA did throw in a new wrinkle that is ripe for mockery, though, with Tiger Legacy. The purpose of it is to take l’il Tiger from doing trick shots as a wee youngster to major career records and milestones.

I’ll pause while you make the requisite joke about Tiger’s interest in the ladies. And no, there is no simulation of any of this — it ain’t God Of War.

The problem with this mode is that it’s very limited in scope. As a means to earn coins, it does its job. For anyone who’s not an obssessive Tiger Woods fan — or doesn’t think that l’il Tiger’s trick shots are cute — it’s a waste of disc space, something that could have been replaced with more robust challenges or game options. Someone out there probably likes it a lot, but there won’t be too many people like that.

Online modes are fairly standard with multiplayer tournaments and competition, though a new Country Club option lets you belong to an online team of sorts. There’s internal leaderboard competition with clubs, but there’s also a sense of team as the club works towards a specific goal.

Your decision to purchase Tiger Woods 13 probably depends on whether the updated control scheme and upgraded Move/new Kinect support mean a lot to you. It’s a solid game on its own, but not exactly a giant all-around leap forward — and since golf isn’t a team sport where you need roster updates from an offseason of trades and free agency, you could probably keep playing last year’s version and not notice too much of a difference.

However, if you’ve stayed away from the series for a while, Tiger Woods 13 is certainly a solid, well-crafted package. If you need a golf game in your library, you can’t go wrong with this. If you’ve already got one, hedge your bets — at least until they add God Of War-style babes to Tiger Legacy mode.

Since the Playstation Move has been introduced to sports games, it’s been very hit and miss. In some cases, it’s a thrown-in gimmick, and in other cases, there is thoughtful integration with varying degrees of success. The good news for Tiger Woods 13 is that it feels like a real golf swing, which is great fun. The bad news is that it’s still not 100 per cent, and you’ll find yourself unable to achieve the nuance you want with the standard controller. If you’re willing to sacrifice that precision for the fun of swinging your virtual club, you’ll find that Move response has been upgraded since last year.

By Mike Chen
This entry was posted on Thursday, April 12th, 2012 at 8:10 am and is filed under Mike Chen, Video Game Reviews. You can follow any responses to this entry through the RSS 2.0 feed. Both comments and pings are currently closed.