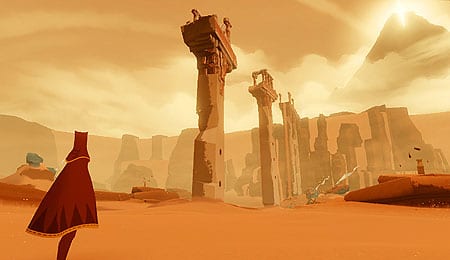 In action, Journey’s graphics rank among the best on PSN or XBLA.

If you view the PlayStation 3 and Xbox 360 competition as a console war, then the battle between the PlayStation Network and Xbox Live Arcade has been Sony’s Waterloo. As good as Castle Crashers was, the fact that it won Sony’s Gamers’ Choice Award for top PSN game in 2010 when it hit XBLA two years earlier was a pretty clear indicator where the two services stood. Given their respective histories, it’s surprising then that the frontrunner for top downloadable game this year is a PlayStation Network exclusive; thatgamecompany’s Journey.

Layouts don’t get much simpler with one button to jump (X) and another to emit a tone (O) — tap it for a soft sound and hold it down for a much louder one. You can maneuver the camera with the right analog stick or by rotating the SixAxis controller itself. Outside of some isolated moments where it’s a little tough to judge distance, when ascending you shouldn’t have any trouble here.

More than anything other factor, Journey is made special by how seamlessly the visual and audio elements work together from start to finish. Within the first moments of the game you trudge up a sand dune toward a couple of tombstone-esque objects, and when you the reach the vista you see the huge amount of distance between where you are and where you need to get. That sense of scale and desolation sets the tone for the rest of the game.

Your character, cloaked and armless with spindly legs, simultaneously carries a look of both helplessness and determination as it sets about its quest. You’ll explore sprawling sand dunes, massive underground ruins and snowy mountains on your trip, all of which are wondrous in their own way. The music rises and falls throughout, hitting all the right notes whether it wants to evoke sadness, discovery, whimsy or desperation. As cliché as it may sound; you don’t play Journey, you experience it.

Strip away the spectacle of the presentation and Journey can be explained in fewer than 10 words: you are here; you need to get there. A series of cut scenes show your beady-eyed traveler encountering larger, apparition-like versions of its species, and an animated set of hieroglyphics helps establish when progress has been made. Beyond that, however, there’s no story to speak of.

Each section contains a primary glyph that must be reached. To do that you’ll need to do some light platforming and puzzle solving. Areas also contain secondary glyphs that extend the length of a cloth scarf you’re wearing. Power drains from the scarf each time you spring into the air so as your scarf gets longer you can jump higher and glide further. Once the power drains it can be recharged by getting close to pieces of fabric.

With that representing almost the entirety of the gameplay in Journey it’s fair to say there’s not much depth. The game is also light on challenge with only a couple of semi-dangerous enemies to be found. If you’re someone that needs to be pushed by cerebral puzzles and/or tough foes to enjoy a game then you’ll probably want to take a pass.

One of the more ingenious elements at work here is the integration of online multiplayer. Anything but traditional, Journey allows you to randomly encounter a second traveler. Who that person is remains a mystery until the closing credits as there is no voice chat and no PSN name appears above their head. Communication is limited to using the game’s series of tones. It’s not always clear what the other person wants, but their presence in such a barren world is legitimately soothing.

On one of my playthroughs I had the same companion for roughly 20-to-30 minutes. Then when we reached the darkened underground passage he knelt down and faded to dust (having quit the game). It was striking how lonely the world suddenly felt, and how excited I was when a new traveler arrived to take his place. As someone that tends to favour competitive online multiplayer, this turned out to be one of the best cooperative experiences I’ve had in years.

As unique and memorable as Journey is, you cannot gloss over its brevity (figure around two hours your first time through) or lack of challenge. For US$15 you’re getting a package that’s rich in ambiance and emotion, yet short on content.

For years now PlayStation 3 owners have been forced to look enviously at scores of XBLA exclusives and titles that would be available months (or years) later on PSN. Today, though, it’s the 360 owners that should be jealous. Journey is a phenomenal experience that will leave an indelible mark on your gaming psyche.

By Herija Green
This entry was posted on Wednesday, April 11th, 2012 at 8:16 am and is filed under Herija Green, Video Game Reviews. You can follow any responses to this entry through the RSS 2.0 feed. Responses are currently closed, but you can trackback from your own site.