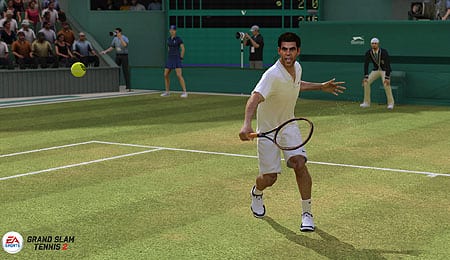 Was there really a need for a new tennis video game? Top Spin 4 seemed to have the market cornered on deep simulation-style play, while Virtua Tennis 4 went for the arcade angle. Now, the EA Sports juggernaut has stepped into the match with Grand Slam Tennis 2 (the original Grand Slam Tennis was a cartoonified game for the Wii), and it’s brought its biggest weapon along. No, not the John McEnroe license, but the control scheme that’s come to define this generation of EA Sports games — right analog control.

Forehands, backhands, slices, top spins, drop shots, and more — can EA get all of this into a few flicks of the right analog? Let’s take a look to see if it’s aced it or double-faulted.

Let’s get this out of the way: EA Sports has made the move to right analog control for the racket and there’s a bit of a learning curve. For fans of Top Spin and Virtua Tennis, you’re going to have to fight your intuition to use the face buttons (though they are available as a control option). Work with it, and you’ll find the analog racket control to be as rewarding as the one used in EA Sports’ NHL series.

The right analog controls power, shot type, and direction. That seems like a lot for a series of flicks, but some detailed tutorials (and optional HUD overlays) help you get the timing right. The basic setup is this: pull the analog stick back or at an angle to determine your shot type and power (the direction is for shot selection, the depth is for power). Time the release or push forward to determine shot direction.

A big part of this is timing; there’s some leeway in there, along with optional HUD guides but your initial hour or two will be frustrating as you adjust to the new control scheme. Serving works in the same way, though a more detailed HUD overlay gives you a timing graph to illustrate power and accuracy based on the peak of the ball toss.

Some buttons do come into play as shot modifiers, but by and large the entire game can be played simply using the analog sticks. As for actual movement, the trusty analog stick gets you around the court, and it feels like EA Sports tried to go for a happy medium between Virtua Tennis 4 and Top Spin 4. Top Spin’s detailed animation cycles made movement a bit clunky while Virtua Tennis featured more of an arcade feel. Grand Slam Tennis 2 offers crisp player movement without feeling like you’re floating out there — it’s grounded in reality without being a slave to canned animations, though it does seem strange that players move as quickly in the first set as they do in the last.

EA Sports games are known for their visual attention-to-detail, and Grand Slam Tennis 2 is no different. The character models for famous players past and present look better here than in other current-gen tennis competitors. When you look at, say, Novak Djokovic or Maria Sharapova, it looks like them more so than in other games, and perhaps that’s just because EA Sports is EA Sports — bigger budgets, more resources. Character animations are smooth and realistic; the transition from a ready position to stretching out for a shot is fluid.

The arenas are all extremely detailed, and you’ll get access to all four Grand Slam tournaments. EA Sports managed to license Wimbledon, making it the exclusive game of England’s Grand Slam tournament. Outside of that, avid tennis fans will notice the nooks and crannies of Arthur Ashe Stadium and the other majors.

During gameplay, the wide shots look nearly as good as the real thing. A big part of that is EA’s lighting engine, which brings a significant authenticity to the shadows and sunlight of matches. Little details, such as the kick of dust on clay and grass courts, help bring the graphics to life.

EA Sports has a big license deal with ESPN, so it only makes sense that it brought in ESPN’s tennis crew, highlighted by colour commentator John McEnroe (who also guides you through the tutorials). Each successive year tends to build on the EA catalog of commentator dialog, so perhaps that’s why Grand Slam Tennis 2 feels repetitive pretty quickly. You can always turn it off, though, and just be left with the sounds of the court.

Once you master the new right-analog control, how does the game play? Options are pretty familiar to any EA Sports veteran: instant matches, career modes, and online play are all there, along with classic matches in historic venues.

When you get in the game, you’ll get down to the nitty gritty of actually, you know, playing tennis. If you’ve played other tennis games, then you’ll know the drill of what you should do to win points. However, there does seem to be an emphasis on net play in order to really bust through; those that like to baseline an opponent a la Andre Agassi will find rallies lasting forever. The by-product here is one area that EA Sports failed to adapt: fatigue.

Top Spin 4 allowed you to really grind opponents down from the baseline because it incorporated fatigue into performance. That doesn’t come into play here, which means it’s more important to hit winners at the net rather than use strategic rally play. That’s fine if you want to serve-and-volley, but if you prefer a groundstroke approach to rallies, it’s only going to prolong the inevitable.

This even factors in when you play as or against pro players. While each player comes statistically ranked on certain traits, the truth is you’re not going to get that much variation in style whether you’re playing a current player like Rafael Nadal or a legend player like Pete Sampras. (Wait, Sampras played serve-and-volley and never tired… so maybe that one is accurate.) The actual roster is also somewhat limited, though it does have a mix of men’s and women’s players from the ’70s through today. I’m not quite sure how EA dictated who was on the list, but I’m guessing it was more about license availability than anything else.

For those that enjoy building their own virtual career, they’ll find that uneven challenges await them. The quality of AI competition doesn’t gradually ramp up, so you’ll whip through the first and second season with relatively little difficulty, then you’ll hit a brick wall. Perhaps the game’s developers figured that it would take you about two seasons to really get a handle on the new control system, and there is a certain logic to that. However, even into your third and fourth season, most people will feel comfortable but not necessarily masters of the controls. I consider this to be a good thing, since there’s a lot of variation and nuance in play, and subtle differences in analog angles and depth can mean the difference between finesse and brute force — just like in real tennis.

Grand Slam Tennis 2 comes with its share of warts, but as a current-gen debut, it certainly lives up to the hype. Its innovative control scheme paves the way for future tennis games, and I’d be very curious to see what happens in the next iteration of Top Spin. However, this slick package is only a solid foundation to build a franchise from — it’s far from polished.

Of course, EA Sports is all about annual iterations. Tennis fans should check out this year’s Grand Slam Tennis simply to experience the controls, even if it’s just a demo download. Next year, though, expect EA to refine its system while addressing the flaws that came with its first step into centre court.

Note: This was reviewed on the XBox 360, so unlike Top Spin 4 and Virtua Tennis 4, I had no way to evaluate the Move controls.

By Mike Chen
Tags: Video Game Review
This entry was posted on Tuesday, February 28th, 2012 at 6:42 pm and is filed under Mike Chen, Video Game Reviews. You can follow any responses to this entry through the RSS 2.0 feed. Both comments and pings are currently closed.