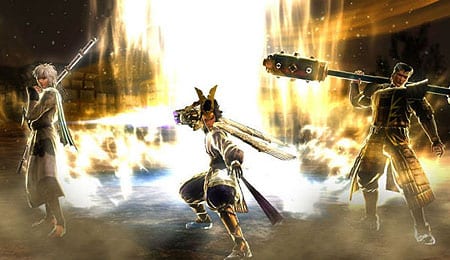 Strike a pose, there’s nothing to it. Vogue!

If you think having characters from Dynasty Warriors and Samurai Warriors come together in a single title is crazy, then prepare to enter a world of insanity. In fact, this time we even have a few special guests from other games being added to the mix. That’s the very premise of Warriors Orochi 3, which is available now on the PlayStation 3 as well as the Xbox 360. Will the number of heroes in developer Omega Force’s latest development be enough to increase its fan base? Or is just too much too handle?

The variety of enhancements incorporated into the combat system works hand in hand with the familiar control scheme of a hack ‘n slash title. By pressing the right shoulder button, you’ll release an attack powerful enough to knock out the surrounding enemies. This is the function that fans of the series have come to love. However, in this title there is also a slight variation: Either trigger button will switch amongst three of your chosen characters. Pressing both triggers simultaneously will perform what’s called a “True Union Arts,” which is an attack involving all three characters. The traditional button layout coupled with additional special commands makes Warriors Orochi 3 an excellent and straightforward title to play.

The colour scheme for the various areas in the game appears vibrant and attractive in the forefront, but upon closer examination the textures looks like they could use some sprucing up. The characters have a pleasant and welcoming appearance, and the attack effects are like fireworks on the battlefield. Unfortunately, it’s this amount of detail that causes the frame rate to drop quite noticeably at times.

The sound effects behind Warriors Orochi 3 play out quite effectively when listening to all the sword clashes. In addition, the soundtrack creates an uplifting and exhilarating impression, which is vital when getting players involved in a combat setting. The tunes incorporate instrumental scores that include guitars and fast-paced electronic effects, thereby helping to evoke a sense of chaos.

Heroes from both Dynasty Warriors and Samurai Warriors have been brought into a new world on account of the demon, Orochi. Everyone is about to be eliminated by a hydra when Kyuga, who has the ability to travel through time, steps in to rescue the three generals and guides them to the past in hopes of altering their future for the better.

Warriors Orochi 3’s hack ‘n slash fest will have players facing and slaughtering an army of opponents, all in an effort to conquer a territory. With over 120 characters available, Warriors Orochi 3 is considered to have the biggest roster in any series to date. Included in the lineup are well-known figures from other games including Ninja Gaiden, Dead or Alive, Bladestorm, Zill O’ll and Warriors of Troy. There are also other originally-designed characters from Asian mythology including Ne Zha and Shuten-doji.

Besides battles, players will need to form alliances with other characters, unravel potential missions during interactions and figure out ways to create new weapons. On that note, you can merge special attributes such as special elemental damage and offensive attack to end up with more powerful weapons. This gives an added layer of complexity to the gameplay.

Warriors Orochi 3 rewards players for their efforts and provides them with incentive to explore the whole story as well as complete side missions. During the game, some of your characters could die during missions, rendering them unplayable. However, the side missions give you a chance to get them back when you enter a battle from the past. Once you complete all the side missions, a “Redux” version is available where you’re presented with new objectives involving saving a character’s life.

Realizing how mainstream games like LittleBigPlanet and ModNation Racers are allowing players to generate their own content, Omega Force has decided to get in on the fun. In Warriors Orochi 3, there’s a “Musou Battlefield” mode where players can now create their own stages and share them online. Specifically, players can modify a battle from the single-player mode in regard to the characters that are to be included in the battle, the types of soldiers occupying the area and even the dialogue. It’s a fun addition that keeps this game fresh and allows players to take part in the creativity.

Warriors Orochi 3 definitely packs a lot of content with the available amount of playable characters. Plus, for each crossover title included in this game, there’s a corresponding battlefield. So you get a variety of environments to immerse yourself in. An online feature included in this game adds even more replay value while allowing gamers worldwide to appreciate the familiar gameplay and control scheme on a continuous basis. While it’s true that the experience can become repetitive over time, fans will still find the mindless hacking and slashing to be a blast.

While Warriors Orochi 3 may not win the hearts of all gamers, it should be considered a worthy buy for fans. It’s overflowing with mindless action, adrenaline-pumping tracks and ambitious characters waiting to get in on the massacre. And for the guys, the idea of using a female character from Dead or Alive in a Dynasty Warriors type of setting should be titillating (no pun intended).

By Uma Smith
This entry was posted on Monday, April 9th, 2012 at 11:45 am and is filed under Uma Smith, Video Game Reviews. You can follow any responses to this entry through the RSS 2.0 feed. Both comments and pings are currently closed.