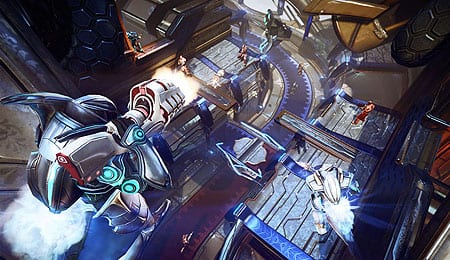 Pro tip: when you get a chance to call in a jetpack in Nexuiz you DO IT!

While I was attending one of THQ’s media play sessions for Nexuiz (pronounced “Nexus”) last week, the PR rep asked what my impression of the game was. I offered a one-word reply: fast. Indeed, the third leg of Microsoft’s House Party brings with it a frenzied pace not seen from a first-person console shooter in years — Call of Duty on a budget it ain’t.

With gameplay that moves so quickly, it’s not surprising that the controls are very simple. Each of the game’s nine weapons has a primary (right trigger) and secondary (left) fire mode, and there are three buttons dedicated to shuffling between them.  You can also crouch, jump and melee your opponents, though hand-to-hand feels more like luck at these speeds. Selecting the game’s signature mutators is done quickly with the d-pad. Of special note is the game’s incredibly fun jetpack controls, which allow you to climb, descend and hover with ease.

Built on the CryEngine 3 that supported Crysis 2’s excellent graphics, Nexuiz is a really good looking game that has solid environmental variety and keeps up with the breakneck pace. The nine maps present a mix of outdoor mountainous regions and futuristic cityscapes, all of which are fairly small and cleverly designed to continuously bring teams together in firefights. Character models are bland, though, offering you just three purely cosmetic choices (light, medium, heavy) and no opportunity to customize your appearance further.

Background music is a diverse and, dare I say, eclectic mix with maps featuring unique tunes that range from upbeat to fairly mellow. Sound effects are solid while the obligatory robotic-sounding announcer is eminently forgettable.

Two races — the Kavussari (orange) and Forsellians (blue) — were at war for a very long time, and even now that they’ve formed a tenuous peace they still meet each other on the battlefield in made-for-TV combat. That’s the back story for Nexuiz, which is told through a brief opening video. After that the only exposition you’ll be getting is a few lines of text that appear on the loading screen related to the map you’re about to play.

That doesn’t matter in the slightest, though, since developer Illfonic doesn’t bother with a story mode of any kind. This is a game built entirely for online multiplier. Yes, there is single-player “Bot Training” where you fight against A.I. opponents, but stat tracking and progression doesn’t exist here. So unless you relish destroying overmatched computer-controlled foes the only purpose it serves is to get you accustomed to the speed of the game and the layout of the maps.

And there’s that word again: speed. Gamers that have spent the last several years playing the likes of Halo, Call of Duty and Battlefield will find Nexuiz to be something of a culture shock. Instead of slowly sweeping through buildings and checking corners, you’re sprinting around maps, picking up shields and weapons, and launching through the air while firing round after round at your opponents. This is stick-and-move gameplay where the kills and deaths pile up in short order.

Speed alone isn’t enough to sell the experience, however, which is where the game’s trump card comes into play with “mutators.” Found at various points on the maps as well as earned by in-game accomplishments, mutators alter gameplay on the fly. There are dozens upon dozens of them that fall into several categories — they can benefit your squad, hinder your opponents (the one that inverts controls is particularly nasty), alter rules, grant items, and even do a healthy number of completely absurd things like having the developers float around the map and shoot lasers out of their eyes.

A choice of three mutators pops up at random when you gain one. As you play, though, you’ll earn points that can be used to purchase “pips.” You can have up to 100 of them and are able to assign them (up to 10 per) on the mutators you like to use the most. The more pips you have on a mutator the more likely it is to come up.

Nexuiz comes packed with nine battlegrounds. Of those nine maps, six are designated as Team Deathmatch locales while the other three are for Capture the Flag. Those are the only two modes available, which may be underwhelming or refreshingly streamlined depending on who you ask. Given the price point (800 MS Points) and play style I’m glad they stuck with a pair of modes that fit comfortably within those constraints rather than trying to pound a square peg into a round hole in an effort to provide more options.

What is sure to derail anyone’s good time, however, is lag. Playing in the media sessions I experienced a couple of dropped connections when the game attempted to migrate the host unsuccessfully. I also ran into an issue where I could hear the game being played but was stuck looking at the loading screen, which required me to exit to the dashboard. When it’s running as intended it’s a lot of fun. When it isn’t it becomes an exercise in frustration.

On top of that you have to have 6-to-8 people to start a match, and once it begins players are not allowed to join. In-game auto balancing is also missing so even if one team loses half its forces you’re left with 4-on-2 instead of 3-on-3. The developers indicated it’s something they’re looking to address “soon” so let’s hope that gets sorted out because lopsided doesn’t play here.

Nexuiz is a fun and frantic shooter that feels decidedly different than most current shooters. As such, it is worth the 800-point asking price for FPS fans. Bear in mind that it does come with a pair of major caveats in that it’s entirely dependent on smooth connections as well as an active online community.

By Herija Green
This entry was posted on Tuesday, February 28th, 2012 at 12:13 pm and is filed under Herija Green, Video Game Reviews. You can follow any responses to this entry through the RSS 2.0 feed. You can leave a response, or trackback from your own site.