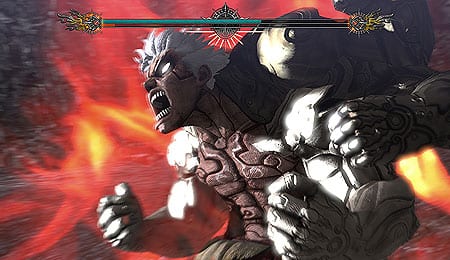 After playing through the hack n’ slash fest, Bayonetta, in 2010, I felt there was a new bar set in over-the-top action sequences in video games. Pardon the potential spoiler, but when I punched the final boss into the friggin’ sun, I wasn’t sure what would top that on my “Ridiculous Shit-O-Meter.” Ah, but of course, leave it to Capcom to answer the call. Along with developer CyberConnect2, their new game for Xbox 360 and PlayStation 3 is insane — in a very good way. Prepare yourself for Asura’s Wrath!

Containing a blend of hack n’ slash/brawler, 3D shooter and quick-time events, Asura’s Wrath has a fresh control scheme that stands in a class of its own. In its first chapter, the six-armed demigod Asura throttles toward Earth’s atmosphere through an armada of creatures, decimating them with ferocious punches. Aiming with a reticule, holding “X” launches rapid punches as if firing a Gatling gun while auto-locking multiple targets and firing missile-like attacks is done with the “Y” button. Pressing the right bumper during movement will perform a quick evade.

Before you get comfortable with these Panzer Dragoon-esque controls, Asura is put into ground combat using light attacks, heavy attacks, jumps and counters assigned to the face buttons. Amidst brief skirmishes and epic boss battles that utilize a mixture of both control schemes, the key is to charge up the “burst” bar by keeping aggressive and dishing out damage. When fully charged, pressing the right trigger will unleash his wrath and a series of quick-time events using the face buttons and both analog sticks will see the fight through.

These controls shine in translating the speed and brutality of the narrative effortlessly into the player’s hands. Every earth-shattering punch and narrow evade is immensely satisfying throughout the game, even though I made a realization in the early chapters: it’s a lot easier than it looks. Admittedly, Asura’s Wrath lacks complexity and depth when compared to other action titles such as Bayonetta. When in basic combat situations, there’s a certain level of repetition to be endured before the amazing boss encounters, and it heavily relies on the player’s investment in the storyline. So if the tale of vengeance amongst gods doesn’t latch onto you, Asura’s simplicity may lack the satisfying bite of lengthy move lists found in the God of War, Devil May Cry or Ninja Gaiden titles.

Capcom has taken the art and graphic style seen in its Street Fighter IV series and turned the volume up. Way up. The lightning-fast camera movements, heavy character detail and massive special effects are explosive. The mind-blowing soundtrack and intense voice acting (in your choice of English or Japanese) is top notch. This is a sweeping mini-epic filled with rich characters and menacing villains that gets the quality treatment it deserves.

It’s crystal clear that the presentation of Asura’s Wrath is aiming for the heart strings of all anime fans alike. For example, when I first saw the mid-chapter bumpers that are commonly used in a series as a commercial break, I shed a single tear of joy. This could be a negative for non-fans though. Muscle-bound anti-heroes screaming in rage and causing catastrophic damage is just one of the many anime clichés found here, and if you’re the type to hatefully pigeonhole all anime into being like Dragon Ball Z, I can tell you with confidence to simply walk away.

So, why is Asura so pissed off? Where does his wrath come from? Well, when you’re framed for the murder of an emperor of demigods, your wife gets executed for “treason,” your daughter is kidnapped to have her energy siphoned against her will, and you’re tossed into Hell for about 12,000 years, you tend to resent those that did it to you. Thus begins this puree of Hindu mythology, over-the-top fisticuffs and sci-fi adventure serials. It’s a mighty fine set of 18 stages, each one acting like an episode of a great TV show. I’m talking about the addictive kind that you can’t stop watching and end up running an all-day marathon on Netflix, leaving you exhausted in Cheeto-fingered glory.

The pacing of Asura’s Wrath creates anticipation for each upcoming chapter not only by having excellent (albeit, derivative) narrative but by springing surprises in its gameplay to match the scenario. After fighting a small horde of Gohma (impure creatures of evil), you’ll be firing at an armada of heavenly spaceships set to purify you and bomb you to Hell. Next, you’ll go toe-to-toe with a giant whose finger is the size of a continent. Later, you’ll drop commands to drink hot sake with beautiful maidens before getting stabbed by a blade that pierces the other side of the planet. What I’m trying to say here is that there’s never a dull moment. And also that it’s historically accurate and very true to life. Right?

However, as mentioned earlier, it’s easier than it sounds. From a pessimistic point of view, the gameplay is overly simplistic and repetitive, consisting of watching story exposition, tapping out one-button attacks, evading when necessary, hitting some QTEs, watching more exposition, then rinsing and repeating. If you sat through any of Metal Gear Solid’s hour-long dialogue sequences and thought, “Do I get to play an actual game, yet?!” or scoffed at Heavy Rain’s interactive movie formula, there’s a safe bet that this game will piss you off. This will be especially true when you realize that missing most QTEs have zero consequence other than diluting your overall score.

On the other hand, the flow becomes quick after the first three chapters, there’s consistent motivated integration with the cut scenes and the overall gameplay is just so goddamn visceral. It is a wild ride that won me over with its style even though deep down, I wanted a little more substance. I’m won over enough to press on through playing the hard difficulty, achieving higher rankings and unlocking bonus stages that unveil the true ending. And with some potential DLC on the way, I can see this game parked in my console for some time despite its relative brevity.

Capcom and CyberConnect2 get 2012 rolling early with a bona fide hit. Asura’s Wrath has innovative style and presentation, making this is a must-have for action fans that like meat in their story. If it had a longer running time, and the controls were as intensive as the narrative, this would have been a near perfect title.

By Jess Castro
Tags: Video Game Review
This entry was posted on Wednesday, February 29th, 2012 at 2:22 pm and is filed under Jess Castro, Video Game Reviews. You can follow any responses to this entry through the RSS 2.0 feed. Both comments and pings are currently closed.