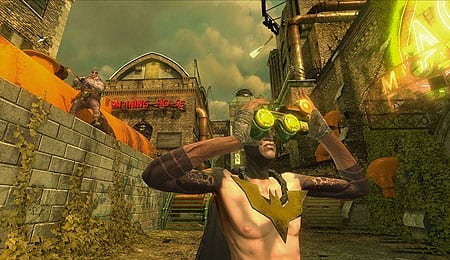 Yeah, this guy really took the advice about theatricality a bit literally.

It’s safe to say that Batman has been getting the royal treatment outside the comic book arena these past few years. Between an excellent reboot film franchise and a stellar set of triple-A games, the level of grit and sophistication that Caped Crusader fans demand has been met. With that said, any game featuring the famous black and yellow insignia will have some added pressure to deliver the goods. Therein lies the challenge for Monolith’s new title, Gotham City Impostors. Not only does it have to stand up to Batman’s standards, it’ll also have to compete against the wide array of first-person shooters as well.

For unexplained reasons, Bats is away, so Gotham’s gun-toting vigilantes come out to play, thus transforming the Dark Knight’s stomping ground into an online multiplayer FPS arena. Gotham City Impostors doesn’t aim to fully revolutionize the popular genre, but there are definitely some fresh surprises here. Expect a familiar control layout with triggers and bumpers for weapon fire and item usage, and face buttons for jumping, reloading and toggle crouch. Diversity from the rest of the pack comes in the secondary gadget controls. Before heading into battle you’ll be able to outfit yourself with one of several assist tools. Most of these wonderful toys are used for expanded movement such as grappling hooks, spring shoes or gliding capes. Others work to benefit the team such as trap sets and targeting goggles that help spot the enemy through walls.

Targeting and shooting is pretty tight and easy to pick up as any FPS should be nowadays. The functionality of secondary weapons such as pipe bombs, axes and boomerangs offer enough diversity to prevent this title from being passed off as a Call of Duty clone. I did find a few quirks in some of the assist items. For example, the grappling hook doesn’t pull you over ledges even when you’re in hands reach. Also, to speed up with the skates, you need to push in the left stick as you move, which is awkward and uncomfortable. But as a whole this is solid shooter action, and mastering the techniques and usage of items to your liking adds fresh perspective to a flooded genre.

Sitting somewhere between the “BAM!” and “ZONK!” of the popular ’60s TV show and the foul-mouthed hyper-violent culture of today’s modern gaming is the tonality of Gotham City Impostors. The bright and vibrant stages take place during the day, which alone is big change in direction from what we’ve seen lately in Gotham. The customizable character attributes are hilariously makeshift with cardboard masks, poorly sewn costumes and ridiculous body paint. How about adjustable pitch shifting to give your team member comical high or low voices? Yeah, the silliness is pretty much off the charts.

On the other hand, this wackiness is juxtaposed with bleeped out obscenities, intense firearms and an overall dilapidated vibe that reflects the filthy criminal underbelly of Gotham that we all know and love. The sights and sounds of this bizarre mixture of camp and edge never deliver a dull moment. However, when compared to the pitch-perfect presentations of Arkham Asylum and Arkham City, these impostors don’t stand a chance. If you’re looking for an expansion of Rocksteady’s interpretation of DC’s darkest city, you may be disappointed.

As eloquently stated by the Joker in The Dark Knight, Batman never kills criminals due to a “misplaced sense of self-righteousness,” and the Joker won’t kill Bats because he’s “just too much fun.” Gotham City Impostors ditches the long running complexity of this rivalry and replaces it with shotgun shells and fanboy ownage speak. Up to 12 players are pitted in a battle of brutal street justice between overzealous Batman fans and insane Joker disciples. With three modes of gameplay, which are variants of the classic “Deathmatch,” “Capture the Flag” and “King of the Hill” formulas, hopping into the fray is simple for anyone who has played an FPS in the past decade.

Team Deathmatch mode is the most basic and speaks for itself. In Fumigation mode, teams fight for control over three toxic gas devices scattered across the map; the team that dominates the territories releases toxins on the opposing team for win points. Psyche Warfare has teams fighting over a battery that powers a mind-control device that leaves the enemy in a sissy-slap fighting daze, scoring a team point. This is competent FPS action for sure, but it probably won’t pull the most diehard Call of Duty or Battlefield players away from their favourites. However, for those looking for a new source of multiplayer shooter addiction, these six-on-six match-ups definitely fit the bill.

Easily the best aspect of Gotham City Impostors is the character customization, which goes beyond simple cosmetic changes and adds to building a good team dynamic. Your character shape, which can range from a thin frame to a bulky mass, actually affects your speed, power and vitality. After getting your feet wet with some matches, you’ll be able to further customize your crime fighter/agent of chaos with unlockable weapons, gadgets and attribute perks.

When assembling your team in the lobby, good communication can lead to balanced squads where players take on specific duties in a fashion slightly similar to Team Fortress 2. For example, having the goggles equipped instead of a grappling hook will lessen your own mobility, but your team will have an upper hand as you can spot and target your enemies through walls — or perhaps having medic abilities to revive fallen teammates can even the odds faster than a respawn. The possibilities are vast as none of the body types is restricted to certain weapons or gadgets. You can build your team member as you see fit as long as you keep earning the experience points.

Leveling up is generous as you’ll earn XP for just about any of your efforts. Matchmaking in lobbies is decently fair, but it can be problematic once the matches start. There is no auto-balancing when a team of two is unfairly pitted against a team of six due to a drop out. Aside from that, online play is smooth and lobby creation is quick and easy. Offline players should take note that there are no modes for a split-screen experience and there isn’t a single-player campaign apart from a tutorial and a decent Challenge mode. These challenges definitely deliver some bite when trying to score gold medals and are welcome components to the package.

Even though it’s only loosely tied into the Batman universe, Monolith’s Gotham City Impostors is a solid first-person shooter with its own personality and style that I found to be a good breather from the rest of the pack. Just be aware that it doesn’t offer much single-player content, and its long-term viability is solely based on how active the online community is. However, based on announcements of future free DLC, there’s potential to keep the streets of Gotham lit with gunfire.

By Jess Castro
This entry was posted on Tuesday, February 21st, 2012 at 12:28 pm and is filed under Jess Castro, Video Game Reviews. You can follow any responses to this entry through the RSS 2.0 feed. Both comments and pings are currently closed.