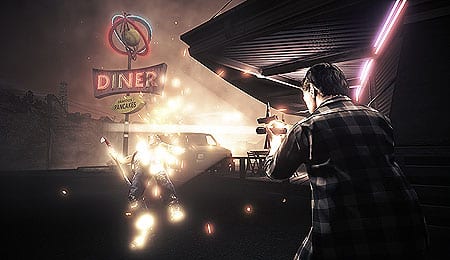 Come for the gun play, stay for the pancakes.

It’s not often that retail games spawn downloadable sequels, but such is the case with this week’s House Party title, Alan Wake’s American Nightmare. Thankfully for fans of the original, developer Remedy Entertainment handles the transition deftly while simultaneously moving this installment in a more combat-focused direction.

If you played the original, the controls and combat mechanics in American Nightmare will be instantly familiar. Holding down the left trigger focuses your flashlight’s beam and aims down your weapon’s sight, eradicating the shroud of darkness that acts as a shield to your enemies (known as the “Taken”) and making them vulnerable to gunfire. You cycle through your available weapons with the d-pad, reload with “X” and pop in fresh batteries with “Y” — all of which works well.

Where the game stumbles is with dodging and shooting “from the hip.” Dodging is pulled off with the left bumper (which also enables sprinting) and if timed correctly you’ll duck away from a blow in slow motion. Sounds simple, right? Unfortunately, the timing feels very inconsistent, and since the punishment for a mistimed attempt is taking a pounding, it’s best reserved as a last resort (as opposed to a regular part of your defensive repertoire).

Firing from the hip presents its own problems. As you’d expect you’re not nearly as accurate this way, but the introduction of a new enemy type that splits when you shine a light on it requires that you shoot it without holding down the left trigger. Although it’s not a major issue, the over-the-shoulder perspective does make accuracy somewhat dicey.

Usually graphical praise for an Xbox Live Arcade title comes with the qualifier, “for a downloadable game.” However, American Nightmare doesn’t need one. Remedy has done an excellent job of creating retail-quality visuals in a relatively modest-sized download. The game swaps out the dense woods of the Pacific Northwest for the fictitious city of Night Springs, located in the Arizona desert. All the locations look good and create a creepy vibe, however, in a concession to the downloadable market’s limitations there are only three areas to visit.

Character models are first rate, and there are a number of small live-action sequences throughout the story that do a lot to give the sinister Mr. Scratch some juice. There’s also more enemy diversity here than in the original, though the action-heavy focus makes them less menacing.

The soundtrack is exceptionally strong with music that does a great job of setting the mood for whatever is happening. It’s particularly enjoyable when songs swell in volume to accompany enemy onslaughts. Voice acting is hit or miss. The person handling Alan Wake (and Scratch) carries that aspect while two of the three secondary characters seem out of their depth in serious roles.

Although familiarity with the original Alan Wake isn’t required to play (or enjoy) American Nightmare, the plot may not make a lot of sense without it. The spinoff is set after the events of the first game (and the two DLC episodes) and follows Alan’s continuing efforts to escape the darkness and return to his wife, Alice. It’s definitely not as rich or interesting a tale, but it does feature a more identifiable antagonist in Alan’s evil doppelganger, Mr. Scratch.

Primarily portrayed via a series of live-action cut scenes viewed by turning on the TVs found throughout the game, Scratch is effectively brought to life. There’s more than a little bit of Heath Ledger’s brilliant work as the Joker being channeled here as Scratch oozes with sociopathic malice, taunting Wake at every turn and effectively putting a face on your enemy.

Speaking of enemies, several new types of Taken have been added to liven up the action. Among the more interesting additions are ones that can transform into a flock of ravens to get the drop on you or flee when you’ve got the upper hand. There’s also one that divides in two every time you shine the light on them. Fought alone none of them are overwhelming, but when the games starts mixing, it can get a little tricky.

As noted there are only three locations in American Nightmare, though the storyline dictates you return to each of them multiple times during the approximately six-hour campaign. Each visit changes things up a bit as goals are added, enemies grow stronger and new manuscript pages are available to find. These pages fill several roles, including fleshing out the story, though their main purpose is to encourage exploration since many of the game’s best weapons are locked away in cases that can only be opened if you find the required number of pages.

Weapon variety is more diverse to accommodate the shift toward action as the standard pistols and pump-action shotguns have been supplemented with things like nailguns, SMGs, assault rifles and even a wickedly effective sawed-off shotty. Your flashlight recharges quickly as well, making batteries much less essential. Also, each level contains multiple ammo boxes that will refill both primary guns (it doesn’t replenish the flair gun) and your battery count. You’re not a writer in over his head anymore; you’re a “Champion of Light,” hardened by your battles with the darkness, and your increased competency in combat reflects that.

That level of armament does come with a price, however, and that’s the undeniable loss of tension during the story. Gone are the moments where lumberjacks appear from nowhere and the prudent action is to sprint for the safety of the light. Even in the game’s most intense battles, it’s rarely necessary to do much evading as long as your aim is decent and you can effectively track the Taken as they try to surround you.

In addition to the campaign there’s also an arcade mode entitled “Fight Till Dawn.” Here you’re challenged to survive for 10 minutes against waves of Taken while racking up the highest score possible. You build your multiplier with each kill or successful dodge — a tricky proposition given the aforementioned timing issues — and it resets any time you’re struck. Scattered around each location is ammo and lights that heal your injuries. Weapon cases are also present, and they’re unlocked the same way as they are in the campaign (another reason to find those pages).

There are five locations in all, though you’ll need to earn stars to unlock them; anyone that’s played Spec Ops in MW2 or MW3 knows the system. Earn enough and you’ll gain access to Nightmare versions of the maps, which change things around and increase the difficulty. Whatever thrills were missing from the story are here in force. The combat gets intense in short order and you’ll find yourself trying to fend off a half-dozen enemies or more simultaneously. It’s more challenging than anything in the campaign and the 10-minute run time makes it an inviting bite-sized chunk to return to.

If Alan Wake was Alien, American Nightmare is Aliens — lighter on story and ambiance yet still entertaining thanks to a solid plot and satisfying action. It may not be the true sequel fans of the original wanted, but it’s a hell of a consolation prize.

By HC Green
Tags: Video Game Review
This entry was posted on Thursday, February 23rd, 2012 at 12:33 pm and is filed under Herija Green, Video Game Reviews. You can follow any responses to this entry through the RSS 2.0 feed. Both comments and pings are currently closed.