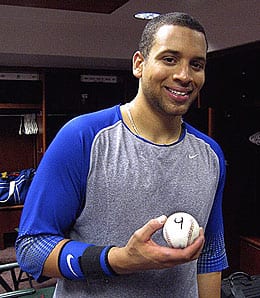 James Loney was overjoyed to land on our coveted NL All-Wire Team.

Now that I’ve finally been activated from my stint on the DL (for yet again busting my wrist), it’s time to conclude our review of the waiver wire gems that led so many of us to the promised land in 2011 and give the Senior Circuit its due accolades. Without further ado, here are your 2011 National League Wire Troll All Stars.

Wilson Ramos, Washington Nationals: Ramos was acquired from the Twins in a 2010 deadline deal for Matt Capps and very quickly demonstrated his “top prospect” status. In 389 at-bats this season, he smacked 15 homers with 52 RBI and a solid .267 BA while showing improving extra-base pop with 37 XBHs. Do you think that the Twins are experiencing a little seller’s regret over this move?

James Loney, Los Angeles Dodgers: Loney was toiling through a rather pedestrian year, even by his standards, but he caught fire in mid-August. For those that took the plunge over the final six weeks he provided you with seven homers, 28 RBI and an amazing .388 BA. Who could have seen that one coming? Will it be enough to save Loney from being non-tendered by the Dodgers? Time will tell.

Michael Morse, Washington Nationals: Eight weeks into the season, Morse was owned in 14 per cent of CBS leagues. But then the shoulder injury to Adam LaRoche opened the door for more PT and the promise we saw when Morse slammed 15 homers in 266 at-bats in 2010 was fulfilled. He finished the year tied for ninth in the NL in homers with 31, 10th in RBI with 95, and his 910 OPS was eighth, behind only such studs as Ryan Braun, Matt Kemp, Prince Fielder and Joey Votto.

Daniel Murphy, New York Mets: Murphy was enjoying a strong season until blowing out his knee August 7 against the Braves. In 394 at-bats, he managed to hit six homers with 49 RBI and an exceptionally strong .320 BA. If he could only find a way to stay healthy. Perhaps a move to third would help? A shocking as it sounds, there’s talk the Mets are considering shifting David Wright to the outfield to open up the hot corner for Murphy.

Eric Young, Jr., Colorado Rockies: You can’t steal first, but Young did demonstrate he knew what to do when he got there by swiping 27-for-31 bags in only 198 at-bats.

Ryan Roberts, Arizona Diamondbacks: Remember when the D-Backs were going with a job share at the hot corner with Melvin Mora and Geoff Blum? Roberts was a long shot to break camp with the parent club in the spring and responded by simply playing himself into the job. The 19 homers, 65 RBI and 18 thefts in 482 at-bats were huge for those that gambled early.

Dee Gordon, Los Angeles Dodgers: The trade of Rafael Furcal to the Cardinals opened the door for regular playing time for Gordon. He languished with a shoulder injury for most of August, but bounced back with a great September. Over the final month, Gordon scored 21 runs with 12 thefts and an amazing .372 BA in 113 at-bats batting in the leadoff slot. Is a 50-theft season in the works for the speedster in 2012?

Emilio Bonifacio, Florida Marlins: Bonifacio proved to be the 2011 version of Chone Figgins circa 2005. He qualified at second, shortstop, third, and in the outfield and, moved into the leadoff role vacated by the ineffective Chris Coghlan, Bonifacio scored 78 runs with 40 thefts and a great .296 BA. He’s a candidate to man the hot corner in Florida next season.

Alex Presley, Pittsburgh Pirates: Presley got the call at the end of June and responded in fine form with four homers, 20 RBI, 27 runs scored and nine thefts in 215 at-bats. An outfield composed of Presley, Jose Tabata, and Andrew McCutchen bodes well for fans in the Steel City in 2012.

Lucas Duda, New York Mets: The injury to Ike Davis opened the door and Duda proved to be a very capable replacement, enjoying a fine rookie season. In August, he smacked five homers and drove in 20 runs while attempting to solidify his claim to the right field gig for the Mets next season.

J.D. Martinez, Houston Astros: When the ‘Stros moved their Double-A squad to Minute Maid Park in mid-summer, Martinez was part of that transition. The five-homer, 28-RBI August bodes well for the 24-year-old heading into 2012.

Cameron Maybin, San Diego Padres: When was the last time we saw a 40-40 player in San Diego? Okay, so it was stolen bases and RBI but nonetheless, Maybin provided the offensively challenged Padres cause for celebration. I find it hard to believe that he is still just 24 years old. Sometimes top prospects just take some time to develop, but it’s always better late than never, and in Maybin’s case, he sure looks like he’s arrived.

John Mayberry, Jr., Philadelphia Phillies: In a part-time role, Mayberry mashed nine homers with 23 RBI and a great .301 BA over the last two months of the 2011 season, making him one of the most pleasant surprises for the Phillies. The recent news that Domonic Brown is likely to spend more time at Triple-A in 2012 makes Mayberry a very intriguing option next spring.

Joe Saunders, Arizona Diamondbacks: Saunders’ fastball can’t break a pane of glass as evidenced by just 108 strikeouts in 212 IP, but his three wins and 3.15 ERA in six September starts turned out to be huge for both the D-Backs and many Fantasy squads’ fortunes.

Cory Luebke, San Diego Padres: Luebke only managed to win five games after being inserted into the rotation at the end of June but posted a solid 3.32 ERA, 1.09 WHIP, and 111 strikeouts in 100 2/3 IP. The 26-year-old southpaw has found his way onto my late-round pitching list for 2012.

Jeff Karstens, Pittsburgh Pirates: Karstens was instrumental in the Pirates’ first half resurgence in 2011. His five wins in seven starts from mid-June to mid-July helped the Pirates stay within reach of the NL Central lead before the team imploded. Expect Karstens to hold down a rotation spot in Steel City again next year.

Ryan Vogelsong, San Francisco Giants: In 2011, Vogelson finally found the strike zone after toiling in Japan and the minors for the bulk of his career. He hit the ground running and simply didn’t stop. Along the way he tied Tim Lincecum and Madison Bumgarner for the team lead in wins with 13 and, in 179 2/3 IP, posted a superb 2.71 ERA with 139 strikeouts. Not too shabby for a dude that had 10 career wins in six seasons heading into the campaign. Some believe Vogelsong deserved the NL Comeback Player of the Year Award, but don’t you have to be coming back from something to be considered for that honour?

Josh Collmenter, Arizona Diamondbacks: Over the top is an understatement when discussing Collmenter. His unique delivery, superb control (27 walks in 140 1/3 IP) and devastating cutting/rising fastball baffled NL bats after he moved into the rotation in mid-May. Two D-Back starters that were huge surprises? Any wonder why they ran away with the NL West?

Javier Vazquez, Florida Marlins: A horrible first three months of the 2011 campaign mysteriously turned around for Vazquez in July. He was arguably the best pitcher in baseball down the stretch with six wins in his last six starts, proving once again that as an NL pitcher, he’s the man; as an AL hurler? Um… not so much. In 45 IP over those final half-dozen starts, Vazquez struck out 42 while allowing only three earned runs. Those that saw this one coming probably also owned James Loney, and we salute your powers of observation… or at least your dumb luck.

Vance Worley, Philadelphia Phillies: Worley got out of the gate quickly filling in for the injured Joe Blanton and in a loaded Philly rotation provided unexpected depth and was another of the pleasant surprises for the Phils this year. In 21 starts, the 24-year-old righty posted a stellar 11-3 record with 119 strikeouts and a great 3.01 ERA.

Kyle Lohse, St. Louis Cardinals: Four wins and a 1.64 ERA in April were largely responsible for a career year from the one-time Twin. Repeatable? Probably not, especially in watching him get slapped around in the postseason. But those that jumped on the Lohse bandwagon early reaped some large rewards.

Mark Melancon, Houston Astros: Part of the booty Houston received when it dealt Lance Berkman to the Yanks, Melancon took over as the team’s closer for Brandon Lyon at the beginning of May and on a very poor Astro squad he racked up eight wins and 20 saves with a great 2.78 ERA. In 10 1/3 IP in September, he allowed just three hits and no earned runs with 13 strikeouts and four saves. Closers on bad teams can generate good save totals as those teams very rarely win games that don’t include save chances.

Javy Guerra, Los Angeles Dodgers: Guerra was recalled from Double-A Chattanooga mid-May, saved his first game and slid very quickly into the closer role in Dodgertown. He ended up going 21-for-23 in save chances while posting an outstanding 2.31 ERA. Oh, and the fact that Dodgers have a new Latino star doesn’t hurt their cause given that a large percentage of their fan base is the same heritage.

Fernando Salas, St. Louis Cardinals: Salas stepped into the closer role after the demise of Ryan Franklin and, in 75 IP, he struck out a batter per inning with 24 saves and a stellar 2.28 ERA. Tony LaRussa finally discovered he had Jason Motte in his pen and stripped Salas of his job in favour of the saves-by-committee approach in September leaving Salas’ status as a closer up in the air for 2012.

By Tim McLeod
This entry was posted on Friday, October 14th, 2011 at 12:06 pm and is filed under BASEBALL, The Wire Troll, Tim McLeod. You can follow any responses to this entry through the RSS 2.0 feed. You can skip to the end and leave a response. Pinging is currently not allowed.