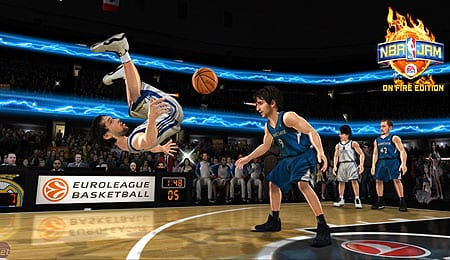 ]In late 2010, EA Sports re-launched the NBA Jam franchise on the Wii, followed shortly thereafter by ports to the Xbox 360 and PlayStation 3. The game was good but took some lumps for its hefty price tag and lack of online support for the Wii. This time around, EA slashed the price to 1,200 MS Points (US$15) and went through the digital download market with NBA Jam: On Fire Edition for Xbox Live Arcade and PlayStation Network.

Built specifically for the 360 and PS3 — as opposed to the previous version that was ported over from the Wii — the controls in this iteration of NBA Jam are top notch. Everything from swipes and shoves to blocks and alley-oops are easy to execute. CPU-controlled teammates follow commands well and do a respectable job of defending and attacking the basket. There are instances when moves feel slightly delayed, but it’s a minor issue.

It’s hard not to embrace the blend of cartoon bodies and photo-realistic heads that give the game its distinctive look. Animations are excellent and keep up the frenetic pace without a hitch. In classic NBA Jam fashion there are plenty of over-the-top dunks along with newly added “razzle dazzle” shots and dribble moves that beg for good-natured trash talk. And while the soundtrack is unremarkable, the commentary is always good for a few chuckles.

First released back in 1993, the NBA Jam franchise has undergone few changes to its original gameplay over the years. For some series a lack of innovation can be the kiss of death, but for a legitimate trend-setting game like Jam any significant alterations would be both unwarranted and unwelcome. As such, anyone that’s played a previous incarnation of the series should feel immediately at home with the unique brand of basketball being played.

That’s not to say advancements haven’t been made, however, as the gameplay has received a number of refinements to elevate the core experience. Perhaps the most noticeable change for longtime fans is in the alley-oop game. Now connecting with a soaring teammate is no longer a virtual two-point lock as oops will be swatted and would-be dunkers regularly shoved to the ground if you try to simply bully your way with lobs down the lane.

It’s a welcome tweak that helps keep another innovation from dominating the game. That would be “team fire,” which is activated when you connect on three consecutive alley-oops without the opposing squad netting a basket. This grants both members of your team unlimited turbo, and unlike traditional fire it isn’t extinguished by your opponent merely scoring. Instead it lasts a set amount of time and can only be short-circuited by an alley-oop executed against you.

NBA Jam: On Fire Edition also allows for both traditional locked single-player games — where you control one player and the computer controls the other — and Tag Mode, which allows you to switch between them freely. As someone that played a nearly incalculable amount of NBA Jam growing up I stuck with the old school method, but it’s still nice to have options.

If there’s one area this can be viewed as a step back from the 2010 version it’s in the secondary game modes as the Remix tour has been 86ed. In its place is a beefed up single-player experience called Road Trip, which sends you to every NBA city on the map to square off in three tiered challenges (bronze, silver and gold) against all 30 clubs.

As you’d expect, the challenges get progressively tougher. The opening bronze game is a standard two-on-two affair while silver introduces legends associated with the team — for instance the Jazz trot out Karl Malone and John Stockton while the Blazers go with Clyde Drexler and Bill Walton. The gold games mix things up, adjusting things like point values, game length and even rules such as allowing a team to take the ball out of the net and score again right away without alternating possessions. There are even some platinum challenges to really test even the most seasoned player.

Road Trip also allows you to select a different team every time you play rather than forcing you to roll with one squad throughout. In addition to switching up your team of choice, a lengthy list of challenges helps keep you invested in varying up your tactics so that you can earn Jam Bucks. Those act as in-game currency to unlock new cheats, additional teams and more.

A handful of old problems still rear their ugly heads, though, highlighted (or perhaps I should say, lowlighted) by the game’s notorious rubber-banding A.I. that practically guarantees a steady diet of having shots blocked and being shoved to the ground as a reward for dominating the computer. It’s also very difficult to defend the CPU when a player in the back court passes to the front court since you can’t see said opponent until the screen scrolls.

Of course, I’d be remiss if I didn’t mention that like its predecessors, NBA Jam: On Fire Edition is at its best when played with and against other people. Online is quite smooth and enjoyable, but for my money couch co-op is still the way to go with this one.

I’ve played the hell out of NBA Jam since its inception, and I feel comfortable proclaiming the On Fire Edition to be the best version of the game to date. It’s fast paced, well balanced and still rates as one of the best cooperative/competitive multiplayer games in existence.

By Herija Green
This entry was posted on Tuesday, January 17th, 2012 at 2:00 pm and is filed under Herija Green, Video Game Reviews. You can follow any responses to this entry through the RSS 2.0 feed. You can skip to the end and leave a response. Pinging is currently not allowed.