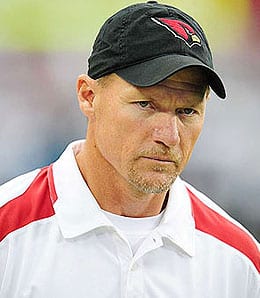 It was a tale of two seasons for Ken Whisenhunt’s Cardinals in 2011.

We’re down to the Final Four with the NFL Conference Finals set for this weekend. And while interest remains sky high in those cities, 28 other teams are now done for the season. Today, we begin to examine some of those unfortunate teams for whom the 2011 season is but a memory.

Let’s kick things off with the Arizona Cardinals.

Early on, it sure looked like the ugliness of 2010 was going to carry on into 2011 for the Cards. Yes, they won their opener over Carolina, but then proceeded to drop their next six games, four of which were by four points or less. In two of the first three losses on that skid, ‘Zona let fourth-quarter leads slip away.

The 2011 season looked like a lost cause by Halloween.

But then suddenly the team turned things around, winning six of their next seven games, and going 7-2 over the final nine weeks to pull out a .500 season. While Arizona is now two seasons removed from its remarkable storybook trip to the Super Bowl – getting shut out of playoff appearances in both seasons since – last year represented a nice improvement over 2010 and definitely created plenty of excitement down the stretch.

On offense, newcomer Kevin Kolb, acquired in the offseason from Philadelphia for Dominique Rodgers-Cromartie and a second round draft pick, was supposed to be the answer at QB for the Cards, a black hole since the retirement of Kurt Warner.

Unfortunately, a turf toe injury and then a concussion pretty much destroyed his season, and while he was active, he showed slight improvements, passing for a career-best 1,955 yards.

When Kolb went down, John Skelton took over as starter and – ironically – that’s when the team started to win. He went 6-2 in games in which he was the primary QB and showed improvements over his rookie season, although it was not without its hiccups (he struggled to a 6-for-19 mark against San Francisco in Week 11). If anyone had told you that Skelton would have to make 275 passes in 2011 and the Cardinals would be a .500 team, you would have though they were nuts. Of course, three overtime wins sure helped.

If for no other reason than proving he can win, Skelton will again be in the mix for the starting role next year, but given the investment the team has made in Kolb, he’ll be given more rope despite his 2-6 mark as a starter last year. Still, Skelton did well enough that some people thought Arizona might ditch Kolb this winter. That’s not going to happen, however. Coach Ken Whisenhunt believes that Kolb will need to improve his footwork if he’s going to take it to the next level.

Wide receiver Larry Fitzgerald, signed to a huge ass contract extension before the season, proved he was worth it as he turned in another Pro Bowl season. While Arizona’s pass attack overall was middling thanks to a string of mediocre QBs, Fitz again did his thing, slipping to 80 receptions, but making up for that with a career-best 17.6 yard average gain to top 1,400 yards receiving for the fourth time – but first time since 2008. The sure-handed receiver has now gone three straight seasons without fumbling. And yes, he can make plays with one hand tied behind his back.

For Beanie Wells, it was another season of frailty, but also one of redemption as he finally delivered on his first round promise by cracking the 1,000-yard mark for the first time in his career. He was able to handle a big workload (245 carries) when he was active and managed to reach double digits in TDs for the first time. If – yes, it’s a big if – Wells can stay healthy in 2012, he’ll be a beast.

The offensive line got better as the season progressed, but there is a ton of room for improvement there.

All told, despite a lot of mediocrity at QB, this team improved from second-worst in total offense in 2010 to 19th overall in 2011. Better? Yes. A long way to go? Yes.

Arizona brought in Ray Horton as the new Defensive Coordinator to improve on its 29th place rankings in 2010; while this team still isn’t a defensive powerhouse, it was much better last year and at least qualifies as middling now, although the pass D needs more work – even durable Pro Bowler Adrian Wilson wasn’t at his best last year.

Of course, it took a while for those defensive improvements to take hold. In the first two weeks of the season, Arizona gave up over 900 yards.

Want to talk improvement? In the first seven games, Arizona gave up 20 TDs; over the next five, it surrendered only five. It was that massively-improved defensive effort over the course of the season that made this team suddenly very competitive.

Rookie CB Patrick Peterson had a wonderful first season, racking up 64 tackles (59 of them solo), a couple picks, and most impressively taking four punt returns to the house for scores.

Overall, it has to be considered a season of progress, especially after that ugly start. Who the hell expected this team to finish .500 after that? And if they had managed to pull out a few of those close defeats early (the losses against Seattle, the New York Giants and Washington were all within grasp), Arizona would have been right in the mix for a Wild Card spot.

The team definitely showed resiliency, trailing at some point in the second half of every single game it played, yet still winning half the time.

The D made great strides as the season progressed. However, the offense will need to improve further if this team is going to challenge for a playoff spot, never mind return to playing winning football.

By RotoRob
This entry was posted on Wednesday, January 18th, 2012 at 1:38 pm and is filed under FOOTBALL, RotoRob, Team report. You can follow any responses to this entry through the RSS 2.0 feed. You can leave a response, or trackback from your own site.