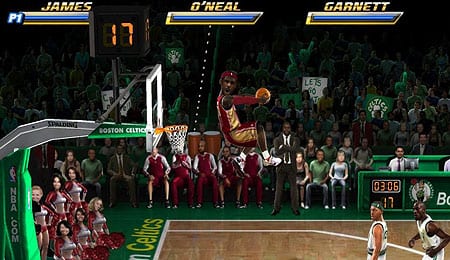 I’d say something negative about LBJ, but he’s reading everything…

I loved NBA Jam growing up. It’s a love that continued into adulthood when my roommate and I delighted in pummeling guests in 2-on-2 contests via the PlayStation’s multitap, running up the score and running our mouths every step of the way. Therefore, it was with great excitement and trepidation that I dove into Electronic Arts’ reboot of the Midway classic on the Nintendo Wii. Could EA possibly recapture the magic of NBA Jam while still updating it? In short, yes.

You’ve got two options with the Wii version of NBA Jam — classic or motion controls. The latter is handled very well. Movement and turbo are mapped to the nunchuk while passing and juking are found on the Wiimote. Jumping for shots, dunks and blocks is done by flicking the Wiimote up and then swinging it down to time the release. It took me a few games to get the feel for it, but once I did I really enjoyed it. The game’s motion control tutorial is also very helpful.

Those that prefer a more traditional setup can turn the Wiimote sidewise or plug in the classic controller. I found the sidewise option to be clunky, but the classic controller was old school perfection for someone like me that played a ton of NBA Jam on the Super Nintendo. Whichever side of the fence you fall on, this game has you covered with tight controls.

Viewing the game through the Wii’s component cables on an HDTV, NBA Jam looks pretty good. Player models are instantly recognizable, the courts look good and the game moves along at an unflinchingly brisk pace. What makes the graphics stand out, though, is the smoothness and variety of the animations you’ll see, somehow making the completely unrealistic dunks appear viable and lifelike. It adds a lot of enjoyment to the game, especially when playing with others. That’s when all those over-the-top dunks and rejections open up chances for good natured trash talking.

EA pays homage to the original by bringing back Tim Kitzrow to deliver a string of one-liners throughout the game, including his famous “Boom shaka laka!” Most, if not all of his classic calls are back along with a bunch of new quips. His energy is definitely the highlight of the game’s audio side as the retro music, while authentic, is largely devoid of personality.

Probably the top thing working against NBA Jam in the modern gaming era is that it’s built off a game that was designed for the sole purpose of gobbling up your quarters. It’s 2-on-2 arcade basketball through and through, and there are only so many ways to expand the replay value of that formula sans online multiplayer (more on that later). To its credit, EA has delivered some clever re-imaginings that diversify gameplay without losing the signature feel of NBA Jam.

Even with the additions, the primary mode remains the traditional ladder system seen in the original as your team battles every other team in the NBA. There have been some minor tweaks, such as facing off against “legendary” teams along the way (i.e., the Knicks with Patrick Ewing and John Starks), but for the most part it’s the same formula those familiar with the series will remember.

Where the new version branches out is with the Remix Tour. Here each NBA team presents a series of three challenges (bronze, silver and gold) that need to be completed to earn points, which are then used to unlock other divisions. It is within this tour that the new game modes are introduced. For example, one addition called Domination has teams trying to acquire and then protect spots on the court as each spot you own allows you rack up points. Another pits three-to-four players against each other in a free-for-all where the lowest score is eliminated every two minutes.

The biggest change for several of the new modes is getting rid of the full court, side-scrolling action and replacing it with a top-down half court view. Both modes listed above use this format, as do “21” (which should be familiar to anyone that’s ever played hoops) and the game’s boss battles. The redesigned arena generally holds up well, though I had considerably more trouble snagging rebounds during these challenges than I did in the traditional game.

There are also a couple of newcomers that use the old school mechanics — “Backboard Smash” and “Remix 2 v 2.” Backboard Smash is a lot of fun as each squad’s backboard has a health meter, which takes damage following each made basket. Jumpers whittle it away slowly while monstrous alley-oops do serious harm. The remixed mode adds a series of power-ups, such as super speed or imperviousness to being pushed, to the standard formula. It sounds good on paper, but in reality it doesn’t bring much to the table and is probably the weakest added content.

Boss battles are one-on-one matchups that represent the most challenging element of NBA Jam with EA once again channeling gaming’s past for some deliberately cheap and aggravating encounters. Some may find their tricks to be cheating, but those that were weaned on that style of A.I. should at least appreciate the nostalgic value of trying to defend Magic Johnson, who can literally teleport and pass the ball to himself, or Larry Bird as he buries three three-pointers in one shot.

Even with all the additions, there remains an elephant in the room: online play. Or more specifically, the complete lack of it. By not offering online play, EA is limiting the Wii version’s value considerably as I have a feeling much of the target audience will have the same issue I have, a lack of local friends that want to come over and play video game basketball. Many of the people I know that’d love this game live in different parts of the country now, and it’s a shame I can’t dial up my old roommate (now living in Seattle) so we can take our NBA Jam skills online for some old fashioned beat downs.

Electronic Arts has done a great job of modernizing NBA Jam while retaining its retro feel. The additional modes are strong, and even after more than a decade the original concept still makes for an incredibly fun game, blending fast-paced action with loads of personality. The lack of online support is a blow, but it shouldn’t stop Wii owners from adding this to their collection.

By Herija Green
This entry was posted on Tuesday, November 9th, 2010 at 2:47 pm and is filed under BASKETBALL, Herija Green, Video Game Reviews. You can follow any responses to this entry through the RSS 2.0 feed. You can skip to the end and leave a response. Pinging is currently not allowed.