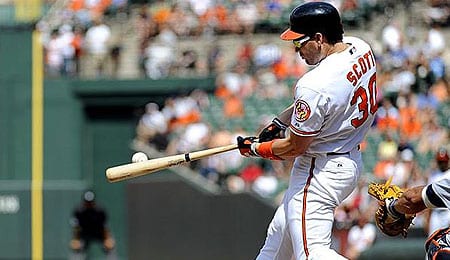 Luke Scott will be a risky Fantasy pick this season.

The Tampa Bay Rays have addressed their DH issues by signing left-handed power hitter Luke Scott to a one-year, $5-million deal (with a $6-million option for 2013 that includes a $1-million buyout). There are also performance bonuses built in based on plate appearances.

He averaged 25 homers a season for the Orioles between 2008 and 2010 before a shoulder injury last season required surgery that prematurely ended his campaign.

The Rays desperately needed another power bat, and if Scott can rediscover his 2010 form – when he ranked seventh in the AL in OPS, higher than the likes of David Ortiz, Evan Longoria, Alex Rodriguez, Carl Crawford and Mark Teixeira – Tampa Bay is again going be a serious force this year.

Last season, Scott’s isolated power dipped to career worst levels, but obviously the shoulder was behind that. He’s definitely capable of hitting better than the woeful .220 he put up last year, too.

The 33-year-old can man the outfield and first base in addition to handling the DH duties and his arrival almost surely means the end of Johnny Damon’s brief tenure with the Rays.

Damon could switch coasts and wind up in the AL West, possibly with Seattle or Oakland, according to the word on the street.

Tampa Bay has tried to land Scott in the past, a couple of times in fact. Because of the shoulder, he may not be ready to play the field until May or June, but if his bat has recovered, he should be worth the investment, which is a pretty decent buy at that price for the Rays,

A lifetime .264 hitter, Scott’s power numbers could be affected by moving to a more pitcher friendly park, so Fantasy owners need to lower their expectations somewhat. He’s no spring chicken, is coming off major surgery and is headed to a tough park for hitters, especially from the left side.

To summarize, don’t reach for Scott on draft day.

After a horrific first half, Jayson Werth managed to play a bit better in the second half, but he still fell miles short of the expectations after getting that huge ass deal last winter. A 771 OPS after the break is certainly better than his pre-All-Star break OPS of 681, but come on! This dude had a 920 OPS in his final season with the Phillies.

Werth missed a few more games than normal last season, but there was no serious injury to explain his crash. How could his overall offensive game have regressed this much?

There’s no doubt that this 32-year-old is now past his peak performance, but no way was he as bad as he showed last year.

Werth struck out more than usual last season and he suffered from some bad luck. His career BABIP before last season was .324; last year, it plummeted to .286. It also didn’t help that Nationals Park is tough against right-handed hitters.

A recovery by Werth will go a long way towards allowing the Nats to compete this year. GM Mike Rizzo had helped compile a pitching staff that has serious potential and with Ryan Zimmerman back to full health, a full season of Michael Morse and another year of development from the likes of Wilson Ramos, Ian Desmond and Danny Espinosa, this team should be much more potent offensively – and that’s without Bryce Harper arriving. Assuming the uber prospect does make the Nats out of Spring Training – which is a possibility – this team could be extremely exciting.

In this week’s Fantasy Baseball Podcast, scheduled for 11 p.m. EST, Buck, Tim and I dissect some of the big deals that have gone down around the majors this winter. You can listen live and interact with us here.

By RotoRob
This entry was posted on Thursday, January 12th, 2012 at 3:32 pm and is filed under BASEBALL, MLB Today, RotoRob. You can follow any responses to this entry through the RSS 2.0 feed. You can skip to the end and leave a response. Pinging is currently not allowed.