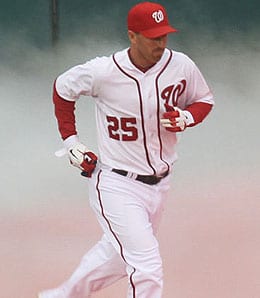 Adam LaRoche should be ready for Spring Training 2012.

The Nationals gave Ryan Zimmerman plenty of time to recuperate from the surgery he had to repair an abdominal tear, leaving owners scrambling for options at the hot corner (which had been decimated beyond just Zimmerman).

However, in the two weeks and change since he returned, Zimmerman isn’t exactly lighting it up. He was 0-for-4 Friday and has managed more than one hit just once in the past 11 games, recording just three extra-base hits during this stretch.

After getting off to such a hot start (hitting .360, albeit in just 25 at-bats before getting hurt), Zimmerman has been icy cold, hitting under .200 for June before his hitless effort Friday. He’s also been scuffling defensively because of an altered throwing motion.

However, we are talking about a young third baseman just entering his power prime who is capable of scoring plenty of runs, smacking his fair share of long balls and driving in a boatload of runs. The face of the Washington Nationals is primed to break out any time now, and prudent owners will use this opportunity to buy low on him.

In this case, it’s best to strike while the iron is cold – especially if the current Zimmerman owner in your league is in contention and getting frustrated.

Just over a month ago, we recommended picking up Michael Morse if you needed an injection of power. Well, here’s hoping you followed our advice, as after mashing six homers in May, Morse bashed eight more in June, while swinging a fine .299 bat for the month. In the process, he’s become a must-own Fantasy asset and could easily wind up in the All-Star Game.

Of course, one of the big reasons we were so bullish on Morse was because of the PT that opened up when Adam LaRoche hurt his shoulder. Well, LaRoche underwent surgery a week and a half ago, and while he’s feeling really good, the prognosis hasn’t changed: he won’t be game ready for six months, which puts him on schedule for Spring Training 2012. Drop him in all redraft formats if you haven’t already.

The last time we checked in on Jayson Werth, he was starting to heat up, but oh man did he ever chill off in June. He managed more than one hit in a game exactly once all month, scuffling to a butt-ugly .154 BA with just nine runs and six RBI. Ugh.

Werth has spent most of the season batting third, but now that Zimmerman is back, he’s been moved up to the two-hole. New manager Davey Johnson wants to see Werth heat up in this slot and then ultimately move him to the fifth spot in the order, where the Nats can better take advantage of his run-producing abilities. Of course, he’ll need to shake his slump first and right now that’s easier said than done.

It’s high time we gave some love to Danny Espinosa. We expected the Nats’ rookie second baseman to rank 20th at his position, but he’s easily been a top 10 player at second, becoming a must-own Fantasy asset in the process.

Espinosa is in a mini-slump lately, going hitless in three straight games, but he’s drawn a walk in each effort, taking him up to 25 walks on the season as his patience starts to return to the levels he showed in his first taste of the bigs last September.

The low BA isn’t a shock, but the power and speed numbers are much better than most expected. Through the halfway point of the season, Espinosa has 15 homers (tops among all rookies) and nine steals. Those could be All-Star worthy numbers.

Coming off his breakout 2010 season, we pegged Tyler Clippard as a top 60 reliever this year. Well, he’s been more like a top 35, definitely morphing into one of the best non-closing relievers to own in the game. And the weird thing is, he’s still widely available in all formats.

Clippard tossed his second straight perfect outing on Friday, not bad for a guy who was apparently dealing with a “tired arm” earlier in the week. (In fairness, Clippard is tied for second in the NL in IP among relievers, so this is something to keep an eye on in the second half.)

The simple fact of the matter here is that Clippard has become a more attractive player to own than some closers, yet he’s not being treated as such by owners. If he’s available in your league, we recommend you remedy that situation.

Still in the Nat pen, when the team added reliever Todd Coffey this offseason, we didn’t see the move as much more than a depth play. However, Coffey has been very strong this year (notwithstanding a few rough outings in the past couple of weeks).

Although Coffey is only of use in extremely deep NL-only leagues, both he and Clippard are on the radar of a few MLB teams that will be seeking bullpen help at the deadline. Washington continues to play well, and is only 6.5 games back in the Wild Card race, but has six teams to pass, so any slip over the next couple of weeks should all but ensure the Nats will be sellers at the deadline.

By RotoRob
This entry was posted on Saturday, July 2nd, 2011 at 1:41 pm and is filed under BASEBALL, MLB Today, RotoRob. You can follow any responses to this entry through the RSS 2.0 feed. You can leave a response, or trackback from your own site.