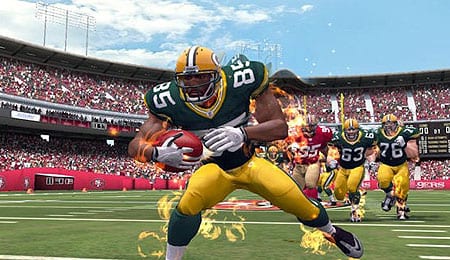 A couple of years ago, EA Sports dropped Madden Arcade, a game that clearly traced its roots back to Midway’s NFL Blitz, to a lukewarm response. This time, EA is skipping the middle man and resurrecting the original with an updated version of NFL Blitz — are the results better?

Indicative of its N64-era lineage, NFL Blitz is light on the button usage. It feels fine defensively when you’re only allowed to toggle between players, shove opponents and dive through the air. On offense, however, it’s not as crisp, particularly when selecting your receiver as the analog stick essentially aims at an intended target and a single button is used to pass. As you can imagine, there are times where you’d like to throw to your running back but end up passing to your heavily covered tight end instead.

With three eligible receivers and four available face buttons, the decision to keep Blitz grounded in the past simply for authenticity’s sake makes little sense. Also, given how “over the top” the game is designed to be, I don’t understand why the juke moves are so subtle — I’d much rather have seen things like Jerome Simpson-inspired flips and exaggerated spins.

Bright, colourful and moving at an impressive clip, NFL Blitz captures the original’s vibe while beefing up the visuals to modern standards. Player models are exaggerated and, though they lack any definable characteristics from one to the next, execute plenty of larger-than-life animations as guys knock each other through the air and even power bomb ball carriers. My lone disappointment is that there are no signature celebrations (Discount Double Check, anyone?).

While the music is typical arcade fare, the announcers do a very good job of keeping the mood light with loads of inane and nonsensical commentary.

If you’ve never played Midway’s version of Blitz before it takes four players per side off the field (7-on-7), does away with designed running plays and turns each snap into a fast-paced free-for-all where nearly any semblance of realism goes right out the window — quarters are two minutes long, 30 yards are needed for first downs and players spontaneously combust for unlimited turbo.

How much you embrace the complete removal of football’s strategic side will go a long way in determining whether or not Blitz is for you. There’s undoubtedly a certain charm to the fast-paced nature of the game, but after you’ve played a dozen or so contests you should have a pretty good idea of what the formula for success is.

At least that’s the case with the A.I., which seems ill equipped to stop you from getting on fire (done by completing three passes in a row to the same player) each time you possess the football. Eventually the rubber banding kicks in and you’ll inexplicably fumble or have a pass picked off, but I found there was little ebb and flow from game to game.

Also disappointing was the removal of the post-whistle action as you can no longer lay out celebrating opponents or lay the smack down via vicious leg drops while they’re prone on the ground. I always found that helped keep the game fun even if you were on the losing end of the score — not to mention that it led to plenty of “OHHHHHHHH!” moments along with subsequent trash talking. The dearth of gameplay options is regrettable as well, especially given the game’s four two-minute quarters can easily eclipse 20 minutes of real time.

Even with those drawbacks, though, NFL Blitz is built for the long haul. Online and co-op gameplay are a lot of fun, and the addition of “Blitz Bucks” to purchase new items provides a nice little incentive to keep going back for more. The game’s primary offline mode, Blitz Gauntlet, offers up a fighter-inspired tower format where you play against three NFL clubs before taking on a boss team made up entirely of some comical opponent like ninjas or gladiators. It’s nothing new, but it adds focus to single-player.

EA kicks off 2012 with a quality downloadable effort for Xbox Live Arcade and PlayStation Network. Priced at 1,200 MS Points (US$15), NFL Blitz is a very good pickup-and-play sports option that should thrive thanks to its online multiplayer.

By Herija Green
This entry was posted on Tuesday, January 10th, 2012 at 11:59 am and is filed under FOOTBALL, Herija Green, Video Game Reviews. You can follow any responses to this entry through the RSS 2.0 feed. You can leave a response, or trackback from your own site.