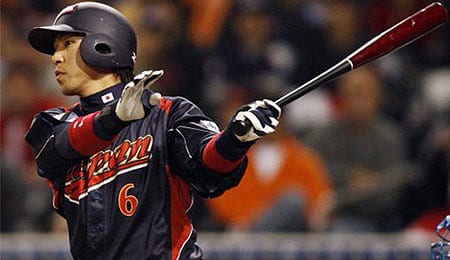 Hiroyuki Nakajimi is not expected to come to terms with the Yankees.

The Yankees are running out of time to reach an agreement with Japanese shortstop Hiroyuki Nakajima. New York won the bidding rights for the 29-year-old with slightly less fanfare than the Yu Darvish posting, but most believe they will be unable to come to terms with Nakajima before the deadline Friday for a variety of reasons (not the least of which is the Yanks have someone named Derek Jeter starting at shortstop and Nakajima wants to play everyday).

If Nakajima doesn’t sign with the Yanks, New York could try to re-sign free agent Eric Chavez, who wants to return to the team. He actually had a pretty good year for the Yanks, and if you can believe it, the 160 at-bats he managed was his highest since 2007. There’s a reason we were calling Chavez a “marginal” player back in 2009.

Speaking of the Yankee bench, outfielder/DH Andruw Jones was re-signed last week to a one-year, incentive-laden deal worth $2 million. As we discussed when we did our Yankees 2011 season review, Jones still brings the power when used judiciously (read: only against lefties), but no longer has speed. His once seemingly destined for Cooperstown career sure has sputtered, but at least he’s still in the game, which definitely didn’t look like a possibility after he hit rock bottom in 2008.

Finally, we’d like to send our condolences to Braves’ trainer Jeff Porter, whose wife was killed in a car accident this weekend. Porter has been the team’s head trainer for almost a decade.

By RotoRob
This entry was posted on Monday, January 2nd, 2012 at 2:19 pm and is filed under BASEBALL, MLB Today, RotoRob. You can follow any responses to this entry through the RSS 2.0 feed. You can skip to the end and leave a response. Pinging is currently not allowed.