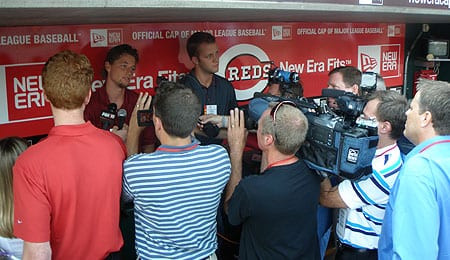 Brad Boxberger (right) was one of the top prospects at the AFL.

The end of one season is simply the start of the next and with that in mind, it’s time to take a look at some of my favourite players that are flying a bit under the radar heading into the 2012 campaign. The latter rounds of any draft or auction always provide bargains that can be instrumental in shaping your Fantasy squads success and 2012 will be no different. Without further ado let’s, take a look at some players worthy of your attention this offseason.

Brad Boxberger, RP, Cincinnati Reds: The money is going to be tight this offseason in Cincinnati with the focus being on trying to find a way to ink both Brandon Phillips and Joey Votto to new deals. Will they have the funds to gamble on an extremely deep free agent closer market or look internally to shore up the bullpen? Boxberger struck out 93 while allowing only 32 hits and 28 walks in 61 IP at two levels in the minors last season. I’m betting the Reds opt for the internal option.

Rex Brothers, RP, Colorado Rockies: Huston Street is getting expensive and the rumour mill has the Rox shopping him this offseason. Rafael Betancourt did a commendable job filling in when Street was hurt in 2011, but at 36 he’s no spring chicken. After a slow start, Brothers turned up it up a notch down the stretch and in 40 2/3 IP allowed 33 hits and 20 walks while striking out 59. He recorded a superb 2.88 ERA in facing 172 batters. More importantly he seemed to earn the trust of Manager Jim Tracy. Tabbed as the closer-of-the-future, the future could be right around the corner for the young flame-throwing southpaw.

Lorenzo Cain, OF, Kansas City Royals: I was all over Cain this season and miracle of miracles the amazing trio of Jeff Francoeur, Melky Cabrera, and Alex Gordon not only closed the door — they nailed it shut and sealed every crack and crevice with duct tape. Well, Cabrera is now a Giant and Cain looks to be penciled in for the vacant slot in the Royals outfield. In 2011 at Triple-A Omaha, Cain slugged 16 homers, with 81 RBI, 84 runs scored, 16 thefts, and a .312 BA in 487 at-bats. The Royals didn’t view him as a throw-in when they acquired him in last winter’s blockbuster Zack Greinke deal.

Yoenis Cespedes, FA: We’ve all had the opportunity to see the outstanding documentary about Cespedes that’s making the rounds in cyber space. Is there truly anything the 26-year-old Cuban ex-pat can’t do? We’re not talking about a Leonys Martin/Dayan Viciedo type of player that is going to need seasoning, but an MLB ready player entering his prime years armed with both a solid track record at the International level of play and hopefully a legitimate birth certificate. When a player smacks 33 homers with 99 RBI, steals 11 bases and posts a .333 BA in the 2010-2011 Cuban Leagues 90-game schedule, you would think he’s more than ready for the challenges lying ahead at the big league level. Cespedes is highly touted and piquing the interest of a ton of teams for a reason.

Steve Cishek, RP, Florida Marlins: Are the Fish in the market for a closer this offseason? Leo Nunez or, as we’ve come to know him now, Juan Carlos Oviedo has not been seen since returning to the Dominican Republic in an effort to sort out his identity issues. Assuming the Marlins don’t dip into the free agent market this offseason, Cishek could be the best in-house option. He managed a strikeout per inning as a rookie in 2011 with three saves and has all the qualities that owner Jeffrey Loria looks for in a player. He plays for the Major League minimum. Okay, okay… maybe the Marlins are changing their ways with a new stadium on the way, but we remain cynical.

Zack Cozart, SS, Cincinnati Reds: Paul Janish has no offensive potential and Billy Hamilton is still a bit further down the road as he works on honing his on-base skills. This leaves the Reds looking at Cozart. He’s coming off Tommy John surgery but is expected to be ready for Spring Training and the double-digit power and speed potential makes him a very intriguing option when attempting to fill a tough position in the latter rounds.

Dee Gordon, SS, Los Angeles Dodgers: The young shortstop had a truly amazing September with 12 stolen bases in 16 attempts, 21 runs scored, a .372 BA, and a superb .398 OBP. The BA, certainly, and OBP (to a lesser extent) are not sustainable, but at Triple-A Albuquerque he was 30-for-34 in the theft department. Now, that is sustainable. When looking at the shortage of quality options at shortstop, a potential 50-stolen base player should be on everyone’s radar. This kid’s definitely no “flash” in the pan.

Kenley Jansen, RP, Los Angeles Dodgers: Javy Guerra is the Dodgers’ closer heading into 2012… or is he? Jansen managed to strike out 96 batters in 53 2/3 IP in 2011 to go along with five saves. Those strikeout numbers are truly off the charts. By season’s end Guerra’s hold on the position was tenuous at best. Can he hold off the Jansen express in 2012?

Cory Luebke, SP, San Diego Padres: The 26-year-old southpaw started the 2011 campaign in the bullpen and moved into the rotation at the end of June. After becoming a starter, in 100 2/3 IP he allowed 81 hits and 29 walks and struck out an amazing 111 batters. The big question is why was he in the bullpen for those first two months? If Petco Park can catapult even Aaron Harang into Fantasy relevance, you have to like the potential to see bigger and better things from Luebke in 2012. Just beware that his strikeout rate may not be sustainable.

J.D. Martinez, OF, Houston Astros: Playing in Houston hasn’t been a real positive from a Fantasy perspective lately, but someone has to hit in the RBI slots in that batting order and the 24-year-old Martinez will be one of them. In three seasons down on the farm he’s posted a cumulative .342 BA, a 958 OPS, and driven in 217 runs in 1,118 at-bats. Martinez doesn’t have to worry about job security as the ‘Stros promoted everyone with the potential to be of assistance in their farm system last summer. Remember his five-homer, 28-RBI August when you get to the mid-teen rounds in your 2012 drafts.

By Tim McLeod
This entry was posted on Friday, November 25th, 2011 at 1:57 pm and is filed under BASEBALL, Sleepers, Tim McLeod. You can follow any responses to this entry through the RSS 2.0 feed. You can skip to the end and leave a response. Pinging is currently not allowed.