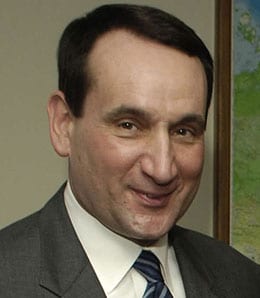 Duke Blue Devils basketball coach Mike Krzyzewski has been named as Sports Illustrated’s Sportsman of the Year for 2011.

I always find it a bit odd that coaches are even considered as “sportsmen,” but obviously they deserve some recognition and Krzyzewski certainly has made his mark over the years, becoming an absolute institution at Duke.

Where the hell do you start with this dude?

There’s the four national championships, the most recent coming in 2010… there’s the 11 Final Four trips in 32 seasons… and how about last month when he earned his 903rd career coaching win to pass Bobby Knight as the winningest coach in Division I history?

And although Duke slipped in this week’s rankings, Krzyzewski has the Blue Devils right in the mix again, currently ranked fifth in the nation.

Last Tuesday they suffered their first defeat of the season – and quite handily, as they were mauled by second-ranked Ohio State 85-63. Wednesday night, Duke should get back on track when it hosts Colorado State.

Are the Blue Devils overrated this season?

It’s pretty hard to ever think of a Krzyzewski-coached team as overrated, but the team’s schedule so far hasn’t been overly difficult. They do have quality wins over Michigan and Kansas, but the trashing by the Buckeyes was telling.

Duke’s non-conference schedule isn’t exactly littered with challenging matches, so it will be interesting to see how the school is seeded come tournament time.

This is a young Blue Devils team that features only one senior – Miles Plumlee, who doesn’t play heavy minutes. Freshman guard Austin Rivers is the team’s leading scorer and the rest of the team’s key performers are juniors.

The big man to watch on the Blue Devils is starting PF Mason Plumlee. His FT shooting isn’t getting any better – which is being exposed more as he’s getting to the line far more often – but he’s averaging a near double-double with 1.5 blocks per game. He’s athletic, and has good size (6’10”, 235), but will need to improve his defense to become a force in the NBA. Expect Plumlee to get drafted towards the end of the first round next year.

By RotoRob
This entry was posted on Tuesday, December 6th, 2011 at 1:28 pm and is filed under Awards, BASKETBALL, College sports. You can follow any responses to this entry through the RSS 2.0 feed. You can skip to the end and leave a response. Pinging is currently not allowed.