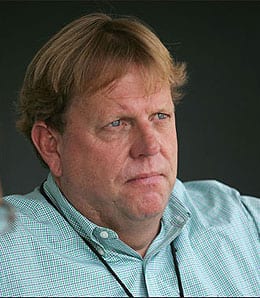 The Cubs pulled the plug on Jim Hendry’s reign of error.

We finally had the regular crew back with Tony Cincotta returning this week from a successful comedy stint last weekend, joining Rich Wilson and I as we spent over an hour looking at the happenings in the world of baseball. We got the ball rolling with a discussion on the great Jim Thome. Is he a lock for the Hall of Fame now that’s he passed the 600-homer plateau? Could he be a first ballot candidate?

Moving forward, we took a few minutes to discuss the Cubbies’ recent firing of GM Jim Hendry. After nine mediocre seasons under Hendry, owner Tom Ricketts finally pulled the plug. How will Hendry be remembered? The Carlos Zambrano and Alfonso Soriano contracts have to be part and parcel to that discussion.

Is GM Dayton Moore straying from the plan in Kansas City or is someone forgetting to explain the details to him? The Royals recently signed Jeff Francoeur to a two-year, $13.5-million extension. That seems like a pretty healthy price to pay for his great season this year. Alex Gordon and Melky Cabrera are both entering their free agent years. Is Lorenzo Cain looking at a future in K.C. in 2012? He’s having a great year at Triple-A Omaha and looks very ready to take that next step.

What’s up in San Francisco? In yet another blow to the Giants’ chances of repeating this season, Brian Wilson has hit the DL with elbow inflammation giving Jeremy Affeldt the shot at the ninth inning gig. Tim Lincecum and Matt Cain, as dominant as they are, can’t be expected to save the day in San Francisco when the Giants are trotting out the likes of Cody Ross, Mike Fontenot, Nate Schierholtz, Aubrey Huff, Chris Stewart and Miguel Tejada on a regular basis.

The Tigers recently traded for Delmon Young. Does Young finally show the world his immense talents or does Jim Leyland go from two to three packs of smokes a day?

Frank Francisco now has the closer gig all to himself in Toronto with Jon Rauch hitting the DL for 3-to-4 weeks with appendicitis. Francisco already missed his first save opportunity Sunday due to a sore shoulder. Can he succeed this time around or are the Jays going to be forced to look at either Casey Janssen or Jesse Litsch in the ninth?

We’ve seen some great young talent promoted lately and we took a few minutes to discuss the potential for Paul Goldschmidt, Brian Bogusevic, Casper Wells, and Kyle Blanks. There are currently plenty of intriguing options for those trolling the waiver wire.

Closing out this week’s show was the two-start pitcher segment. The options this week were Jeff Karstens, Brandon McCarthy, Nate Eovaldi, Bruce Chen, and Ross Detwiler. Karstens has the Brewers and Cardinals on the schedule with McCarthy facing both the Yankees and Red Sox on the road. ERA and WHIP can’t be factors in any decision involving those two starters this week.

As always a fun time was had by all and the full show can be heard by clicking the play button below.

By Tim McLeod
This entry was posted on Tuesday, August 23rd, 2011 at 12:47 pm and is filed under BASEBALL, Podcast, Tim McLeod. You can follow any responses to this entry through the RSS 2.0 feed. You can skip to the end and leave a response. Pinging is currently not allowed.