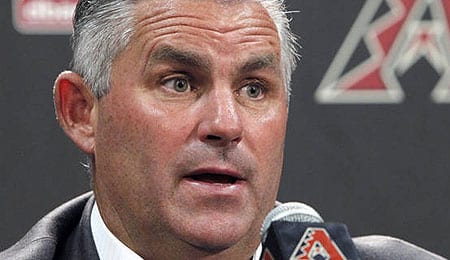 \
Kevin Towers wasted no time in turning around the Arizona Diamondbacks.

As a reward for their surprisingly fruitful season, the Arizona Diamondbacks have given both General Manager Kevin Towers and Manager Kirk Gibson three-year contract extensions.

A lot of things had to break right for the D-Backs to turn things around last season. For instance, Micah Owings — who we identified as having really turned things around at mid-season — going 8-0. You need crazy shit like that to happen for your team to bounce back from 189 losses over the previous two seasons to a division title the next year.

Back in late-July we recommended picking up Brewer outfielder Nyjer Morgan, i.e., the Energy Bunny. We’ve made no secret about the fact (and were taken to task about it on Twitter) that we think Morgan is a total dickwad, but this recommendation had its moments. Sure, Morgan cooled in August (although he did swipe four bases), before finishing strong (14 runs, nine walks, .292 in September).

There’s no doubt that last year was a nice bounceback for Tony Plush after his lacklustre 2010 season, and his extra-base pop rebounded somewhat. However, Morgan’s strikeout rose, while his stolen base total plummeted. Without the thefts, his Fantasy value is capped.

Milwaukee plans to continue with the Morgan/Carlos Gomez platoon in centre field, which means that again Morgan will not be a viable mixed league option next season – even if his steals bounce back, his value will be limited.

While we’re discussing the situation in Milwaukee, it’s been way too long since we devoted space on this site to the sausage races, but a hot dog company celebrated its anniversary on the weekend, and it included an appearance by the famous pork products. Moving forward, we vow to avoid long spells without coverage of everyone’s favourite racing wieners. You need to know what’s going on with these sausages, and we need to tell you.

Still in Milwaukee, heading into the season we ranked Craig Counsell among the top 45 shortstops in the game, but given how much his PT has shrunk, he barely was a top 100 player at the position. Now 41, it’s really time for someone to stick a fork in Counsell. In fact, I think one of the sausages should do the deed. However, the old dude says he plans to play on and the free agent will try to find someone to give him another shot. I’ll give him this: Counsell remains a patient hitter, which is impressive for someone who bats as seldom as he does.

As we discussed in an August Podcast, the Alfonso Soriano contract was one of the albatrosses that ultimately brought down Cubs GM Jim Hendry. Now that Theo Epstein is in charge, he says he’s not ready to divest himself of Soriano.

Epstein said he believes Soriano has more to offer, and it will be interesting to see if he really believes that or was simply paying lip service to the former star. After making a bit of a recovery in 2010, Soriano was awful last season. He had his lowest run total ever; his once prodigious speed has almost completely evaporated; he’s a nightmare on defense; and he now dreams of hitting for his usual middling batting averages.

There are another three years and $54 million left on Soriano’s deal and if Epstein is serious about turning the Cubs into winners, he’ll need to get very creative and figure out how to get that deal off the books, even if it means swallowing a significant percentage of it.

By RotoRob
This entry was posted on Monday, November 7th, 2011 at 11:11 am and is filed under BASEBALL, RotoRob. You can follow any responses to this entry through the RSS 2.0 feed. Both comments and pings are currently closed.