The Wire Troll: The Return of Desmond Jennings 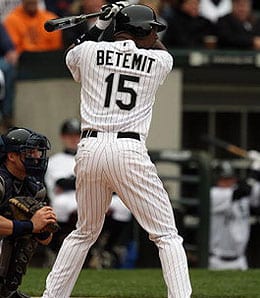 Wilson Betemit gives the Tigers an upgrade at third.

It’s been a rather slow start to the trading deadline period, but keep your eyes and ears open this week as there will definitely be movement as teams attempt to shore up for the stretch run. Will the moves meet expectations? Probably not, but nonetheless this isn’t the week to fall asleep at the wheel. By next Sunday the results will be in and for those that saved some of that FAAB money, you’ll have a chance to spend some, especially in single format leagues. Without further ado, let’s get to this week’s Troll.

Desmond Jennings, OF, Tampa Bay Rays (CBS: 48 per cent owned, Yahoo!: 26 per cent): For those thinking that Sam Fuld could enjoy a second half resurgence you can let go of the dream. Jennings finally got the call and on Saturday went 2-for-3 with 2 runs scored, an RBI, and a stolen base in his 2011 debut. At Triple-A Durham, he was enjoying a solid season with 12 homers, 39 RBI, 17 stolen bases, and a .275 BA in 338 at-bats, scoring 68 runs while hitting in the lead-off slot for the Bulls. If Jennings is available in your league get him rostered and active immediately.

Wilson Betemit, 3B, Detroit Tigers (CBS: 17 per cent owned, Yahoo!: 8 per cent): Betemit landed on the Tigers — his sixth team in seven years –for a pair of prospects and simply has to be an upgrade over Brandon Inge and his 483 OPS. Expect a decent batting average and sprinkling of power, but in a year in which Fantasy owners have struggled to find quality at-bats at the hot corner, he has the potential to benefit Fantasy squads in all formats down the stretch.

Alex Cobb, SP, Tampa Bay Rays (CBS: 9 per cent owned, Yahoo!: 6 per cent): The Rays are going with a six-man rotation for now with Cobb being the beneficiary of this change. In 35 IP with Tampa Bay, he’s allowed 29 hits and 16 walks with 22 strikeouts and is sporting a solid 3.09 ERA and 1.29 WHIP. In his past four starts, Cobb has given up only five earned runs. Now that his playing time is secure — at least for the time being — he makes for a solid play in all formats.

Ezequiel Carrera, OF, Cleveland Indians (CBS: 1 per cent owned, Yahoo!: unowned): The injuries to both Grady Sizemore and Shin-Soo Choo have created a rather large hole in the Indians outfield and they’ve turned to young speedster Carrera to help fill the void. The name of the game with Carrera is all speed, and with 35 thefts at Triple-A Columbus and regular at-bats in the Cleveland lineup there is no doubt he has the skill set to be an asset in that category.

Jose Altuve, 2B, Houston Astros (CBS: 7 per cent owned, Yahoo!: 1 per cent): Finally Chone Figgins has someone he can look down upon that isn’t a bat boy. Smurfs rock, don’t they? Altuve got the call when Jeff Keppinger was traded to the Giants last week and according to Houston management, the prospect is going to get the bulk of the playing time at second base in the second half. The diminutive slugger made his presence felt at Double-A Corpus Christi by slugging five homers with 25 RBI, five thefts, and an outstanding .361 BA in 144 at-bats. The odds are long for immediate success, but if anyone can beat the odds it will be Altuve.

Willie Bloomquist, SS, Arizona Diamondbacks (CBS: 10 per cent owned, Yahoo!: 10 per cent): The fractured ankle suffered by Stephen Drew last week has opened the door for an increase in playing time for Bloomquist. He brings both speed and run scored potential to the table for those looking to fill a hole in their middle infield.

Nyjer Morgan, OF, Milwaukee Brewers (CBS: 23 per cent owned, Yahoo!: 18 per cent): The broken collar bone that will likely sideline Carlos Gomez for the balance of the 2011 season has given Morgan the full-time gig in centrefield for the Brew Crew. He’s only managed six thefts so far this season, but has averaged 38 in the two previous seasons. Is there a second half opportunity in the making?

Clay Hensley, SP/RP, Florida Marlins (CBS: 5 per cent owned, Yahoo!: 3 per cent): The 31-year-old righty was sidelined since the beginning of June with a sprained right shoulder and upon his return has now moved into the rotation. He hasn’t started since 2006 when he was with the Padres, but produced decent results in a home-and home series against the Mets last week. As RotoRob mentioned a few days ago, Hensley is definitely worth a look in deeper mixed leagues and NL-only formats.

Chris Davis, 1B/3B, Texas Rangers (CBS: 14 per cent owned, Yahoo!: 2 per cent): Adrian Beltre is looking at a 2-to-3 week stint on the DL with a strained hammy, giving Davis yet another opportunity to display his skills. At Triple-A Round Rock, Davis was tearing the cover off the ball with 24 homers, 66 RBI, and an incredible .368 BA in 193 at-bats. We’ve seen this before, haven’t we?

Blake Beavan, SP, Seattle Mariners (CBS: 7 per cent owned, Yahoo!: 2 per cent): Beaven held his own against the mighty Red Sox offense on Saturday, allowing three earned runs in 6 2/3 IP. The 22-year-old pitches at home against the Rays in his next outing so is definitely worth a look in both AL-only and H2H formats.

Duane Below, SP, Detroit Tigers (CBS: 1 per cent owned, Yahoo!: unowned): Below fared well in his debut against the A’s, allowing five hits in five IP with one earned run. The 25-year-old southpaw is scheduled for two starts for those looking to stream pitching in H2H leagues.

Chien-Ming Wang, SP, Washington Nationals (CBS: 4 per cent owned, Yahoo!: 1 per cent): The return of the former Yankee appears to be right around the corner, possibly as early as this week. Since the 2007 season, Wang has pitched a total of 137 innings. Tread carefully.

Brandon Laird, 3B, New York Yankees (CBS and Yahoo!: unowned): Laird was called up to replace the injured Ramiro Pena and with Eduardo Nunez struggling defensively, Laird could steal his way into some short-term at-bats.

By Tim McLeod
This entry was posted on Sunday, July 24th, 2011 at 1:24 pm and is filed under BASEBALL, The Wire Troll, Tim McLeod. You can follow any responses to this entry through the RSS 2.0 feed. You can skip to the end and leave a response. Pinging is currently not allowed.