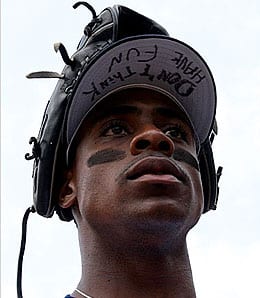 Owners that wound up with Curtis Granderson sure had fun this year.

The 2011 season hasn’t reached its conclusion, but from a Fantasy perspective it’s never too early to take a look down the road and start pondering those always important first round picks. Sunday night on the FantasyPros911 show on Blogtalkradio Tony Cincotta, Rich Wilson, and I put our heads together and went through our first look at 2012 so why not share my early thoughts and put them on the table for debate?

The landscape has changed rather abruptly with long-time first rounders Alex Rodriguez and David Wright sliding out of the opening round. Hanley Ramirez will attempt to regain the form that has made him a consensus Top Three pick as he rebounds from shoulder surgery last month. My early observation is that the outfield should be an area of concern in 2012 and I’ve reflected that decision in my first look at next year’s drafting. I’ve never been one to shy away from controversial decisions and with that in mind let’s give some of my early favourites the once over.

1. Matt Kemp, OF, Los Angeles Dodgers: A season for the ages is the only way to describe Kemp’s 2011 campaign. A year removed from what had to be considered a huge disappointment, Kemp ended this season one homer short of joining the very exclusive 40-40 club and lost the Triple Crown by finishing third in BA. He led or was at the top of every offensive category in baseball and, entering his prime years, he should be a monster in Fantasy Leagues in 2012.

2. Ryan Braun, OF, Milwaukee Brewers: Back-to-back outfield picks? You betcha. The only thing denying Braun No. 1 is Matt Kemp. How many players have the potential to post a 30-100-30-.320 line? He is the total package and could arguably be the top Fantasy player in the game today.

3. Troy Tulowitzki, SS, Colorado Rockies: Despite missing 14 games in September with a hip injury, Tulowitzki managed to assemble a season at shortstop that puts him in a class all by himself. There are no shortstops in the game today that have the potential to hit 30 homers, drive in 100+ runs, and post a .300 BA. The 10 stolen bases is simply icing on the cake. The gap between Tulo and the next best option at shortstop gives his owners a rather nice edge if you’re playing the position scarcity game.

4. Albert Pujols, 1B, St. Louis Cardinals: After a rather slow start in which we saw Pujols hit just .257 in April followed up by only two homers in the month of May, he picked up the pace and by year’s end we saw the Phat Albert that has owned the consensus first pick seemingly forever. I’m giving him a mulligan for actually showing he was human this past year — at least for a short period — and I’m assuming there won’t be a repeat of his early-season woes in 2012.

5. Curtis Granderson, OF, New York Yankees: Granderson’s combination of both power and speed is tough to beat. The short porch in Yankee Stadium has found a friend and I’ll give Granderson the edge over our next pick (Jose Bautista) simply based on the stolen base potential. You can survive with a .260 BA when the power-speed numbers are that strong.

6. Jose Bautista, 3B/OF, Toronto Blue Jays: No, Bautista didn’t repeat that 54-homer year from 2010, but with limited protection in the Jays’ lineup he still found a way to lead the American League with 43 big flies. He also found a way to procure third base eligibility for 2012 and with Brett Lawrie on-board it’s probably the last opportunity for Fantasy owners to take advantage of Bautista’s multi-position eligibility.

7. Robinson Cano, 2B, New York Yankees: Cano is the definite leader of the Yankees moving forward and is a lock for a third consecutive 100+ RBI season. Toss in 25-to-30 homers and a great BA and he has to be the first off the board at the keystone corner.

9. Jacoby Ellsbury, OF, Boston Red Sox: The big question with Ellsbury is the sudden appearance of that 30-homer power. Is it sustainable? I believe that 30 homers and 100+ RBI out of your leadoff bat is probably a bit much to expect, but even a drop into the 20-80 range combined with 100+ runs scored and 40 thefts makes him a very solid mid-to-late first round play.

10-13. Adrian Gonzalez, 1B, Boston Red Sox; Miguel Cabrera, Detroit Tigers; Prince Fielder, Milwaukee Brewers; Joey Votto, Cincinnati Reds: It’s now officially time to jump on the first base train and the options are plentiful. You have the outstanding BA and RBI machine Gonzalez. The consistent year-in, year-out power, average and production skills from Cabrera. Alcohol issues aside, is there a safer pick in the game today outside of Pujols? Then there’s the huge power potential from Fielder (regardless of where he’s launching long balls in 2012). And if those three don’t catch your fancy, Votto provides balance across all the counting categories. Any of these four corner infielders will pay back an investment in spades.

14. Justin Upton, OF, Arizona Diamondbacks: Upton enjoyed a solid bounce-back campaign after a rather mediocre season in 2010. The 24-year-old mashed 31 homers, drove in 88 runs, stole 21 bags, scored 105 runs and hit for a solid .289 BA. There’s a lot to like in those numbers and Upton appears poised for a long run as a top producer in the outfield.

15. Ian Kinsler, 2B, Texas Rangers: Kinsler managed two outstanding accomplishments in 2011. First, the oft-injured star finally bested the 600 at-bat mark and, secondly, he posted his second 30-30 season in a three-year span. Kinsler finished the 2011 campaign with 121 runs scored, ranking second to only Granderson. If Kinsler could find a way to get the BA up into the .280-.290 range and maintain his proven power-speed numbers, he could arguably return Top Five value in 2012.

By Tim McLeod
This entry was posted on Tuesday, October 18th, 2011 at 11:28 am and is filed under BASEBALL, Draft strategy, Tim McLeod. You can follow any responses to this entry through the RSS 2.0 feed. You can skip to the end and leave a response. Pinging is currently not allowed.