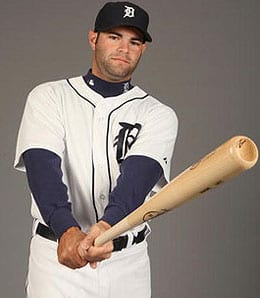 Alex Avila’s breakthrough has made him a waiver wire darling.

It’s time to give the first half waiver wire stars the recognition they deserve. Players plucked from the relative obscurity of the waiver wire can make or break your Fantasy squad over the course of the season and many of these players will be showing up on teams that are currently leading their respective leagues.

Without further ado, let’s give those first half diamonds in the rough their due.

Alex Avila, Detroit Tigers: The 24-year-old has been an offensive force for the Tigers in 2011 and is currently ranked in the top 10 in every offensive category at his position including RBI, in which he has an outstanding 46. Not bad for a catcher that was owned in less than 10 per cent of CBS leagues at the end of Week One.

Michael Morse, Washington Nationals: Morse slugged 15 homers in 266 at-bats in 2010. The power potential has always been evident; the only question heading into 2011 is which position he would play to get a chance to display that potential? The shoulder injury to Adam LaRoche opened up regular playing time and Morse hasn’t looked back. From mid-May to the end of June he slugged 15 homers. The elbow injury that sidelined Morse heading into the break appears to be behind him, so expect more great power numbers in the second half.

Todd Helton, Colorado Rockies: We have co-winners at first base as we’d be very remiss not to mention the great first half put together by Helton. His dismal 2010 campaign had many thinking the veteran was nearing the end of the road in what has been an outstanding career in the Mile High City. With 10 homers and 41 RBI at the break he’s already surpassed his 2010 levels of production. The 37-year-old has defied the critics and is currently on pace for a level of production we haven’t seen since way back in 2005.

Daniel Murphy, New York Mets: Coming out of Spring Training, Murphy was struggling for at-bats at second base with Brad Emaus. Murphy finally claimed the job and subsequently has filled in for both David Wright and Ike Davis. Five homers, 36 RBI, four thefts and a great .305 BA combined with eligibility at first, second, and third base has made Murphy a solid acquisition in the first half.

Emilio Bonifacio, Florida Marlins: Heading into the All-Star festivities Bonifacio was on a tear, amassing 11 stolen bases in his last 11 games. For the season, he’s accumulated 37 runs and 16 thefts, while putting up a solid .285 BA and has replaced the injured Chris Coghlan at the top of the order. Those are some very impressive numbers for a player that was slotted in for a utility role heading into Spring Training.

Ryan Roberts, Arizona Diamondbacks: The off-season trade of strikeout king Mark Reynolds to the Orioles had the D-Backs looking at a platoon scenario in 2011 with Melvin Mora and Geoff Blum. Mora was released at the end of June and Blum has yet to see an at-bat in 2011 as he recovers from knee surgery. Roberts stepped up and has amassed 11 homers, 37 RBI, 47 runs scored and 13 thefts while filling many a hole on Fantasy teams that have dealt with a never ending slew of injuries this season at the hot corner.

Brennan Boesch, Detroit Tigers: Boesch got off to a great start in 2010 before hitting the wall mid-season. Those second half struggles drove his value down to virtually nil entering the 2011 campaign, but he’s responded with another great first half, belting 12 homers with 44 RBI and a great .306 BA. Let’s hope his second half slumping is a thing of the past.

Melky Cabrera, Kansas City Royals: The former Yankee suffered through a horrible 2010 in Atlanta and was released by the Braves in October. He signed a one-year deal with the Royals and his resurgence has been nothing short of amazing. In 382 at-bats he has 11 homers, 51 RBI, 55 runs scored, 12 stolen bases and a great .293 BA. He’s already surpassed his 2010 season totals and in the process reminded us of the former Yankee prospect that looked to have a great future ahead of him.

Jeff Francoeur, Kansas City Royals: Francoeur is now on his fourth team in four years, but seems to have found a home in Kansas City. In 343 at-bats, he’s smacked 12 homers, driven in 56 runs, swiped 15 bases and has amassed a decent .265 BA. Eight stolen bases was his career best entering this season, but with 15 already this year he’s provided a huge bonus in that category. Who could have envisioned that two thirds of the Royals outfield would provide this level of production? (Oh, and their third OFer, Alex Gordon, has been pretty productive as well.)

Matt Joyce, Tampa Bay Rays: An outstanding May in which Joyce slugged seven homers and drove in 21 runs saw his ownership levels jump from 15 to 93 per cent and was largely responsible for him making his first trip to the All-Star festivities this week. Joyce slumped in June while dealing with nagging shoulder issues, but looked to be finding his power stroke heading into the break. Expect more solid production in the second half.

Bartolo Colon, New York Yankees: The marvels of modern medicine have resurrected Fat Bart from the dead. Colon hasn’t pitched effectively since way back in 2005 when he was a member of the Angels rotation. However, in the first half this season, he has six wins, a great 3.20 ERA and has allowed 81 hits and 22 walks in 90 IP with 79 punchouts. Brian Cashman’s low-budget rotation has fared very well in 2011.

Philip Humber, Chicago White Sox: Humber couldn’t even break into a pathetic Royals rotation in 2010 and was subsequently released, and then claimed and released by the Athletics, before eventually being claimed by the White Sox. It was a busy offseason for the former Mets first rounder. The White Sox planned to use Humber, 28, as a temporary fill in for the injured Jake Peavy, but that changed rather abruptly as Humber allowed 87 hits and 27 walks in 107 1/3 IP while posting eight wins — numbers that were largely responsible for the innovative six-man rotation in Chicago.

Jeff Karstens, Pittsburgh Pirates: The Pirates are four games over .500 at the break and in a tie for the division lead in the NL Central. Karstens and the rest of the rotation in the Steel City have played a big hand in that feat. He has seven wins and has allowed just 88 hits and 18 walks in 98 2/3 IP while assembled an outstanding 2.55 ERA, sixth in the NL. He is still owned in only 58 per cent of CBS leagues, so there may yet be a chance to grab him in some leagues.

Josh Tomlin, Cleveland Indians: There are reasons why the Tribe was atop the AL Central for most of the year and the surprising starting pitching led by Tomlin is right at the top of that list. In 115 2/3 IP, he’s allowed 104 hits and a scant 14 walks, to go along with 65 strikeouts and a solid 3.81 ERA. His 10 wins is tied for fourth in the AL and those that gambled on Tomlin have reaped huge rewards for their Fantasy squads.

Ryan Vogelsong, San Francisco Giants: Nobody could have ever envisioned this situation. Vogelsong went from being a Giants’ high draft pick in 1998, to being traded to the Pirates, to a three-year stint in Japan, and then returning to North America, playing on not one but two minor league teams in 2010. He procured an invite to the Giants camp this spring and after only two starts at Triple-A Fresno was thrust into the rotation as a stop gap measure when Barry Zito went down with a foot injury. The rest is history and this week he went from having no job to an All Star berth in five short months. Vogelsong’s 2.17 ERA at the break is second in the NL to only Jair Jurrjens of the Braves. What an amazing story.

Fernando Salas, St. Louis Cardinals: Ryan Franklin failed miserably. Mitchell Boggs had a shot and didn’t win over Manager Tony LaRussa. Long-time closer-in-waiting Jason Motte never really entered into the equation. Meanwhile, Salas seized his opportunity and didn’t look back. He’s now 16-for-18 in the saves department and has a solid hold on the closer role in St. Louis heading into the second half.

Sergio Santos, Chicago White Sox: Matt Thornton emerged from Spring Training with the job of replacing former closer Bobby Jenks and he promptly blew two saves. Manager Ozzie Guillen immediately went the closer-by-committee route and by the end of April Santos had the gig all to himself. His 18 saves and 56 strikeouts in 42 IP at the break have cemented his role as closer in the Pale Hose pen.

Jordan Walden, Los Angeles Angels: This particular closer-in-waiting didn’t have to wait very long this year. Walden took over from an ineffective Fernando Rodney at the beginning of April and, although he’s struggled at times, has 20 saves at the break. The 23-year-old righty looks to be on the verge of a long run in the ninth inning gig for the Angels.

By Tim McLeod
This entry was posted on Thursday, July 14th, 2011 at 12:01 pm and is filed under BASEBALL, The Wire Troll, Tim McLeod. You can follow any responses to this entry through the RSS 2.0 feed. You can leave a response, or trackback from your own site.