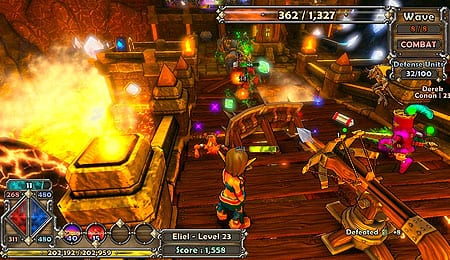 Dungeon Defenders gets hectic when you’re, you know, defending your dungeon.

If tower-defense classic Rampart and dungeon-hoard battler Gauntlet dated, got married, and had a baby (no child video games out of wedlock here), you’d probably get Dungeon Defenders. Using cel-shaded graphics and a combination of tower defense/action RPG gameplay, Dungeon Defenders is probably best described as simple to learn, hard to master — especially if you’re playing solo. With an immense amount of options from RPG-esque leveling and upgrades, it’s a unique trip that both taxes your strategic brain and your trigger finger in one of the best downloadable releases we’ve seen this year.

Crisp and efficient, there’s actually not too much to Dungeon Defenders’ controls. Building your tower defense is achieved through a menu system activated by the trigger button. Actual placement takes place by maneuvering the environment, then activating the menu and assigning the defense election.

In Combat phase, Dungeon Defender plays like a straightforward action game with a brief bit of platforming. As you maneuver through the battlefield, you have the standard action/platformer set of controls: jump, attack, and secondary attack. All of the menu options from the Build phase are available using the same trigger button — however, you’re moving in real time, so cycle through those menus at your own peril.

While the world of Dungeon Defenders is a colourful, cute cel-shaded environment, it’s certainly nothing groundbreaking. The characters are designed to look cartoony, as are the enemy monsters. Everything is smooth and crisp, though the camera (which can be set to different viewing angles) sometimes gets caught in a corner or is obscured by objects in the environment.

A big part of Dungeon Defenders’ gameplay is menu driven, and part of the problem with that is the menus get quite cluttered with information. It’s good that the developers tried to present all options on one screen — you’ll make use of pretty much all of your buttons in just about every menu — but it winds up being overwhelming, particularly when you’re first learning the many nuances of the game. This is a minor annoyance when you’re building, but if you’re trying to access menus in real time during the battle phase, it can quickly become a detriment.

The primary voiceover you hear is of the game’s narrator/tutorial. Get used to his voice during your first few hours because you’ll be hearing it a lot with so many levels of detail in gameplay options. The actual characters grunt and groan in cartoonish fashion, some of which reminded me of when Cartman gets pissed off on South Park.

The soundtrack could be ripped from any epic fantasy movie, which does almost feel a bit too epic for a game with such cartoony visuals. when the build phase ends and the battle phase begins, the operatic choral voices rise up and for me, it felt a bit melodramatic. Other people might find it suitable.

What are you defending? The crux of the game is something called an Eternia Crystal. (If you’re a child of the 1980s like me, then it’s hard to separate that name from thoughts of He-Man.) There’s a story behind this, but it’s a fairly pedestrian fantasy to get battle going. Just know that the Eternia Crystal is what you have to defend at all costs.

Simply describing the game like that doesn’t do it justice, though. The variation in both phases comes from using one of four character classes (which you can switch to at any time during the Build phase). The character classes are very much in the mode of Gauntlet — mage, warrior, elf, and a monk — and they each have different attacks to go with their skillset. More importantly, they have different tower options, and the fact that you can switch between characters while building means that your tower defense system can take on many different styles depending on your playing preference.

Each of your characters level up in true action RPG fashion, opening up paths to new tower attacks, greater hit points, increased mana (the game’s currency system used to purchase/repair tower systems), stronger melee attacks, and more. At the same time, you’ll collect new weapons and armour during combat, and these can be upgraded as well. This is necessary, as you probably won’t get through a level on the first go-around (each level consists of a set number of attacking hoard waves), but you do keep your experience and upgrades even if your Eternia Crystal is destroyed.

With each character’s varied tower defenses, you can set up elaborate systems based on many different types of strategies — choke points, mine fields, and other techniques will vary based on your own personal preference, and that will probably stem from which character class you use for melee combat. Other nuances include elemental counterattacks and combat pets; combined with enemy data during the Build phase (quantity and type of enemies during the upcoming wave) and you have options for conducting war the way you want it.

In between levels, you can go back to the game’s local tavern to manage all of your characters, in addition to selling unused loot and buying upgrades. While you can level up in the Build/Combat phase, the tavern provides more options for equipment and preparation.

Dungeon Defenders supports both local and online co-op, and it’s best to play it that way. It’s obviously faster to build with two or more people doing it, and it’s easier to fight in melee with multiple combatants. The volume of enemies becomes overwhelming at times, and if you’re playing this solo, there will be plenty of times when you’ll wish someone was at your side. Part of the problem with this is that character switching can only be done at one point, so you’ll be doing a lot of running back and forth while you set your map up.

The other problem is that experience and mana are character-specific, not team-oriented. That means that you’re going to encounter difficulty if you want to spread out your game experience among multiple character classes, as there’s simply not enough to go around unless you level-grind earlier levels.

The flip-side to this is that Dungeon Defenders provides multiple types of gameplay, including a survival mode, various challenges that wreak havoc to the map and the situation, and tower-only strategy mode. There’s also player-vs.-player gameplay; thus, if you combine the amount of variation between game modes and character customization, you’ll find an incredible amount of depth and replay value — but in many cases, it’s easier and more fun with another player by your side. Oh, and if you’re the type of gamer that needs character and narrative to propel things forward, you’re not going to find that here.

By taking the best of tower defense and action RPG, then sprinkling in a variety of gameplay modes and multiplayer options, Dungeon Defenders provides an experience that’s at once unique and familiar. Most importantly, it’s a lot of fun despite some technical flaws. Who would have thought that Rampart and Gauntlet would have such a beautiful baby?

By Mike Chen
Tags: Action RPG, Cartman, Dungeon Defenders, Dungeon hoard battler, Eternia Crystal, Gauntlet, He-Man, Rampart, RPG, South Park, Tower defense
This entry was posted on Monday, October 24th, 2011 at 3:09 pm and is filed under Mike Chen, Video Game Reviews. You can follow any responses to this entry through the RSS 2.0 feed. Both comments and pings are currently closed.