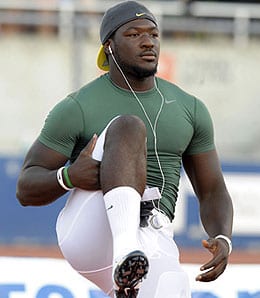 LaGarrette Blount owners may be scrambling around for a replacement.

Welcome to the Week Six edition of the Wire Troll. Injuries are once again a big part of the Fantasy football picture this week, as running backs LeGarrette Blount and Joseph Addai are nursing maladies that could threaten their status. Several other key players, including Rashard Mendenhall, are in various stages of healing and will be worth monitoring as Sunday approaches. Fantasy IDP leaguers were stunned by the loss of Mario Williams, who is out for the season with a torn pectoral muscle. Replacing injured players is a staple skill of the true masters of the waiver wire, and a little acumen and impeccable timing can go a long way towards winning your Fantasy league championship

A situation of a different kind is simmering in Cleveland, where disenchanted running back Peyton Hillis (the Madden Cover Boy… but no, there’s no curse, really, there isn’t) appears to be seeking a trade to, well, somewhere that isn’t Cleveland. While that’s understandable on many levels, the departure of a stud runner like Hillis could create some serious waves in the Fantasy Football world. Stay up to date with this and other waiver wire-worthy topics by following the Wire Troll on Twitter.

Lastly, the Troll would like to send out some special recognition to Denver clipboard holder/sideline fashion plate Brady Quinn, who earned a “Best Boyfriend Award” from his significant other — U.S. gymnast Alicia Sacramone — for catching a redeye flight after his game to be with her for her Achilles tendon surgery on Monday. While some would rush to revoke or at least temporarily suspend Quinn’s man card for such a transgression, the Troll is willing to grant the big lug a pass on this one. Before you chastise Yours Truly for such magnanimity, I would ask that you have a glance at Brady’s squeeze in one of her recent endeavours — and see if you might want to revise your position. Thought so.

Curtis Painter, Indianapolis Colts: Well, what have we here? Painter threw for 277 yards and two touchdowns — without a pick — against Kansas City in Week Five, thus solidifying his hold on the Colts’ starting job. There’s a downside here, though: 237 of Painter’s yards came in the first half, and that kind of inconsistency should be expected as he adapts to the NFL. He is making progress, though, and as long as he’s at the helm of the Colts’ weapon-laden offense, he’s worthy of consideration in larger Fantasy leagues. He faces a tough matchup in Cincy this week, but Painter is a serviceable option in two-quarterback leagues if one of your regulars is on a bye.

Tim Tebow, Denver Broncos: Tebow replaced a struggling Kyle Orton in Week Five, and came within an eyelash of leading his team to an improbable come-from-behind victory. The youngster has been named the starter for Week Seven (after Denver’s bye in Week Six), and he’ll undoubtedly be one of the top waiver-wire targets over the next several days. Tebow has a below-average arm, above-average legs and an uncanny ability to put his team in a position to win. How this translates into Fantasy value remains to be seen, but Tebow’s running ability alone makes him worth adding in most Fantasy leagues.

Delone Carter, Indianapolis Colts: With starter Joseph Addai nursing a gimpy hamstring, Carter is expected to shoulder a rather heavy load in Week Six. The rookie was rather unimpressive with just 34 total yards last week, but he did manage to punch in a short touchdown. His bowling ball-style frame gives him a decided advantage in short-yardage situations, so he could at least assume the goal line carries in the near future. Keep an eye on Addai’s health status, and if he’s looking iffy, go ahead and make the move on Carter — especially in deeper leagues.

Jackie Battle, Kansas City Chiefs: Battle came out of nowhere — the four-plus seasons, 155 rushing yards section of nowhere — to dash for 119 yards on 19 carries in Week Five. The Chief backfield is an ugly scene, with scatback/wideout Dexter McCluster and the rapidly aging Thomas Jones the only other viable candidates for carries. Battle has fresh legs, a non-nonsense running style and a 238-pound frame that could make him a force at the goal line. The Chiefs are on a bye in Week Six, but Battle is still worth adding, as he figures to be the top ground option in K.C. when Week Seven rolls around.

Doug Baldwin, Seattle Seahawks: The undrafted rookie racked up 83 receiving yards in Week One, then virtually vanished for two games before posting 5-84-0 in Week Four and then exploding for 8-136-1 against the Giants on Sunday. The Seahawks figure to be playing from behind most of the season, and there should be plenty of Fantasy points available for Seattle wideouts. Opposing defenses will key on Sidney Rice, but Baldwin’s big-play potential makes him an intriguing option in deeper Fantasy formats.

Darrius Heyward-Bey, Oakland Raiders: Heyward-Bey has racked up 11 receptions for 214 yards and a touchdown over his past two games, and could finally be fulfilling the expectations the Raiders had when they drafted him with the seventh overall pick back in 2009. He faces a tough matchup this week, but Heyward-Bey’s blinding speed and improving technique makes him a decent Fantasy flex play in deeper leagues.

Delanie Walker, San Francisco 49ers: The 49ers’ receiving corps suffered another blow last week, losing starter Josh Morgan to a fractured leg during the team’s 48-3 rout of Tampa Bay. Morgan was inexplicably still in the game with about four minutes to play, and suffered his injury after hauling in a 19-yard reception. San Francisco is paying for its lack of prudence, as the remaining options at wideout — Ted Ginn, Jr., Michael Crabtree and Kyle Williams — are mediocre at best. Former starter Braylon Edwards, meanwhile, probably won’t be back in action until Oct. 30, after the team’s bye week. Enter Walker, who recorded his second touchdown of the year in Week Five, and has the skills to play outside if need be. If you’re in a rather deep league, Walker’s worth a look, as he figures to see an increased number of targets while both Morgan and Edwards are on the shelf.

Dan Bailey, Dallas Cowboys: Bailey has knocked home 12 of his 13 field goal attempts this season, and he should continue to be a steady Fantasy producer as long as he’s kicking for the solid Dallas offense. Former booter David Buehler is still hanging around, but he won’t pose a threat as long as Bailey keeps splitting the posts. Bailey is a fine add in deeper leagues, or if your regular kicker is on a bye.

Washington Redskins: The ‘Skins are third in scoring defense and sixth in total defense this year, and they face the mistake-prone Eagles in Week Six. Washington has forced a league-best eight fumbles, while Philly has coughed it up five times already. The Eagles should put up their share of points, but the odds favour a big play or three from the aggressive and opportunistic Redskins D.

George Wilson, DB, Buffalo Bills: Mr. Wilson has been an absolute menace to opposing offenses thus far, racking up 47 total tackles and picking off three passes. He was particularly good Sunday, recording 11 stops, snagging a Michael Vick pass and defending three others. Wilson is a veteran who has only exceeded 100 tackles once during his five-year career, but while he’s piling up numbers like this, he should be owned in most IDP formats.

Jason Pierre-Paul, DE, New York Giants: Justin Tuck’s battle with his groin injury continues to frustrate his Fantasy owners, but Pierre-Paul has stepped in for the D-line stud and posted some nice numbers of his own. How nice? How about 28 total tackles and seven sacks’ worth of nice? Tuck suffered a setback this week, so conventional wisdom would seem to indicate that the G-Men will hold their star lineman out until after their bye in Week Seven. Pierre-Paul is a must-start if your league has a defensive line position — at least until Tuck returns. Don’t be too hasty to cut ties with JP2 even after Tuck is back, though, as the 22-year-old’s strong play has undoubtedly won him more playing time.

By Buck Davidson
Tags: fantasy football
This entry was posted on Wednesday, October 12th, 2011 at 11:17 am and is filed under Buck Davidson, FOOTBALL, The Wire Troll. You can follow any responses to this entry through the RSS 2.0 feed. Both comments and pings are currently closed.