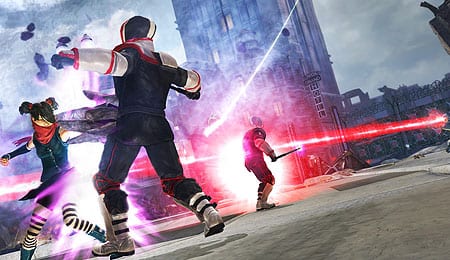 You’ll be fighting these stunrod-wielding gentlemen a lot.

Having never really been a reader of comic books, my exposure to the X-Men is limited to the films (damn you, Brett Ratner) and the Saturday morning cartoon from the early-to-mid ’90s. This year’s theatrical release — X-Men: First Class — wasn’t great, but it was good enough to rekindle my interest and had me looking forward to Silicon Knights’ X-Men: Destiny.

This is old-school button-mashing brawler combat where you unleash combinations of light (X) and heavy (Y) attacks to lay waste to your foes. You can also utilize your mutant abilities by holding down the right trigger and pressing one of three face buttons. Your mutant power meter shows how much each attack type will use, which makes it easy to keep track of.

Defensively your options are to block or dodge. The latter is much more effective and fits into the pace and style of the game. Equipped items can grant you additional options, such as a shoulder charge that scatters enemies. They don’t deal much damage, but they’re good for getting out of tight spots.

Outside of a few issues with the camera becoming disorienting, it’s very workable. However, there isn’t much variety. No grapples. No throws. No counters. It’s just you and your face buttons unleashing string after string of four-part combos — which you can’t interrupt even if you’re about to get hit.

From a purely graphical standpoint, X-Men: Destiny is pretty decent. You’re not going to be blown away by anything, but all of the game’s mutants look good and there’s a respectable level of detail worked into the locations. The frame rate struggles to keep up with the action, though, which is not what you want out of an action brawler like this. Signature mutant abilities aren’t as visually exciting or cool as they should be, either.

A lot of mutants make appearances during the game, and most of the lines are delivered well. Where the game slips up is in the disjointed tone and tenor of conversations when discussing multiple topics with an NPC. Too often the emotion being conveyed is out of place with what you just heard, and that ruins any flow to the dialogue. The music fails to inspire.

Human and mutant relations appear to be on the precipice of collapse following the death of Professor Xavier at the hands of Bastion (no, not the Summer of Arcade game). In an effort to quell tensions, the new leader of the X-Men, Cyclops, is attending a peace rally that is suddenly interrupted by a terrorist attack that appears to be the work of Magneto.

Unraveling the true origins of the attack is the central theme of X-Men: Destiny, which takes the bold step of casting you as one of three unknown mutants that were attending the rally and now find themselves swept up in the day’s events. On the surface, allowing you to craft a mutant from scratch is an intriguing idea, as is the built-in choice system that gives you the option of siding with the X-Men or Magneto’s Brotherhood during various encounters.

Unfortunately, your choices don’t really resonate, and with the exception of some faction-specific side missions your experience won’t deviate much regardless of what you do. In fact, none of your early choices have any bearing on the final missions because no matter what you’ve done up to that point you’ll be given the option to join either side prior to the home stretch. Mass Effect it ain’t.

Even with an underwhelming branching system with the storyline, X-Men: Destiny could’ve still been a lot of fun with strong combat and unlockable mutant abilities. That’s not the case, either. Combat is repetitive with a limited number of attacks and combos at your disposal. I never hated fighting enemies, but because there isn’t much variety in the types of foes you face or their tactics it felt like I was duplicating the same basic steps over and over again.

Another reason for that is there really aren’t any other elements to the gameplay. The main path you travel has you go from one area of fighting lots of enemies to another, and the optional side missions (known as challenge arenas) are more of the same. Outside of some basic climbing sequences that’s pretty much what you’ll be doing from start to finish.

You do grow stronger and learn more moves as you progress, spending the experience points you earn from defeating enemies to upgrade your abilities. Collecting X-genes is another way to customize your character. You can equip three at a time (offensive, defensive and passive) from a number of different mutants, each of which give you supplemental skills. If you can find all three from the same mutant along with his or her suit you can achieve a special X-boost, though I found mixing and matching worked better for me.

Conceptually, X-Men: Destiny had a lot of potential. However, repetitive combat and a choice system that doesn’t carry enough weight (especially given the game’s six-hour run time) means it tops out as a simplistic button masher.

By Herija Green
This entry was posted on Tuesday, October 11th, 2011 at 11:38 am and is filed under Herija Green, Video Game Reviews. You can follow any responses to this entry through the RSS 2.0 feed. You can leave a response, or trackback from your own site.