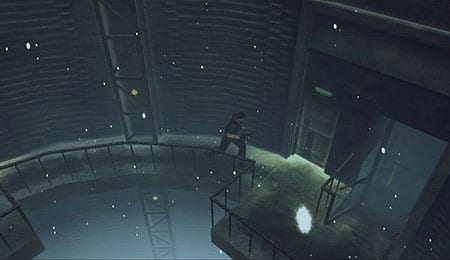 Claire isn’t the only playable Redfield in Code Veronica.

When Capcom originally released Resident Evil: Code Veronica X, not only was it the first RE title to launch on a system other than the Sony PlayStation (Sega Dreamcast), it also marked legitimate progress for the series. Gone were pre-rendered backgrounds, which allowed for modest camera movement, and a more adult-themed story was also introduced. At the time of its release I considered it my favourite RE game to date.

Of course, that was over a decade ago, and the series’ true evolution (Resident Evil 4) hadn’t happened, yet. Now re-released as Resident Evil: Code Veronica X HD, does this one-time measuring stick of the survival horror genre still have what it takes to resonate in 2011?

If you’ve never played the older Resident Evil titles you may have heard the term “tank controls” when referencing movement. Well, that infamous setup is alive and well in Code Veronica X HD. Pushing left or right on the analog stick (or d-pad) rotates your character, while pushing down on the stick makes them move backward and up sends them forward. Even for someone like me, who played through all of the original RE titles, it still feels painfully outdated now.

Likewise, the auto aim makes for relatively skill-free shooting. All you have to do is ready your weapon and rotate in the general direction of an incoming zombie and you’ll hit them. You can adjust to shoot high (useful for shotgun decapitations) and low, but that’s it.

Rounding out the package is an annoying inventory system that requires you to enter it every single time you want to swap weapons. And since conserving ammo by knifing downed zombies is an important part of surviving (at least early on) you’ll be doing it a lot. If you consider RE4’s controls old fashioned you’ll find these completely archaic.

Perhaps no group of games has aged more poorly than PlayStation One/Dreamcast era titles, which lack the charm of old-school 8- and 16-bit visuals and end up looking like a poor man’s version of modern games. Even with cleaned up graphics and lighting effects, Code Veronica falls comfortably into that designation. Some of the ambient scares still pack a punch thanks to creepy locations and cleverly thought out camera angles, but there’s no disguising that this game hasn’t aged well.

As with the rest of the early RE games, Code Veronica features some truly dreadful voice acting. It’s a fun bit of nostalgia for those of us that have been around since the game’s inception, though newcomers are unlikely to be in on the joke. Conversely, the game’s music and sound effects hold up quite well, and they do a strong job of creating the desired atmosphere — that includes the sense of relief one gets from hearing the relaxing tune that signifies the safety of a save room.

Set three months after the events of Resident Evil 2, Code Veronica is essentially a direct sequel to that title as it follows Claire Redfield’s search for her brother, Chris. It opens with what was, at the time, a fantastic sequence showing Claire’s attempted infiltration into an Umbrella Corporation in Paris that results in her capture. The game picks up with her incarcerated on the mysterious Rockford Island, which has become the latest location for a T-virus outbreak (read: zombies!).

It’s a decent enough story, particularly by 1999 standards, but younger gamers may take issue with the game’s slow pacing. Unlike the past two RE games, Code Veronica is still focused on atmosphere rather than action. Ammunition is scarce, most enemies move at a snail’s pace and backtracking is rampant as advancement often comes down to locating a locked door and then following several steps to get it open before advancing to the next area.

Combat is also fairly mindless thanks to auto aiming as you’re pretty much left to pull the trigger until your enemy dies. Due to limited ammo there are also times when it’s better to avoid enemies entirely, which would be fine except for the aforementioned unwieldy controls.

Where Code Veronica X HD still succeeds, however, is in creating tension during gameplay. Enemies are often concealed by the game’s camera system while others are scripted to pop out at inopportune times to take a bite or two out of your tasty flesh. Your ability to carry weapons and supplies is very limited, which makes shuffling your inventory important and ensures you’re never overpowered.

And then there are the save points — spread out and requiring ink ribbons (a finite resource) to use. Even a decade-plus later there are still few things more nerve racking than running low on health and ammo while desperately hoping to find that next save point. As without checkpoints, death means starting back at your last save, which could be 30 minutes ago or more depending on your style and available stockpile of ink ribbons.

Wherever it once stood in the RE hierarchy, Code Veronica X HD is (for better and worse) a relic. Series vets might enjoy revisiting it for a purer form of survival horror, but anyone that started with Resident Evil 4 or later may find those games’ predecessor to be too slow and outdated.

By HC Green
Tags: Capcom
This entry was posted on Thursday, October 13th, 2011 at 9:49 am and is filed under Herija Green, Video Game Reviews. You can follow any responses to this entry through the RSS 2.0 feed. Both comments and pings are currently closed.