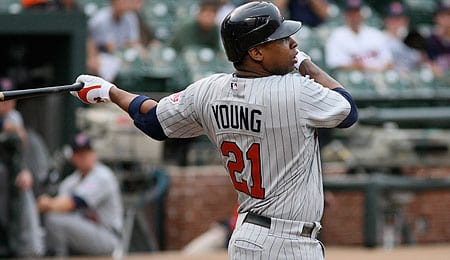 The Tigers are really going to miss Delmon Young in the ALCS.

Despite posting the best record in the American League this season, the New York Yankees will not be representing the AL in the World Series, the second straight season they’ve failed to make it to the final two. In fact, after getting dispatched by the Detroit Tigers in a thrilling five-game set, Joe Girardi’s club won’t even make it as far as the ALCS for the first time since 2008, which was the last time the Pinstripers missed the playoffs.

Speaking of the playoffs, we’re just thrilled that MLB is finally discussing going from eight teams making the postseason to 10, a change that could happen as soon as next year. It’s a long-needed move that will help generate much more interest in the game and is a fan-friendly decision. So kudos to MLB. And that’s not something you’ll hear me say very often.

The Tigers scratched their way back into Saturday night’s soaked affair, but couldn’t quite erase Texas’ early three-run lead in Game One of the ALDS. The fact that Detroit is going to have to push through in this series without Delmon Young (oblique) really hurts, as he proved to be their most dangerous hitter against the Yankees.

When the Tigers first acquired the enigmatic Young, we assumed that he would lead to the death of Manager Jim Leyland. In fairness, Young stepped up after arriving in Motor City, turning around what had been an awful first half with an even more awful team. In 84 games with the Twins, Young –- coming off a breakout season in 2010 — had managed just four homers, 32 RBI and 26 runs. In less than half as many games (40) as a Tiger, he swatted twice as many homers (eight), equaled his RBI total (32) and surpassed his run total (28). Now that’s what you call being a difference maker.

Yup, Detroit’s offense – which is excellent, but not quite as daunting as Texas’ attack – will sorely miss Young in this series.

By RotoRob
This entry was posted on Sunday, October 9th, 2011 at 12:08 pm and is filed under BASEBALL, MLB Today, RotoRob. You can follow any responses to this entry through the RSS 2.0 feed. You can leave a response, or trackback from your own site.