The Wire Troll: Jonesing for Jacoby 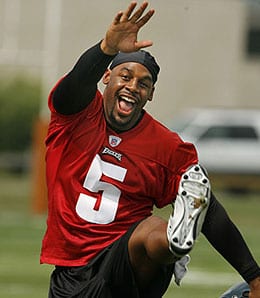 Donovan McNabb could be a decent play in Week Five.

Welcome to the Week Five edition of the Wire Troll. Injuries dominated the Fantasy news blotter this week, and none rocked the headlines like Andre Johnson’s scary-looking strained hamstring — which is expected to keep him out for about three weeks. Several other Fantasy-worthy players are limping and gimping to one degree or other, and quite a few of those dreaded “game time decisions” appear to be in the offing.

Week Five also marks the beginning of the NFL bye weeks, and Fantasy owners will be scrambling to the waiver wire in search of viable fill-ins for their missing starters. There’s a strategy to keep in mind here: Watch your opponents’ transactions carefully, as they will sometimes drop a valuable player simply because they have a bye week. This phenomenon truly manifests itself as the season rolls on and teams become so desperate to win on any given week that they make some truly perplexing moves. Needless to say, you should be right there to snap up that starter as soon as he clears waivers — you’ll be glad you did come playoff time. For all of the latest Fantasy news, don’t forget to follow the Wire Troll on Twitter.

Donovan McNabb, Minnesota Vikings: Yes, seriously. McNabb is off to a slow start this season, and has fallen out of whatever Fantasy favour he enjoyed at the beginning of the season. He did post decent numbers last week, though, and more of the same could be in store as he faces the porous Arizona pass defense, which has surrendered an average of 282 passing yards per game. Don’t look to McNabb to be much more than a one-week pickup, but if your regular signal-caller is on a bye the veteran could be worth a look.

Mark Sanchez, New York Jets: This may be the only time you see Sanchez’s name as a potential waiver-wire pickup, and the Troll’s endorsement has less to do with Sanchez’s talent than the defensive ineptitude of his Week Five opponent: the New England Patriots. The Pats have been truly gruesome against the pass this season, surrendering a lofty 369 yards per outing — so perhaps even Dirty Sanchez can cobble together a serviceable line against the Pats’ permissive pass defense. Don’t set the bar too high, but if you’re in a pinch for passers, Sanchez just might have a shot at Fantasy relevance this week.

Ryan Torain, Washington Redskins: The Troll tries to advocate love and tolerance, but coaches like Mike Shanahan severely test that peaceful mantra. Shanny went Don Nelson on us again Sunday, ditching heretofore-top back Tim Hightower in favour of Torain, who had been inactive for the first three games. Torain responded with 135 yards and a touchdown, and he looks to have vaulted over Hightower — who reportedly suffered a shoulder injury — into the top spot on the depth chart. Grab Torain if he’s available, but know that he’s not much of a receiver, and that Nelly… errr… Shanahan could change his mind again at the drop of a hat (or football).

Isaac Redman, Pittsburgh Steelers: Starter Rashard Mendenhall has been nothing short of mediocre this season, and now he’s nursing a sore hamstring and probably won’t practice this week. Redman, meanwhile, is averaging 4.9 yards per carry in limited action and, at 230 pounds, he could be a force at the goal line. We see the Steelers calling Redman’s number frequently this week — even if Mendenhall manages to make it onto the field come Sunday. Mewelde Moore is also in the picture, but he’s more scatback than feature back — and is only worth consideration in very deep PPR leagues.

Stevan Ridley, New England Patriots: Ridley burst onto the scene with 97 yards rushing and a touchdown in Week Four, while displaying some of the form that prompted the Pats to spend their third-round draft pick on him this year. Ridley clearly outplayed Benjarvus Green-Ellis, but it’s hard to imagine Boston Legal ceding the goal-line work to the rookie just yet. Still, Ridley’s breakout performance makes him a must-add in most Fantasy leagues, and he can be immediately deployed as a starter at a flex position.

Preston Parker, Tampa Bay Buccaneers: Last year’s breakout star Mike Williams is drawing all kinds of defensive attention this season, while Parker has been largely ignored — by everyone except Josh Freeman, of course. The unheralded wideout recorded a team-high 70 receiving yards and a touchdown in Week Four, and the youngster shockingly leads the Bucs receivers with 223 yards. If your league rewards return yardage, Parker is doubly valuable, as he has racked up 191 yards in kick returns thus far. There’s no guarantee that Parker’s hot streak will continue, but while he’s in such a great groove he warrants attention in deeper leagues — and in all formats that count special-teams yardage.

Jacoby Jones, Houston Texans: Andre Johnson’s injury is of course a huge blow to Fantasy teams everywhere, but from chaos comes opportunity — and in this case it’s wearing number 12. Jones possesses fine athletic ability and excellent speed, but how he’ll fare in a featured role remains to be seen. We think he’s worth a pickup simply because someone has to catch the ball in Houston, and Jones is the most physically gifted of the Texans wideouts. Kevin Walter also sees a boost in value, and the angular veteran is worth grabbing if Jones is already owned in your league.

Jermaine Gresham, Cincinnati Bengals: Gresham has posted 187 yards and two touchdowns thus far, putting him on pace for something in the neighborhood of 750 receiving yards and eight touchdowns on the season. Those numbers aren’t a flight of fancy, either, folks, the Troll has liked this kid ever since the Bengals drafted him last season. Rookie tight ends typically struggle with adapting to the pro game, so Gresham’s 52-471-4 line in 2010 was fairly impressive. He’s big, athletic and a perfect check-down target for rookie quarterback Andy Dalton — and Gresham is still available in about two-thirds of Yahoo! leagues. He’s a great bye-week fill-in or a soothing salve for any Antonio Gates-inspired aches and pains.

Nick Novak, San Diego Chargers: Novak has done a fine job filling in for the injured Nate Kaeding, converting all six of his field goal attempts and knocking home seven straight extra-point tries. The Bolts figure to be without top red-zone weapon Antonio Gates for at least a few weeks, so look for plenty of drives to sputter in field-goal range. Novak’s career record is nothing special, but he’s worth a look as a bye-week replacement while he’s kicking for the potent San Diego offense.

Cincinnati Bengals: If your regular Fantasy D is on a bye week, you may want to have a look at the Bengal defense, which currently ranks first in fewest yards and sixth in points allowed per game. But wait, the news gets better: The Bengals travel to Jacksonville this week to face the woeful Jaguars, whose offense ranks last in points and next-to-last in total yards per outing. Cincy may give you a nice double-play opportunity, as it faces the punchless Indianapolis Colts in Week Six. Their turnover and sack numbers aren’t great, but the Bengals have been very stingy thus far — and look like a defense that’s on the rise.

Mason Foster, LB, Tampa Bay Buccaneers: The Troll has had Foster on the IDP radar ever since the Bucs tabbed him with their third-round pick in this year’s draft. Foster is fast, aggressive and tough — a perfect recipe for a ‘backer in the Tampa Two — and has a definite nose for the football. The rookie leads the Bucs in total tackles with 26, and he has also recorded a pair of sacks. It’s still early in his career of course, but Foster is showing signs of becoming the latest in a long line of elite defensive players who have donned Buccaneer garb over the years. Like this guy, for instance — a legendary player and a true class act off the field — may he rest in peace.

Pat Angerer, LB, Indianapolis Colts: Angerer currently sits atop the league leader board with 50 total tackles, and the action should continue to find him while he’s manning the middle for the Colts. The Indy offense (or lack thereof) should ensure that the D is on the field early and often, which should spell plenty of opportunities for the second year linebacker. Angerer doesn’t project for big sack or interception numbers, but if your league rewards tackles and assists he should definitely be a part of your Fantasy plans.

By Buck Davidson
This entry was posted on Wednesday, October 5th, 2011 at 8:33 am and is filed under Buck Davidson, FOOTBALL, The Wire Troll. You can follow any responses to this entry through the RSS 2.0 feed. You can leave a response, or trackback from your own site.