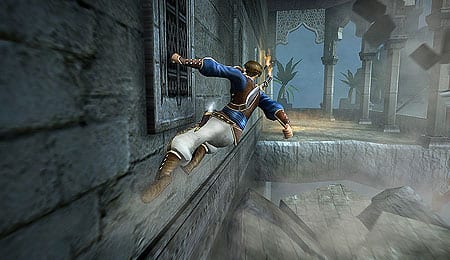 See this fine gentleman running sideways? By the next game, he turns into a heavy metal-loving douche bag.

Prince Of Persia has seen many iterations over the past 20 years, from its groundbreaking 2D beginnings (random personal fact: I first played that in seventh grade on Dartmouth Middle School’s only Mac computer) to last year’s action flick starring Jake Gyllenhaal. Perhaps the most beloved version of the Prince came in the form of a game trilogy on the last generation of hardware. The Sands Of Time (2003), Warrior Within (2004), and The Two Thrones (2005) took the original formula created by Jordan Mechner and brought it into modern storytelling, game mechanics, and visuals. Seven years later, this version of the Prince is back, now upscaled to 720P graphics. Is it worth your time to revisit this series of games or should you just visit the 2008 version (with no story relation)? Let’s take a look.

Each game in the trilogy was built on the same engine, so the basic controls work the same. Two face buttons control your weapons (primary and secondary, which could mean a dagger depending on which game you’re playing), another face button causes the Prince to jump or roll. Two trigger buttons provide alternate camera angles — useful when trying to survey all of your possible platforming options. The other two trigger buttons control the Time Rewind feature, which is essentially a get-out-of-jail free card should you miss a jump or time a trap wrong, and the block button.

Combat varies from game to game. The Sands Of Time is more about timing — dodging, blocking, and striking against multiple enemies. Warrior Within adds in two-weapon combos similar to God Of War and its many knock-offs. The Two Thrones also includes a stealth element, allowing the Prince to strike from the shadows in what is essentially a quicktime moment.

The controls are crisp and responsive; however, the camera controls on the right analog stick are something of a nightmare. The Sands Of Time came out in 2003, with each subsequent title a year apart. Dual-analog movement/camera control was standard by that point, so it’s surprising that these camera controls are so poorly designed. There are subtle differences from game to game, but for the most part, the camera rotation is only in the horizontal direction. Moving the right analog up and down does a weird mix of tilting and zooming, and most of the time the camera snaps back to level rather than staying where you put it. This can be especially frustrating when platforming — after all, you’re trying to get from A to B and if you can’t hold the camera where you need it, it takes a little bit of faith (or the Sands Of Time) to get there. Fortunately, the designers have placed the default camera views in mostly helpful, effective position. It would have just made more sense to give more freedom to the camera.

These last-gen conversions have been pretty consistent in their graphical quality. That is, the backgrounds — now upgraded to HD — look great while the character and environment models look aged but still work. Because of the improvement in resolution, everything looks crisp and clean despite not being the detailed facial models and animation that we see on games that push the boundaries of graphical prowess. All of the major characters have a slightly cartoonish feel, and this grants a little more leeway in the less-detailed models in comparison to today’s games.

It should be noted that, like the God Of War re-releases (and un-like the recent Tomb Raider Trilogy), all video sequences are in the original standard-def resolution. I’m not sure why we can upscale DVDs to look pretty good but video files on a game disc look pixelated and awful. To make matters worse, Ubisoft hasn’t re-cropped the video to show in the widescreen of HDTVs. Instead, it’s taken the original 4:3 resolution and stretched it to 16:9, which means that not only will you see a noticeable difference in quality between game and video sequences, everyone gets a lot thinner during gameplay too.

Voice acting and non-MIDI music have been with us since the days of the original Playstation, so there’s no excuse for bad audio. In this case, The Sands Of Time establishes the soundtrack with a mystical, fantastic, and tense feel while the Prince himself is a bit of cheeky douchebag with a slight British accent. Still, it’s fitting for the pace and tone of the game.

However, Warrior Within takes anything good from The Sands Of Time and leaves it behind, replacing it with a “gritty” jerk of a Prince, complete with dickhead quips and gravelly voice. The soundtrack has been adjusted accordingly, so now the Prince does his thing to horribly generic heavy metal riffs. It’s as if a boardroom committee of 50-year-olds tried to mash together what they thought teenage boys would like. (“Louder bass! More swearing! Call her a bitch!”) The result is so over-the-top and awful that I suggest you turn on subtitles and just mute the game — it’s much more enjoyable that way. Thankfully, The Two Thrones tones it way down and restores the original Prince voice actor and music so that you can enjoy the game without these things acting as a distraction.

Modern gamers will notice that the entire trilogy feels like a technical precursor to Assassin’s Creed. Not surprisingly, both franchises are developed and published by Ubisoft. From the Parkour-style movement to the parry-and-strike style of combat (at least in the first game), much of it will feel familiar. However, rather than the free-roaming world of Assassin’s Creed, these games are designed in sections.

The three games balance out platforming, dodging traps and puzzles, and combat. That balance changes from game to game. The Sands Of Time is the most platform/puzzle-intensive while Warrior Within focuses on combat — too much so for my taste, as if the combat-heavy areas combined with its tough-guy voiceover and heavy metal riffs made me feel like I wasn’t playing Prince Of Persia. The Two Thrones finds a more effective balance, taking in the combo combat of Warrior Within while keeping the platforming spirit of The Sands Of Time. Looking back on old review scores, The Sands Of Time received the most praise but when placed side by side, The Two Thrones is probably the best of the three.

All three games suffer from the aforementioned camera issues. Another common issue stems from the nonsensical deaths when the Prince falls from varying distanes. Here’s a guy who can run up a wall a good 10 feet, do a backflip, and land on his feet fine… yet a drop from a similar height kills him? Because of this strange limitation, platforming can be linear at times, forcing you to go into certain areas rather than opening things up. Had the Prince proved to be more consistently durable, there might have been more creative ways to address getting from point A to point B. As it stands, the game is pretty straightforward as it funnels you to your destination.

Oh, and a note to whoever built all the palaces and castles in the series of games: giant spinning spikes and blades aren’t the Martha Stewart way to decorate. Try a floor lamp and an end table instead.

These HD re-releases are a great purchase for a bargain price. Two of the three games (The Sands Of Time and The Two Thrones) still stand as very well-designed games while Warrior Within has its moments despite its many flaws. It’s a must-buy for fans of Assassin’s Creed that want to see where that series came from; fans of the original 2D computer game will enjoy the appropriate spiritual successor (sans Warrior Within) in this package. This isn’t the most polished re-release package we’ve seen (Square did a better job with the Tomb Raider Trilogy), but it’s certainly got plenty of bang for your buck.

By Mike Chen
This entry was posted on Tuesday, May 10th, 2011 at 1:28 pm and is filed under Mike Chen, Video Game Reviews. You can follow any responses to this entry through the RSS 2.0 feed. You can skip to the end and leave a response. Pinging is currently not allowed.