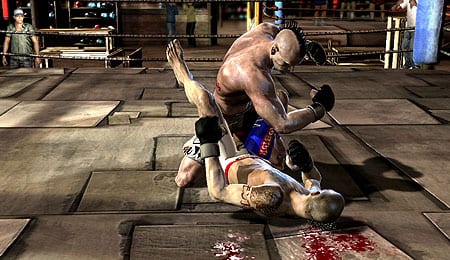 This is how the vast majority of bouts in Supremacy MMA end up.

Just under a year ago Electronic Arts tried to get involved in the Mixed Martial Arts craze when it released EA Sports MMA. However, despite critical acclaim and a roster dotted with recognizable names, sales struggled without the UFC license. Into that climate 505 Games brings Supremacy MMA, which offers a grittier, unsanctioned take on the sport with pervasive over-the-top violence — but does it do enough to stand toe-to-toe with EA and THQ’s titles?

One of the touted features of Supremacy MMA is a control scheme that’s more akin to a fighting game like Mortal Kombat than the simulation-oriented UFC Unleashed series. That sounds good in theory. In practice it’s another matter. Rather than feeling smooth and fluid, striking takes on a bizarre queuing effect that will have you pressing a button several times before animations catch up with your inputs.

This issue, which also plagues clinching and ground fighting, is due to the game’s bizarre blocking and parrying systems that constantly offer each player chances to stop their opponent. For instance, if you try to execute a ground transition you’ll hit the button… and then wait while the counter button appears on the screen. If your opponent fails to counter then you’ll make your move. This undermines the flow and results in choppy combat.

It also takes a while to get accustomed to the timing, and Supremacy MMA does you no favours in that regard by presenting one of the most user unfriendly tutorials I’ve ever seen. Rather than walk you through one step at a time, the game waits for you to trigger the next instruction against an A.I. foe that is whooping your ass throughout the process. There’s little better than being told to throw strikes from a standing clinch only to have the computer take you down and pound on you for 45 seconds (thanks, that’s definitely helping me learn the game).

Essentials like character models and move animations are solid enough. Raining down punches on a prone opponent and cinching in submission holds is satisfying, and the game’s “highlight knockouts” (which play out in slow motion) are fun to watch. There are also copious amounts of bloodshed and some nasty looking broken bones.

Beyond the basics, however, things don’t hold up too well. The game’s story mode is told through a series of comic cut scenes that do nothing to draw you into your fighter’s world. Pre- and post-fight animations never vary and the various arenas fail to impress.

With a soundtrack dominated by completely generic heavy metal music and sub-par voice acting in the story modes, Supremacy MMA underwhelms at every turn on the audio side.

Developer Kung Fu Factory’s eschewed the more technical aspects of mixed martial arts in an effort to create a more accessible and user-friendly game. To that end there is no need to manage your stamina — body parts do take damage that reduces the effectiveness of your attacks, but you never actually tire from attacking — or beware flash knockouts as neither element exists here. Instead each fighter has health and adrenaline meters.

The health meter is just like a fighting game in that when it runs out you’re done. That means you can knockout an opponent with a knee to the ribcage or a simple leg kick (if it exhausts the health bar you’ll actually break the leg). I guess that’s fine from a gameplay perspective, but it does seem silly to watch a completely undamaged body part crumble from a weak shin kick after your opponent just survived 20 straight punches to the face.

As for the adrenaline meter, it’s broken up into segments that fill as you successfully land strikes or block/parry incoming blows. You can utilize it one section at a time to earn a boost in the stick-waggling submission mini game (offense or defense) or engage in a “rush” mode by pulling both triggers simultaneously. Do this and you’ll deal increased damage to an opponent.

It’s not a bad system, though unfortunately the bouts in Supremacy MMA are handicapped by a handful of serious issues. I’ve already touched on the poor pacing in the controls section, but that’s just the beginning as despite a wide range of available fighting disciplines to choose from there is one strategy that dominates: ground and pound.

That’s because being a standup fighter doesn’t pay off regardless of your discipline. Standing strikes — or even perfectly timed counters that land flush — don’t do sufficient damage. It took no more than a few fights for me to realize that my best bet was to take down my opponent and just unload on him. Once you have them down it’s relatively easy to keep them there by mashing “X” or “Y” until your punches stop, which is your cue that your opponent is countering. Block it and go back to attacking. Rinse and repeat.

A lack of variety in bouts is echoed with the lean amount of content available. There are 14 selectable fighters (including two women), most of whom have a story mode that consists of a similar “fight your way up the food chain” theme. And that’s it for offline. There’s no fighter creation or lengthy career mode to engage in. You earn experience points and level up, but you only unlock new costumes and don’t gain attributes or new moves.

Online play is also available, though it’s sparsely populated. I made several forays online in search of an opponent and came up dry. When I did finally find a few matches, they were plagued by performance issues. That lack of stable online multiplayer as well as no progressive career mode creates legitimate concerns about Supremacy MMA’s long-term enjoyment value.

Supremacy MMA wanted to differentiate itself from its contemporaries by presenting a harder edged version of the sport. In some ways it succeeds. However, in others vital areas it comes up short. It’s fun in the right dosage, however I’d advise all but the most ardent combat game fans to wait until it drops down into the US$20 range.

By Herija Green
Tags: Electronic Arts
This entry was posted on Tuesday, October 4th, 2011 at 9:51 am and is filed under Herija Green, Video Game Reviews. You can follow any responses to this entry through the RSS 2.0 feed. Both comments and pings are currently closed.