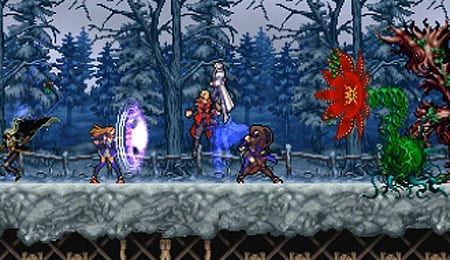 With up to six players, it’s good to outnumber poison plant beasts.

[Note from the Editor: this is off topic, but I wanted to add a quick note to congratulate RotoRob Baseball Editor Tim McLeod for taking home the Championship in the ultra-competitive Fantasy Sports Writers Association Fantasy baseball league this season. Why Tim has not been invited into a Tout Wars league yet is a mystery, but my guess is that they’re afraid he’ll kick their asses.]

A few years ago, there must have been a water cooler discussion at Konami about how Castlevania would have looked done up like its old multiplayer arcade games (Teenage Mutant Ninja Turtles, The Simpsons, X-Men). At least, I think that’s what happened because Castlevania: Harmony Of Despair basically takes that as a starting point — if you’re a fan of the series (particularly the 2D games seen mostly on Nintendo handhelds), then here’s your star-studded cast of playable heroes. Then you add in timed levels, exploration ripped straight out of previous series games, a mix of competitive and team-based co-op, and enough looting and grinding to make Borderlands players jealous, and Harmony Of Despair is born. Previously released on XBox Live, Harmony Of Despair now graces the Playstation Network, complete with additional levels and characters to round out the game experience.

Is it any good, though? Last year, Herija Green reviewed the XBox release and gave it a 4. New console, new year… same result? Let’s find out.

Harmony Of Despair’s controls are pretty straightforward in the platformer/action realm — jump, double-jump; attack, secondary attack, etc. The one unique element is the camera control. While all movement is done through the left analog (or d-pad, if you’re feeling old school), the right analog allows you to pan the camera to see other level areas. A click on the R3 button zooms the camera to one of three settings: normal, far, and really far.

What you make of that, though, depends on the character you use, as each one has his or her own special quirks that make use of the environment, enemies, button taps, or all of the above. The good thing is that Konami has made the timing and crispness consistent across all characters. Of course, the levels are punishing, with plenty of enemies throwing arcing projectiles which force you into spewing fire which force you into spikes — you should have dodged left instead of right!

If Harmony Of Despair is a spiritual successor to the other 2D Castlevania games of the past few years, the graphics certainly support that. There’s nothing in here that couldn’t be done on PS2 – or PSone, for that matter, other than the screensize of an HD display. Characters and backgrounds are all sprite-based, so any objects rotating or zooming on the screen are more Super Castlevania 4 (SNES) than Lords Of Shadow (current gen). Of course, like the recent Mega Man games, this is intentional. In fact, the entire experience intentionally feels like something from a decade ago, from the over-the-top voice acting to the awesome rock-guitar-over-MIDI-orchestra soundtrack. If you saw it or heard it in Symphony Of The Night, you’ll pretty much get it here, including the sprite pixelation when objects zoom to the screen.

It’s all a style choice. For 2D Castlevania fans that have been playing on handheld screens over the past few years, this is probably exactly what you want. For fans of Symphony Of The Night, it’s probably a fun exercise in nostalgia. And for the pickier set of current-gen gamers, they’ll probably wonder why the graphics don’t look better.

I keep referencing Symphony Of The Night, but it’s really the most reasonable starting point for everything, including gameplay. With only seven levels (six from the original release, one free DLC) to pick from, Harmony Of Despair almost feels like it came from an alternate universe, one where the PSone games had multiplayer tacked on. In that scenario, Harmony Of Despair would be the theoretical multiplayer component with slight RPG/looting aspects.

Your basic level scenario for Harmony Of Despair is this: Start at Point A with one or more characters and a time limit. Explore the level horizontally and vertically to loot stuff and kill monsters, solve a few puzzles to gain area access, then beat the boss for a reward. In other words, it sounds like many Castlevania games. The problem is that there’s not a lot of variation given to this formula in terms of level design. Instead, the game approaches it from the other perspective – the same levels are used but they become different experiences depending on which character you use or how many people you play with. Your progression is less about completing levels and more about looting equipment and increasing character capabilities – for example, Soma Cruz has the ability to learn attacks from a variety of enemies.

As is the tradition with 2D Castlevania, the game is tough. You want old school? There’s no tutorial level here; you better read the control setup in the options menu because you’re thrown right into everything. Character selection does give you an overview of basic equipment and powers. With only seven levels (additional levels available for download) — each meant to be completed in 30 minutes or less — the difficulty is intentional; it’s there to get you to come back, only stronger and better than the last time around.

As you pass levels (or die), your character inventory and progress save. Co-op experiences are generally light on narrative drive and this is the same thing here. Instead, it’s the combination of hunt/loot/explore. With up to six players and a scaled-out perspective, it can be dizzying and ridiculously fun at the same time. Throw in an additional competitive mode, along with a couple of beers, and you’ve got a jolly good vampire-killin’ night with friends, either local or online. However, there’s very little depth, and as a single-player experience, your enjoyment really depends on if you like level grinding, because in the end, that’s what Harmony Of Despair is. For PSN users, the good news is that the game comes with the DLC previously released on other platforms, so you do get nearly twice as many levels as the original game package.

A nostalgia trip? An HD excursion of the handheld experience? A multiplayer mash-up of Castlevanias past? Harmony Of Despair is all of these things. Unfortunately, it never amounts to more than the sum of its parts. The single player experience at the PSN price point gets a 2.5 and the wild multiplayer possibilities get a 4, so your final score is somewhere in between — but weigh in your own personal bias for/against multiplayer and 2D Castlevania to before you plunk down your hard-earned bucks.

By Mike Chen
This entry was posted on Friday, September 30th, 2011 at 10:17 am and is filed under Mike Chen, Video Game Reviews. You can follow any responses to this entry through the RSS 2.0 feed. You can skip to the end and leave a response. Pinging is currently not allowed.