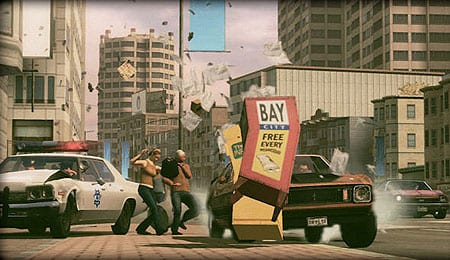 Amazingly no pedestrians were injured in the making of Driver: San Francisco.

As we’ve undoubtedly mentioned on those rare occasions that we’ve covered racing games over the years, we are not a big fan of the genre. The desire to blitzkrieg through locations at breakneck speeds with pinpoint control has simply never held much appeal. As such, I have tended to gravitate toward shooters and RPGs where deliberate movement and exploration are rewarded. That being said, Ubisoft’s Driver: San Francisco caught my attention, and as it turns out it was for good reason.

Then, of course, there’s the game’s hook: the ability to “shift” into any non-enemy driver’s body and control that vehicle. Hitting “A” will pull you out of your current body and allow you to navigate a map of the city to select a new host. The map can get wonky every now and then, but overall it works like a charm. Fairly early on you gain the ability to do a rapid shift to jump back and forth between two vehicles. This creates the potential to pull off some cool moves.

Some elements could’ve been tighter, but the game doesn’t require true precision so the modest shortcomings that exist here don’t really hinder the overall experience.

It didn’t take long for Driver: San Francisco to wow me with its cut scene graphics as the detail in the characters’ facial animations is outstanding. It’s really a testament to the developers that so much work was put into something that would be a peripheral piece of most racing games, but clearly they wanted you to invest in the storyline and used eerily lifelike graphics to do just that.

Once you hop into the in-game world you’re treated to an excellent recreation of San Francisco, populated with lots of different makes and models of cars. All of the vehicles look good, and the game impressively maintains its high frame rate no matter how many cars, objects and/or explosions are on the screen at one time. It’s a great looking title.

The high production values carry over to the voice work as well with all of the primary characters making a strong accounting for themselves. Like the detailed faces, the voice acting adds credibility to a patently absurd story and makes investing in the characters’ journey easier. Lots of pulse pounding tunes add a nice touch, as do sound effects which create an impact.

Set after the events of Driv3r, Driver: San Francisco once again follows the story of John Tanner (you), who is tracking the transportation of incarcerated gangster Charles Jericho. During the opening moments, Jericho escapes custody and flees with Tanner in pursuit. Following the escape, Jericho eventually gains the upper hand and causes a serious accident that leaves you in a coma. And then things really start getting interesting.

That’s because most of the game takes place inside Tanner’s coma, where he’s able to “shift” into and out of any driver he wants. It’s not the most original plot device out there — in fact the whole setup is pretty similar to the television series Life on Mars — but it serves as the backdrop to what is probably the most innovative gameplay mechanic I’ve seen in a racing title.

Being able to seamlessly jump out of your own body and into any number of others dramatically alters how you approach missions. Whereas in a standard driving game you’d be pigeonholed into simply cornering faster than an opponent in a race or weaving through traffic to avoid pursuit, here you can shift into a car traveling the opposite direction and veer it right into a pursuer. It doesn’t take long to grasp the potential, and once you do it’s off to the races (so to speak).

You start with limited access to the city of San Francisco, and as you progress you unlock more sections to explore. A top-down map allows you to quickly travel across the area and select any of the available missions or simply jump in any vehicle and drive. There are a ton of missions to choose from across a number of categories, and even within those broader groupings are subsets that provide a lot of variety.

For example, there are a series of dares scattered throughout the city that might ask you to drift a specific number of meters or do X amount of stunt jumps in a time limit. Even the game’s races have some diversity to them. Straightforward checkpoint races do exist, but they’re supplemented by others that force you to ram objects to earn additional time and even ones where you’re asked to handle two vehicles at once to ensure they finish in the top two spots.

These peripheral objectives appear in blue on your map while yellow missions are storyline related, though by no means do they all directly involve Tanner. Instead the game makes use of its unique omnipotence to flesh out the story through the eyes of bit players. Finish these primary quests and you’ll advance to the next chapter.

Everything you do in Driver: San Francisco, from overtaking vehicles as you drive through the city to completing complex takedown missions, earns willpower points that act as in-game currency. You’ll use them to purchase new garages and additional vehicles as well as upgrading your abilities (such as increasing your boost meter or the speed at which your skills recharge).

However, even with a solid progression system and plenty of racing variety in place, the game does eventually start to take on a “been there, done that” feel — it’s just harder versions of the same tasks you’ve been performing since early on. And speaking of harder, there are some frustrating difficulty spikes in the later stages as well that could induce fits of controller throwing.

I’d also be remiss if I didn’t mention that while the primary storyline is fairly well told despite its absurd premise, a lot of the side and peripheral story missions convey a goofier vibe that doesn’t fit. I’m sure many won’t care, but I would’ve preferred a more consistent tenor.

Beyond a content-rich story mode, Driver: San Francisco also boasts a fully featured multiplayer for both local and online play. What’s here is good and surprisingly diverse, ranging from standard races to co-op capture the flag and much more. Driving against other human players toes the line of being fast-paced and chaotic without feeling like overkill. Also, special kudos are in order for the implementation of the shift system online, which does away with the single-player ability to shift at will and forces racers to use the power strategically to maximize its effectiveness.

Despite some issues with spotty controls and uneven difficulty, Driver: San Francisco is the most fun I’ve had with a racing title in years. It offers a lot of content and a strong multiplayer that make this game well worth the investment.

By Herija Green
Tags: Racing games
This entry was posted on Thursday, September 29th, 2011 at 9:39 am and is filed under Herija Green, Video Game Reviews. You can follow any responses to this entry through the RSS 2.0 feed. Both comments and pings are currently closed.