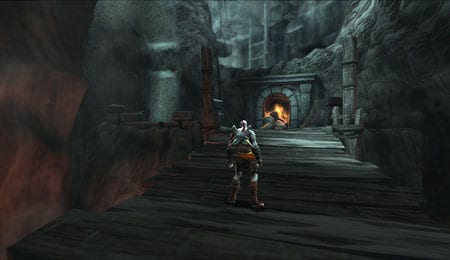 Kratos pauses as everything suddenly appears much larger than usual…

With apologies to Uncharted, Killzone, Resistance and others, God of War rates as Sony’s signature exclusive. It’s spanned five titles across three different consoles (PlayStation 2, Portable and PS3), and Sony even thought enough of the original PS2 adventures that it updated them into high definition and repackaged them as the God of War Collection.

In that same vein, Sony has taken Kratos’ two handheld tales and upgraded them for life on the PlayStation 3. Dubbed God of War: Origins, this collection presents gamers with the chance to either replay the tales on a big screen or, for those that never took the PSP plunge, experience both titles for the first time.

Freed from the limitations of the PlayStation Portable (read: no second set of shoulder buttons or right analog stick), God of War: Origins controls nearly identically to the other games in the series. About the only downers are that the evading role feels kind of clunky, and the quick-time button presses in Chains of Olympus are centred instead of corresponding to their position on the controller.

Considering these games began their lives on the tiny PSP screen, it’s actually pretty incredible how good they look in HD. Grandiose settings and epic scale have long been hallmarks of the God of War games, and that holds true here as well. That said, there’s a noticeable difference in graphical quality between Chains of Olympus (released in 2008) and Ghost of Sparta (released last November) as developer Ready at Dawn clearly learned how to extract more power from the hardware.

With Chains of Olympus you’ll notice a lot of very plain looking textures, and when it zooms in on Kratos it can look a bit outdated. There’s also some stiffness in the characters’ movement. Conversely, Ghost of Sparta looks great. When I reviewed it on PSP last year I wrote that it was “without question, the best looking game on the PSP,” and that praise is still warranted. It’s sharp, detailed and makes good use of camera angles to create unique perspectives.

Since both games were fully voiced by the same cast, the performances are top notch and the soundtrack is great as well. There did seem to be some issues where the audio levels would fluctuate in spots with dialogue getting louder and softer, but it’s a mild complaint.

As already noted, God of War: Origins contains two games: Chains of Olympus and Ghost of Sparta. The former actually serves as a prequel to the original God of War, following Kratos after he had been saved by Ares but before usurping his power and ascending to Godhood. In this tale, Kratos continues to pay his debt to Olympus by helping to locate and rescue Helios, the sun god.

The collection’s other title, Ghost of Sparta, takes place in between God of War and God of War II with Kratos finding no peace from haunting visions despite killing Ares. It’s arguably my favourite plotline in the series as it delves more deeply into Kratos’ torment and allows you to feel for his suffering, something the other games rarely did. For a more comprehensive look at Ghost of Sparta you can check out my full review from last year.

Combat is a common thread across all the games in this series, and if you’ve played any of the other titles you’ll be immediately at ease. Kratos still inflicts all kinds of pain with his Blades of Chaos/Athena as well as secondary weapons and magic, which are different for each installment. However, you’ll find there are many of the same enemy types across both games.

Another thing I noticed as I played through the games again is that they seemed easier than they did on the PSP — and also easier than God of War III, which I recently completed. Perhaps it was just my perception, or perhaps the difficulty settings on the handheld were dumbed down a bit to compensate for screen size and control limitations. Either way, I’d suggest playing a setting above what you normally would to maintain the challenge level.

It may seem obvious, but I feel it bears mentioning. As ports from more limited hardware, God of War: Origins is not going to have the same depth in some areas as those that were made for consoles. That means smallish things like repetitive killing animations and fewer enemies on the screen at once, but it also means there aren’t as many awe-inspiring boss fights, either.

In the grand scheme of things these are minor issues, especially when you consider that for US$20 less than a new PS3 game you’re getting arguably the two best PSP games ever, constituting north of a dozen hours of gameplay. Also included are all the bonus materials as well as trophy support for each game individually, which is a nice touch.

Sure, God of War: Origins shows its relatively humble, pocket-sized roots at times, but at the end of the day these are two excellent games that have been ported with great care. If you haven’t played Kratos’ handheld adventures you’re in for a treat. And even if you have, it’s worth going back and replaying them in their new HD glory.

By Herija Green
This entry was posted on Friday, September 16th, 2011 at 11:16 am and is filed under Herija Green, Video Game Reviews. You can follow any responses to this entry through the RSS 2.0 feed. You can skip to the end and leave a response. Pinging is currently not allowed.