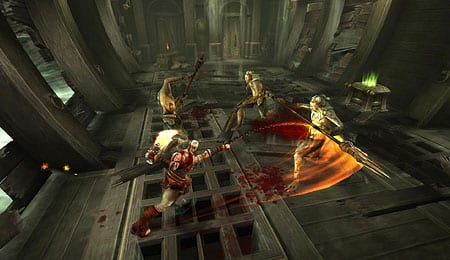 It cannot be overstated how good Ghost of Sparta looks.

I don’t do a lot of traveling, so my PlayStation Portable spends much of the average year as a glorified paper weight and occasional restroom companion. All that changed when God of War: Ghost of Sparta showed up on my doorstep. Developer Ready at Dawn once again squeezes every last ounce of power out of the PSP to create a masterpiece that reinvigorated my love of the franchise.

Some games were seemingly made for the PSP, and Ghost of Sparta feels like one of them. Anyone that has played the God of War series on any platform should have no trouble adapting as heavy/light attacks, grabbing and jumping remain constant while blocking and evading are smartly assigned to the shoulder buttons. Mapping magic to the d-pad takes a little getting used to and does necessitate an unnatural motion, but given the system’s limitations it makes the best of it.

This is, without question, the best looking game on the PSP. I was consistently amazed by the job Ready at Dawn did throughout Kratos’s adventure, often stopping just to check out the detail work or incredible sense of scale when the camera pulled back. On top of the amazing backgrounds, the game also does a great job of simulating weather effects to add a more lifelike touch.

Kratos’s redesigned character model looks fantastic as well and will even become covered in blood during fights a la God of War III. Plus, watching him wield his signature blades now imbued with flames never gets old as they just nailed the fire effect perfectly. Kratos’s spells look really cool as well, particularly when lightning crackles through the air and courses through your enemies. Add to that a varied collection of hideous foes and brutal pre-rendered kills and you’ve got a visual powerhouse.

I should note that I did encounter a couple of cinematic scenes coming to a complete halt while the disc loaded feverishly, but considering that I own a launch era PSP I can’t discount the possibility that the struggles were more on the hardware’s end.

While perhaps not the mind-blowing effort that the graphics are, the game’s audio is still excellent. All your favourite voice actors are back, giving Ghost of Sparta both continuity as well as that big budget feel befitting a series of this stature. The soundtrack matches the game’s tenor flawlessly, and the sound effects are pitch-perfect.

Set immediately after the events of the original God of War, Ghost of Sparta tells what can best be described as a more intimate tale, which fleshes out Kratos’s origins. It turns out that defeating Ares has not assuaged his guilt-riddled visions. In fact, they’ve gotten even worse, which leads Kratos to seek out the subject of these dreams in an effort to right a wrong done decades earlier.

What follows is a spirited story that arguably does more to create sympathy for Kratos than the series’ other four games combined. Much of that is accomplished by keeping things relatively grounded with major gods like Athena and Poseidon playing bit parts while Zeus, the target of your rage in other games, fails to even make a cameo. Instead, your quest to reach The Domain of Death for an eventual showdown with Thanatos takes centre stage and keeps the focus squarely on you.

Combat in Ghost of Sparta remains essentially unchanged, which is a good thing given how well that brand of fighting translates to the PSP. However, Kratos does have a few new tricks up his sleeve, including a pair of new spells and a shield/spear weapon to go along with his iconic Blades of Athena. The way you attack with the blades hasn’t changed, but they can now be charged with fire. This can be done simply to inflict more damage, though there are also enemies whose armour can only be destroyed with the fire — a third meter has been added to monitor the flame’s availability.

A handful of improvements have also been made over Chains of Olympus, Kratos’s first portable tale, including some epic boss battles that were conspicuously absent last time and are a staple of the series. Another nice touch was having the buttons for Quick Time Events show up on the screen as they appear on the PSP. For example, a prompt to push the square button will always appear on the left side of the screen, which greatly reduces the number of mistakes.

As strong as all those elements are individually, where Ready at Dawn truly excels is in the pacing of Ghost of Sparta. Combat and platforming sections are interwoven impeccably with story elements mixed in to keep things pushing forward. I never felt like there was too much down time between fights or too many battles strung together in hrapid succession. Instead, Ghost of Sparta struck the perfect chord that always had me looking forward to the next section.

In terms of longevity, it took me roughly seven hours to clear the main game on Hero difficulty, which included deaths and some exploration. After finishing you can try again on harder settings or take part in the Challenge of the Gods, which tasks you with things like fighting off waves of enemies without taking a single hit. There’s also a combat arena where you can customize any fighting experience you’d like as well as The Temple of Zeus where red orbs can be “sacrificed” to unlock collectables.

Despite everything Ghost of Sparta offers, it isn’t perfect. There are times when a group of enemies will knock you to the ground and continuously attack without allowing you to get up, which is an element of old school gaming I’d be only too happy to never see again. The camera can also present problems. More than once Kratos became completely obscured by a larger enemy, making it difficult to evade attacks. In that same vein, there were also instances when I’d try to grab a stunned enemy, but miss because I couldn’t tell which way Kratos was facing.

Ghost of Sparta is a technical marvel with fun combat and an engaging storyline. It also ranks as my favourite PSP title to date and is a testament to just how far portable gaming has come. If you own a Playstation Portable this must be in your collection. The gods demand it!

By Herija Green
This entry was posted on Tuesday, November 16th, 2010 at 11:54 am and is filed under Herija Green, Video Game Reviews. You can follow any responses to this entry through the RSS 2.0 feed. You can leave a response, or trackback from your own site.