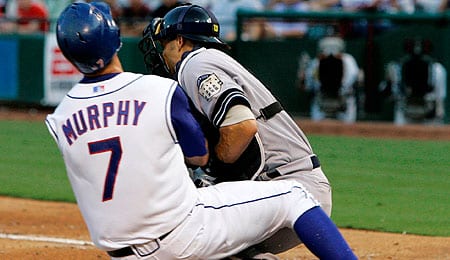 Injuries in the Texas outfield have allowed David Murphy to crash his way back to Fantasy prominence.

The end of another baseball season is drawing near and so follows my final edition of the Wire Troll for the 2011 season. I want to thank all our readers that followed the column this year and hopefully somewhere along the way we managed to steer you in the right direction in the pursuit of your league title. One of the rites of September is always the chase for late-season counting numbers in the pitching categories, so this week I’ve listed some starting pitchers that could be available for those looking to stream pitching. Have a great stretch drive and stay tuned as I begin my annual fall tradition of reviewing some of the happenings on the other side of the Pacific. Without further ado, let’s give the Troll one last spin for 2011.

David Murphy, OF, Texas Rangers (CBS: 33 per cent owned, Yahoo!: 36 per cent): Julio Borbon is lost for the year after undergoing ankle surgery and Nelson Cruz has hit the DL with yet another hamstring issue. Murphy has stepped it up big time and has been one of the hottest hitters in the game over the past several weeks. Since moving into the lineup and getting full-time at-bats, he’s gone 24-for-61 with four homers, 18 RBI, 11 runs scored, and two thefts. The Rangers are going to need his hot bat if they are going to hold off the hard-charging Angels in the AL West.

Wei-Ying Chen, SP, Chunichi Dragons: We’ve all heard of Yu Darvish and the endless string of rumours concerning his pending arrival in MLB. While Darvish gets all the headlines, owners need to also be aware of 26-year-old Chen. If your keeper league allows for the acquisition of NPB players (as all should) an early claim could pay big dividends in 2012. Chen’s stellar career ERA of 2.57 will ensure he won’t be flying under the radar for all that much longer.

Jerry Sands, OF, Los Angeles Dodgers (CBS: 8 per cent owned, Yahoo!: unowned): Sands struggled in his first audition with the Dodgers earlier in the season, but with the season-ending knee injury suffered by Andre Ethier he should see regular at-bats down the stretch. In 370 at-bats at Triple-A Albuquerque, Sands mashed 29 homers with 88 RBI to go along with a decent .278 BA. He is the Dodgers’ future in left field and will have plenty of opportunities to prove that in September.

Lonnie Chisenhall, 3B, Cleveland Indians (CBS: 17 per cent owned, Yahoo!: 2 per cent): Jack Hannahan is currently dealing with a calf issue and the 22-year-old Chisenhall is stepping it up in a bid to show the Tribe he deserves serious consideration to be the everyday starter at the hot corner in 2012. Three big flies in his past four games is a good way to state his case.

David Cooper, 1B, Toronto Blue Jays (CBS: 1 per cent owned, Yahoo!: unowned): The 24-year-old sweet swinging Cooper was recalled from Triple-A Las Vegas Tuesday and responded in fine form by going 3-for-4 with two RBI in his first game with the Jays since mid-May. Adam Lind is dealing with a wrist issue and in the second half has seemingly reverted to his 2010 form, so expect the Jays to give Cooper — who spanked the ball to the tune of a .364 BA while claiming the 2011 PCL batting title — a good look down the stretch.

Jerome Williams, SP, Los Angeles Angels (CBS: 9 per cent owned, Yahoo!: 2 per cent): Each and every year we see players coming out of nowhere to contribute and we can add 29-year-old Williams to the list for 2011. What an amazing story. He hadn’t pitched in the bigs since being a member of the Twins back in 2007, when he struggled with his command before getting hurt. Since being promoted in mid-August, Williams has won three games and has been a huge factor in the Angels staying right on the heels of the front-running Rangers in the AL West. He has Oakland on the schedule this week followed up by what could be a two-start week in the last full week of the season. I’m betting the fairy tale season continues for the one-time top Giants’ prospect.

Wilin Rosario, C, Colorado Rockies (CBS: 6 per cent owned, Yahoo!: unowned): Rosario, 22, is going to get a long look down the stretch as the Rockies evaluate their catching options for 2012. He smacked 21 homers at Double-A Tulsa this year and could provide a nice late-season power boost in NL-only leagues.

Edinson Volquez, SP, Cincinnati Reds (CBS: 34 per cent owned, Yahoo!: 23 per cent owned): In his last two starts at Triple-A Louisville, Volquez struck out 23 batters in 13 IP while allowing only three earned runs. He’s scheduled to start Sunday against the Rockies and top prospect Drew Pomeranz, so we’ll know before the wire deadline Sunday evening if he can actually make it out of the first inning. Bid accordingly.

Streaming Options for the Week

Rick Porcello, Detroit Tigers (CBS: 53 per cent owned, Yahoo!: 15 per cent): @CWS, @OAK; has been solid at the back end of the Detroit rotation.

Joe Saunders, Arizona Diamondbacks (CBS: 41 per cent owned, Yahoo!: 9 per cent): @LAD, @SD; Saunders’ surprisingly solid season as the No. 3 man in the Arizona rotation is just one facet of a surprising season for the D-Backs.

By Tim McLeod
This entry was posted on Sunday, September 11th, 2011 at 12:46 pm and is filed under BASEBALL, The Wire Troll, Tim McLeod. You can follow any responses to this entry through the RSS 2.0 feed. You can leave a response, or trackback from your own site.